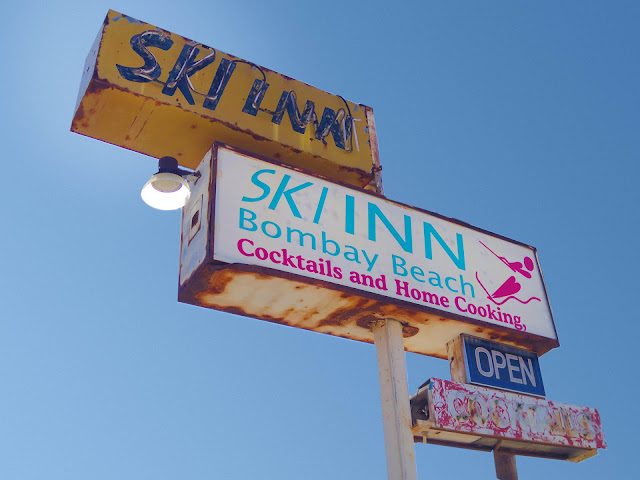 In the 50s and 60s the Salton Sea (about 50 miles southeast of Palm Springs, California) was a hot spot for vacationers from all over SoCal. It was a place where thousands of people fished, boated, swam and water-skied. In the last 40 years this “Sea” has been plagued with alternating drought and floods. Lately, it is shrinking and it often stinks from algae blooms. At the end of 2017 it will stop getting fresh water from the Colorado River and will eventually dry up. The shore line is already littered with dead fish and barnacle shells and the salt content of the water is rising. The town of Bombay Beach, now nearly abandoned, is on its eastern shore. Once this little burg had a vibrant marina but now the only remnant of its glory days is the Ski Inn, a pleasantly run-down bar/cafe. At 237 feet below sea level, it is at the lowest altitude of any bar in the western hemisphere. The walls are covered with hundreds and hundreds of decorated dollar bills—mementos from previous visitors: 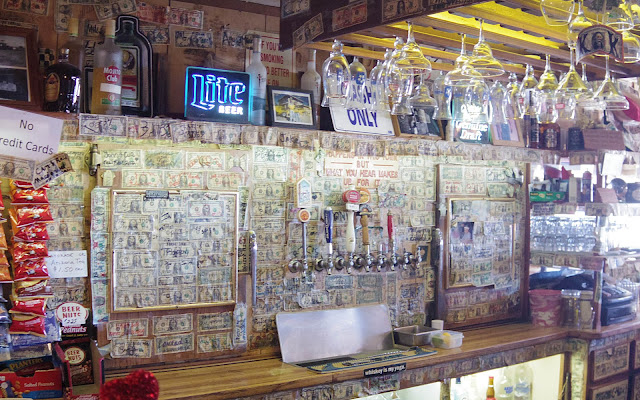 You might think this place would be depressing, but I found it to be a bit of funky heaven. The people who run it are very welcoming and the patrons, a mix of locals and tourists, were very friendly as well: 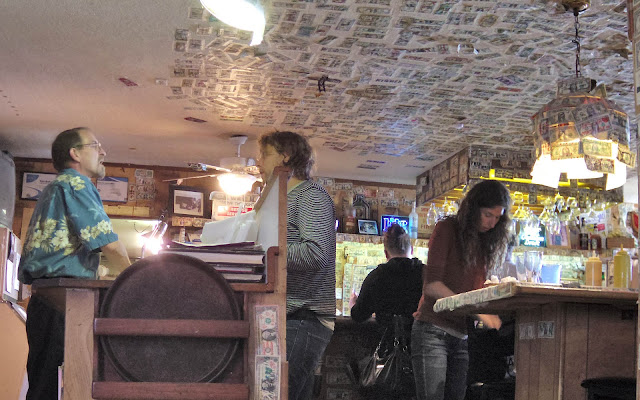 While we were there a group of women on a day-trip were celebrating with selfies and pitchers of mimosas :

Just off-shore from the beach is the center of the San Andreas fault, which was active as  recently as October 2016, making the long-term future of Ski Inn in jeopardy.

Visit it while you can!

Tomorrow: Salvation in the desert…

I've never been there, but I should include it on a Southwest desert tour someday. I didn't realize that i was below sea level.

There are several interesting, albeit sketchy, sights in that area—as you'll be seeing in the next couple of days.

I've been, myself. The whole area is just like another world from Minnesota, or from anywhere else, really.

I think you should should write more about your life in California.