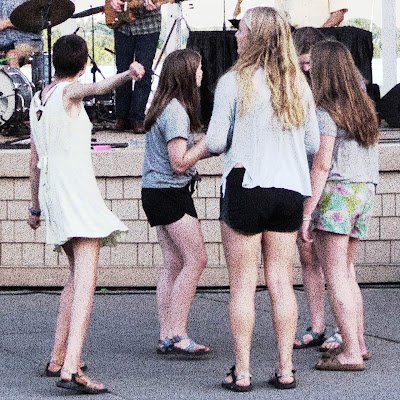 Andy went out to the garage. Opening the service door, he noticed that Jennifer’s car was no longer there and his own car had been put back in its usual position. Andy wondered how she could have done all this with him noticing. He went back in the house, and looked for any sign from Jennifer. Going to the bedroom and looking in the closet and drawers, he saw that all her things were gone. It was as if she had never been there.

He went back out, this time to the trash can, to where he had put her bloodstained dress. The can held only his usual garbage from the previous week. As he pondered this mystery, stupefied, he began to hear the sound of a band playing, wafting in from the nearby park. On impulse, thinking that perhaps he could clear his mind, Andy started to walk the two blocks to the park, as he had done many times in the past. When he was a child, living with his parents (in the same house where he now lived), the park was a refuge, a place to play childhood games, and a place for more complicated games when he was a teenager. They used to have bands in the park when he was young: but only “square” music for geezers. Now the bands that played were actually playing much older music relative to their ages than the squares did then. Andy hoped that Jennifer would be there.

The group on the bandstand was playing a mix of late 60s and early 70s music, FM rock staples, the music they had grown up with. There was a cluster of young women in front of the band, halfheartedly trying to dance to the sludgy mid-tempo folk-rock that the band was offering. There was one dancer, however, who was truly inspired. She was lithe, with a bounce to her movements that made it seem that she was even lighter than she looked. She began to interpret the songs via “jazz hands.” For a few moments, Andy forgot Jennifer as he watched her mesmerizing performance. He wished that he was young again, that he had been a dancer, that he would have had a chance to make it with her, even if only for a day, if only just to talk to her while he stood near her fire. When the song ended, Andy’s reverie snapped and he turned and began to scan the crowd. He saw a woman standing in the back, in sweats, near the pavilion. From the rear, it looked a lot like Jennifer. Making his way through the crowd, he soon reached her.

The woman turned around. It wasn’t Jennifer. He acted dumb, as if he hadn’t been the person who spoke. Andy became agitated, he needed a drink. He left the park and headed toward the Pub, wondering if it would be open for business again so soon after the shooting. Everything appeared to be normal as he approached. Stepping inside, he saw no trace of the events of the previous night. The booth where he and Jennifer had sat, as well as the floor near the door, had no trace of bloodstains. It was a little past eight and the crowd was sparse. The band was setting up their gear and everything appeared normal. Andy wondered who would be working the door that night. He sat down at the bar and, trying to act casually, ordered a beer, drinking it in a hurry. He ordered another. About halfway through that one, Andy began to feel a strong buzz from the alcohol.

“Excuse me, but there is a cover tonight.”

It was the bouncer that he had seen murdered the night before.


The Reader is serial fiction, published every Friday