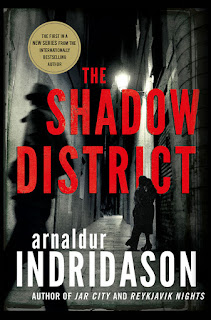 Indriðason’s back with this stylish “thriller” set in both past and current Iceland. The death of an old pensioner in modern Reykjavík re-ignites interest in a pair of old murder cases from the forties. Konrad, a retired police detective who is still consulted by the overworked police investigator Marta, who gives him some enigmatic clues about the dead man, starting the action. In a parallel narrative set in 1944, Flóvent, a Rekjavík detective, and Thorson, a Canadian military policeman, try to come to grips with the body of a murdered woman found behind the National Theatre building. Indriðason does a good job of intertwining the stories, each iteration of the story reveals more details yet somehow remains opaque until the very end.

This is evidently the start of a new series, there is no “Inspector Erlendur” in this book. The fact that there are four detectives (in two different eras) dilutes its dramatic center. Indriðason is trying to take his writing in a different direction, although many of the tropes are similar to the Erlendur books. Anyone familiar with Rekjavík will get a kick out of seeing familiar neighborhoods come to life on the page. The translation is good, one of the better efforts by Victoria Cribb.

Thanks, Batty! I've been wanting to read this, but wanted some kind of review that I trusted. I must have some kind of faith in your judgement after all these years.