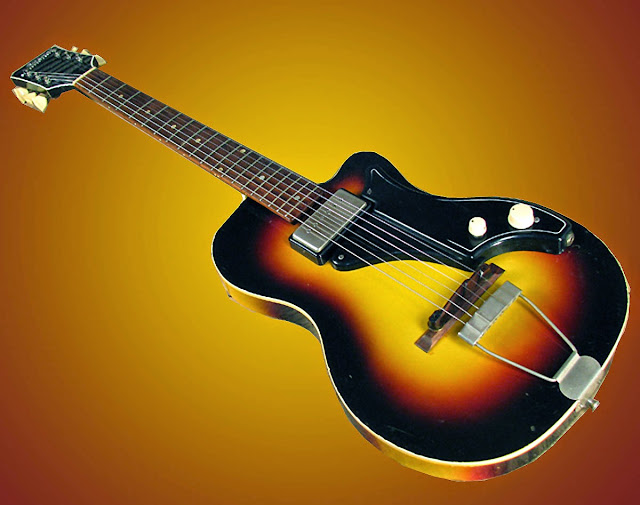 The little guitar that could.

I owned this guitar longer than any other. Unfortunately, its longevity came at a terrible price. Due to its low cost ($45 in 1975) and its slab construction this beginner guitar became a test bed for pickups, switches, knobs and other such nonsense. It was quite petite and was used primarily as a ‘travel’ guitar. Its neck left something to be desired. Although it was reinforced, it was not adjustable and never really played very well. The end of the fret-board hung over the body and had a tendency to lift. I removed the last fret marker and screwed the end of the fret board down a bit, allowing it to be playable. I ultimately threw it out after numerous routings and other butchery had made it un-restorable. In the current market one in very good condition sells for about a grand. I still have one of the knobs.

Here’s a really nice YouTube video of the deluxe version from the great web site Drowning in Guitars:

Some of them have potential. My first guitar, a $30 Silvertone acoustic, lasted about 2 years. I went to tune it up to standard tuning and the bridge popped off. It wasn't worth fixing.