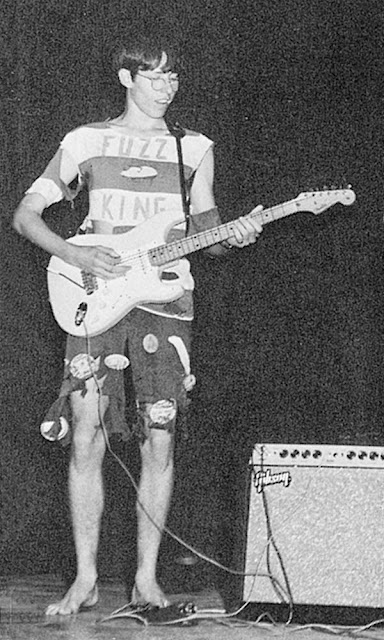 The Strat in question was “shell pink” in color (a girl guitar!) with mismatched strings—the A string was wrapped in black plastic. I don't remember it as being special in any way, it probably needed a proper set-up.

Having had sold my Les Paul Special a few months prior, I needed a guitar to perform with a country/jug band, The Hungry Freaks. We performed a down-home version of Hank William’s Setting the Woods on Fire for our high school homecoming. It went over so well that we found ourselves playing for a dance and a talent auditorium.

At the time I was known as “Fuzz King”, note the Maestro FZ-1a effect pedal in front of the Gibson GA-95 RVT Apollo amplifier (both borrowed as well.) There were two microphones plugged into the first channel—the amp was also used as a PA! No recordings exist of this group, which may be a good thing.

Here’s a video of a much better Strat player: