All the lonely people, where do they all belong? 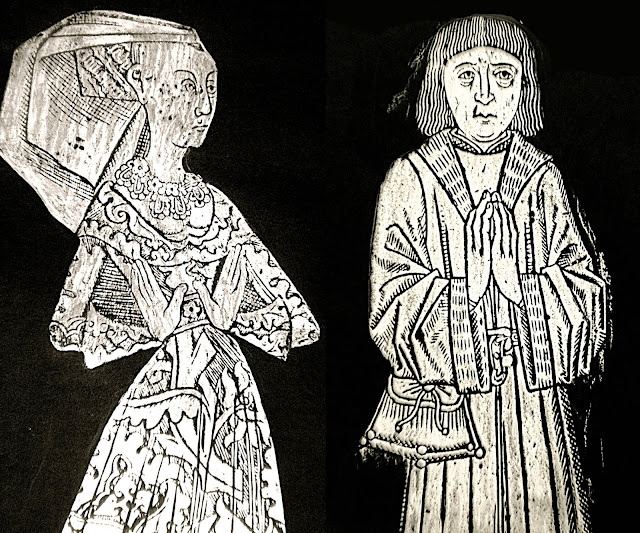 The garage sale wasn't promising, with couple of tables of miscellany out front (fortunately there were no kids clothes) and a smattering of things inside. On a workbench in the back of the garage I found a box with some odd photographic gear—little stuff: filters, flash units, various brackets purpose unknown, dozens of slide tray boxes. I asked the woman who was running the sale if there was any more photographic gear and she said no, but did mention that her sister liked to “fool around with cameras.” I assumed that the sister had died or was  someway incapacitated.

Behind the box were couple of shipping tubes that bore customs labels marked “Brass Rubbings.”  I peeked inside one—it was full of black paper in a roll. Unrolling it I came face to face with the visage of a stern looking 15th century woman looking back at me. After buying both tubes (and the filters) I brought them home and took them out of the tubes. There were dozens of rubbings taken from British churches. The address label was from a Dr. Chris Hill, Paleobotany, The British Museum, July 1977. A little internet research confirmed Dr. Hill was the real deal, Ms. Susan D—, the recipient, was 80+ and lived in my town, but I could find no other information.  The rubbings were evidently a hobby, I read that they were a craze in England in the 70s before many churches stopped the practice due to damage to the brasses.

To be honest, the rubbings strike me as somewhat creepy—lonely figures for a lonely person.

And now I am their caretaker.

I have a feeling they might resurface here someday.