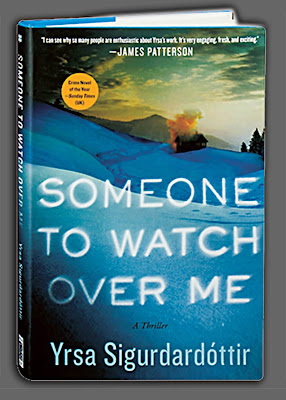 Someone to Watch Over Me
A Thriller
By Yrsa Sigurðardóttir
Minotaur Books, 2013

I have long had a nagging suspicion that I had missed one of Yrsa’s Icelandic “thrillers.” Recently I saw this book in the library, confirming my suspicion, of course I just had to take it home and read it.

This is one of the “Thora” mysteries, the protagonist is a lawyer who is contacted concerning an incident that happen a few years prior: a group home for for disabled people had been torched, killing several of its inhabitants as well as the night watchman. Jakob, the only survivor, is a young man with Down’s syndrome and had been convicted of setting the blaze and was incarcerated. While in psychiatric prison he meets Jósteinn, a sexual predator. Jósteinn has an trust fund so is able to hire Thora to prove Jakob’s innocence. Thora has her doubts about Jósteinn’s motives but takes the case anyway and soon discovers irregularities in Jakob’s trial.

There are several parallel threads: a hit-and-run accident that killed a babysitter whose death haunts the woman who hired her, a floundering radio talk show host who receives cryptic calls, and a sleazy lawyer who represented both Jakob and Jósteinn. As the story unfolds, Thora uncovers information about the group home residents and their families that leads to a surprising finish. All of this is played out over a background of the fallout from of Iceland’s 2008 economic collapse (the story takes place in 2010) giving an addition dimension to the story.

This is one of the better Yrsa books. It is a bit messy (don’t look too closely at the plot) and the writing certainly isn’t what one might call terse, but it moves along and I was able to follow the large cast of characters fairly well. This is by far the most “Icelandic”of her books, both in setting and culture.

I liked it, too. I really enjoy the characters in the Thora stories for their realistic quirkiness.