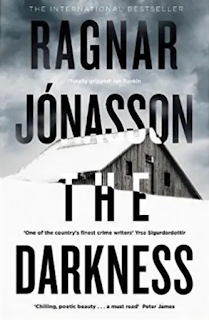 A Thriller
By Ragnar Jónasson
Translated from the Icelandic by Victoria Cribb
Minotaur Books, 2018

Ragnar is one of the “new generation” of Icelandic mystery writers. I’ve read and reviewed a couple of his books before passing on his third book, which I tried to read but couldn’t finish. This book, his fourth, is part of a new series featuring Hulda Hermannsdóttir, a police investigator working out of Reykjavík. Hulga is nearing retirement and is given the opportunity to work on one more cold-case before she leaves the force. She picks up on the case of a Russian woman who was found dead on the southern coast of Iceland that had never been given a proper investigation. Initially ruled a suicide, Hulga quickly discovers irregularities in the case and begins to ruffle feathers as she proceeds in her inquiries.

This is a much better book than Ragnar’s previous ones. The coherent plot, lots of local color, good usage of foreshadowing and a doozy of an ending make this a novel worth seeking out. Victoria Cribb’s translation is also better than the previous ones by Quentin Bates, which might have also contributed to its readability.

I enjoyed his other books, but this sounds very good. I just ordered it from our regional library system.

This is less “Agatha Christie” than the earlier ones. Ragnar does a really good job with his handling of parallel timelines too.

Oh, I liked Snowblind. Just put this on hold at our library.

I think the new translator makes a real difference here.

Thanks for the tip - finished the book in a day, could not put it down.

Glad you liked it.

There is still some life left in the Nordic mystery genre.