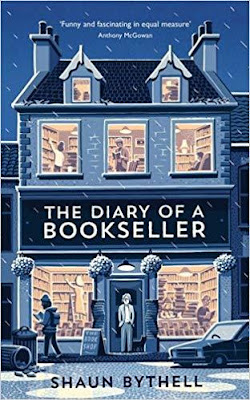 The Diary of a Bookseller
by Shaun Bythell
Profile Books, 2017

It has been a chore at times.

The Weaver suggested this book as a break from my self-imposed exile in the wilds of SERIOUS MODERN LITERATURE.

What a joyous discovery!

In 2001 a thirty-year-old Shaun Bythell wandered into a bookstore in a small town in Scotland and struck up a conversation with its owner. The owner persuaded Shaun (who had no prior experience in book-selling) to buy the shop. This book is a diary of a year of buying and selling books, as well as the trials of dealing with a menagerie of misfit employees and bizarre customers and trying to stay afloat amidst the tidal wave of Amazon’s ruthless merchandising practices.

Shaun is a bit of misanthrope, although at times glimmers of affection do break through his crusty Scottish reserve. His tales of each day’s events is often hilarious, and sure to bring smiles of recognition to anyone who has done retail sales. As the title of this post indicates, I did laugh out loud, and many times. An additional plus is that Shaun has a YouTube channel where you can see him, as well as his nemesis/amanuensis Nicky, in their native habitat.