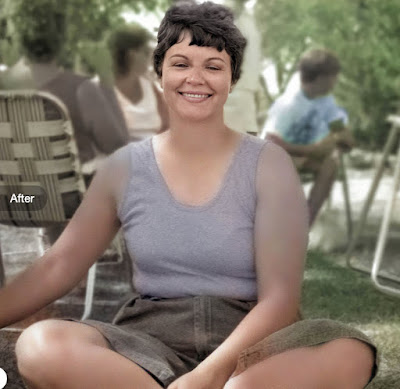 I was in seventh grade.

Deborah had beautiful skin and bad eyes. For some strange reason (unknown to me then), I thought that if I would walk home with her and carry her books (corny, but true!) she would be my girlfriend, and someday, perhaps, she would even kiss me. I was a skinny little greaser (this was pre-Beatles- when a little dab of Brylcreem would do ya) and growing out of my clothes about every three weeks. She was kind enough to indulge me, and we’d sit on her back porch and talk—until her mother would arrive home from work, and then I had to go. After a couple of months of this (and it was getting too cold to sit outside) I suggested that we could go to a movie together. She had to ask her mother.

Her mother said yes. She lived about a half a mile from the cinema, so transportation was not a problem. The Great Escape, a Steve McQueen action thriller, was playing. War movies were evidently OK, but Doris Day-Rock Hudson sex farces were not. We settled into our seats with popcorn, candy and a “Bubble-Up” soft drink between us (two straws, natch), and began to watch. There was one little problem. The movie was too good! We were both mesmerized; she was an only child from a very conservative family and I don’t think she had ever seen anything quite like it. We held hands, and she gripped mine tightly when Steve McQueen jumped the barbed wire fences on his stolen motorcycle. I don’t remember what happened after the date but I would have remembered it if we had kissed.

Soon after that, Deborah told me her mother didn’t think we should see each other so much. I got the hint. Years later, in high school, when she asked me to the Sadie Hawkins (girl-asks-boy) dance I said no, and she cried. There were a lot of things that I didn’t understand then.

I did see her at one of our class reunions, 20 years later. Still the same beautiful skin, although she now had contacts for her eyes. We were with our families (another mind blower) but we did get a chance to talk: nothing big, no hard feelings either way. Later, when we were all leaving the park, I saw her verbally chastising her husband, it looked like a routine. There but for the grace of God go I, etc.,

No kiss then, either.

UPDATE: I had seen her a couple of years ago at our fiftieth reunion, at first I didn’t recognize her, she had been ill. Last Friday I received an email saying that she had passed away.

Young love, unrequited love, as pure as it gets.

And I made her cry.

I would bet we all have a few stories like that. Some sad and some not so much, but the memories often flood back in. A couple of them hit me hard, especially if they ended in death. I guess we are at that age now.