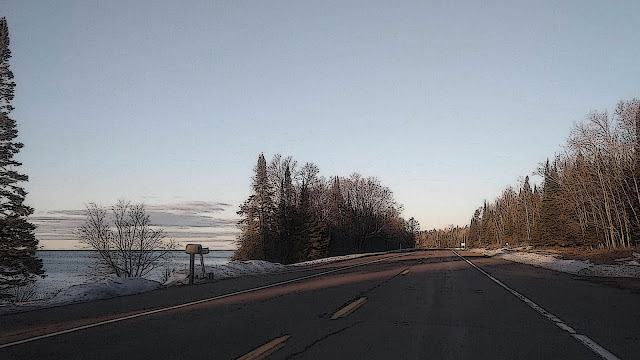 As the Great White North turns into the brown and white north with the advent of spring we find ourselves staying indoors a bit more than we wish. While the daily temperatures creep above freezing and we are expecting between half an inch of rain or six inches of snow which would normally get us all out to complain to each other about the weather we are pursuing a different course. The Covid-19 virus seems to have us all in adaptation mode. People are out walking even more than usual as we are not used to confinement and, after being indoors for much of the winter, we want out! The good thing is that in a small town where most of the streets are paved we are surrounded by Superior National Forest on land and Lake Superior for those who prefer water.

This is a tourist based economic area and now we would be going into our shoulder season where we wouldn’t be expecting a lot of visitors until about the time of the Fishing Opener which is often considered a high holiday in these parts. That is the 9th of May this year. Things really get rolling about June, though, as kids get out of school for the year. This year is different. The little buggers are home now for their spring break, but they started couple of days early and will not be going back this year by the looks of it. The teachers are working on lesson plans for the kids to do at home in order to make headway in achieving the knowledge they are expected to have by the end of the school year.

The biggest down side is that many folks are without an income at the moment. Thank goodness for unemployment insurance, but many up here are small and/or independent businesses who only get paid when they work and aren’t covered. Many people are about one paycheck from financial disaster. In this county we are at least 25% aged 65 and older and many of us in that age group still work. Fortunately for me, I am in an “essential” business so I still can. It is normally a quiet time of year for us in the building supply business, but things are still going on. We are small businesses (only 7 where I work) and many of our builders work alone or with one or two other people. It is easy to keep our distance from each other. For introverts like me this isn’t too much of a lifestyle change. I think what gets to people is the uncertainty. If this goes on for more than a couple of months it could get really painful.

One of the bright spots in this for our little community is that we seem to have more people that want to do something to help out their fellow residents. The grocery stores have needed help in order to get food out to all their customers, but also need to stay safe and keep personnel safe in what is now referred to as “social distancing.” Volunteers are pushing shopping carts around in the stores gathering orders that have been phoned or emailed into the stores and greeters are outside dropping off grocery bags to the waiting vehicles (or bikes or pedestrians) when they arrive to pick up their food. Amazingly, the system is starting to smooth out and folks seem to be getting the hang of it. I have even started volunteering a couple of times a week to grocery shop for people. From what I see on the signup sheets there are enough folks to do what needs to be done.

While there is very little vehicular traffic rolling around and the town has its moments of apparent desertion, you can detect the energy of things going on in homes and between friends and neighbors. Gasoline is down to $1.99 per gallon, but no one is buying it as there is nowhere to go. I was going to take a few days and go south to visit some friends, but will put that off until I know everyone is safe and healthy and this plague has gone by. They have closed the Canadian border so there is much less traffic crossing that. Just commercial traffic seems to still be moving to and from our northern neighbors.

In Iceland they have a phrase that is used often enough to be considered a national motto of sorts. “Þetta reddast”. It means something to the effect of it’ll all work out okay. In time everything seems to do just that.


“Jono” is a resident of Grand Marais, Minnesota (and a long-time follower of FITK); I have met him on a couple of occasions. I asked him to write to me, telling of the situation there. Grand Marais, at the beginning of the Gunflint Trail, is almost like a home-away-from-home for me—our family has been using it as a base of operations for summer excursions ever since the kids were little. We have rented a place near there for a weekend in July, but it is too soon to know how that will play out.

Hoping I see you in July.

Even if from a distance of 6 feet?

If that's what it takes.