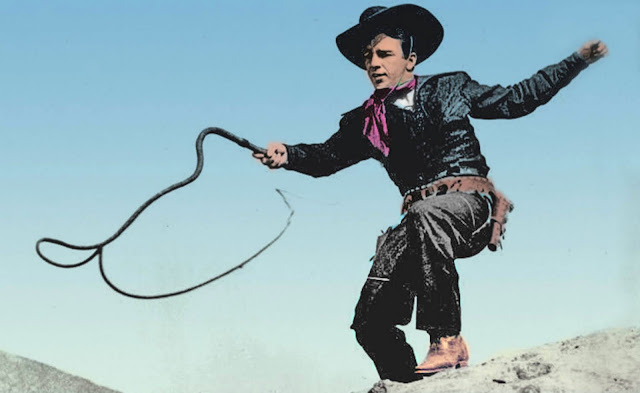 It is hard now to imagine how pervasive ‘Westerns’ were in the 20th century.

The books, films, music and television shows set in the American West of the 1800s captured the imagination of generations. What began as escapist literature in the 1880s remained popular, even with major authors such as Charles Portis, Larry McMurtry and Cormac McCarthy contributing to the genre. The idealized American West was always a bit of a con; performers like Buffalo Bill Cody and his traveling troupe brought it to the masses, both in the U.S. and overseas. When movies arrived Westerns became even bigger. Beginning with the first silents and throughout the sound era there were critically acclaimed western dramas as well as hundreds of cheaply made ‘oaters’. When television became big in the fifties Westerns were its staple fare. They reached a peak in the early-to-mid 1960s but, by the end of that decade, they had fizzled out. Only Gunsmoke soldiered on—still popular with the older viewers—until 1975. It had outlasted 30 other TV western series. The Beatles replaced cowboys as cultural heroes for the younger generation, and outer space became the new frontier.

One of the lesser lights of the cowboy cultural constellation was Alfred Larue, a bull-whip wielding hombre who got his start in ‘horse operas’ of the 1930s and, by the late 1940s, was the lead in numerous b-movies. First as Cheyenne Davis and then, simply, as Lash Larue. He was even the ‘star’ of a very successful comic book line that sold millions of copies between 1949 and 1961.

By the late 1950s Lash’s star had dimmed somewhat. He still got supporting roles in television shows but had to supplement his income working fairs and rodeos. I saw him at the Minnesota State Fair sometime around 1960. He didn’t perform on a big stage—he did his act on the bare ground in a fenced-off area of the Midway. Although that might seem a big come-down, his performance still triggered a childlike sense of awe in me. Lash had some hard times later in life but he did manage to straighten himself out.

He was the real deal as were his whip tricks. A major inspiration for the Indiana Jones character,  he tutored Harrison Ford in whip-handling for that role.

He remained respected by his peers until his death in 1996.

Every once in a while I still need to see a western. A couple of weeks ago I succumbed to a classic "spaghetti" western, Once Upon a Time in the West. Maybe it was the recent death of Ennio Morricone that triggered my desire, but I was not disappointed. The story was still great as was the soundtrack.

The Coen Brothers obviously have some affection for the genre.