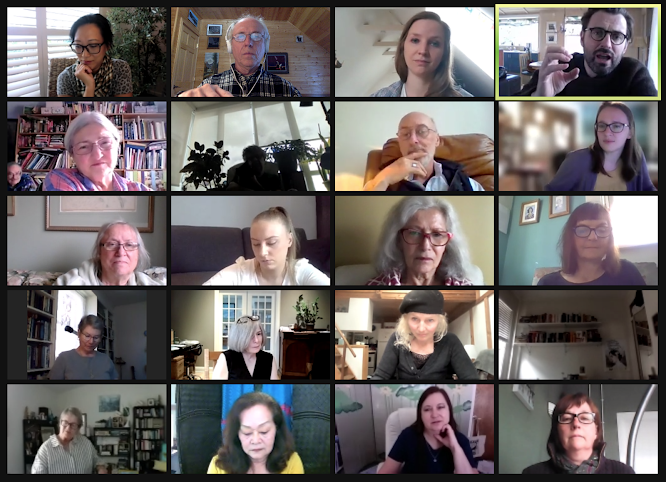 At long last the IWR happened, albeit virtually on Zoom.

Although the virtual format is almost the exact opposite of the “bodies in a room” experience that I signed up for (way back in 2019!) it was still something, and something about Iceland is usually better than nothing, right? My previous experiences with Zoom had been OK, if somewhat clumsy. This was on a different scale of magnitude, instead of a half-dozen former classmates I was one of a 150 or so fellow-seekers of literary enlightenment, interacting with numerous writers, poets and even an editor! Held over three seven-hour days, there were 27 presentations to peruse in real-time (and to review later at my leisure.)

Better than I had hoped.

The three Icelandic authors were the highlights of the retreat for me. Andri Snær Magnason (LoveStar) had a low-key, almost conversational presentation, as did Ragnar Helgi Ólafsson (in green box above). Hallgrimur Helgason (Hitman’s Guide to Housecleaning, Reyjkjavík 101) gave a wonderful history lesson on modern Icelandic writers, I could have listened to him speak for another ninety minutes. There were non-Icelandic notables as well, I was very impressed by Adam Gopnik’s talk on memoir and was pleasantly surprised by The New York Times Book Review editor Pamela Paul’s wide ranging discussion on how to write a book review. I saw the bulk of nine presentations and am looking forward to seeing most of the others when they are available on replay.

I did run across Emily Lethbridge who I “knew” from Laxness in Translation; we had an exchange of private messages. Other chat-room denizens were also entertaining and informative.

The technical side was handled very well except for a few participants whose equipment/connection wasn’t really up to snuff. I found that several participants hid in the shadows; a simple desk lamp would have turned their presence from distant to palpable.

As Björk once sang: Possibly Maybe…