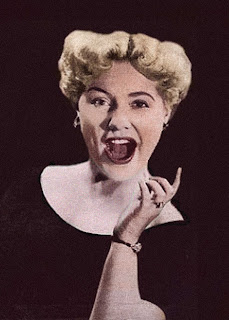 Gloria Wood is one of them.

She was a true voice artist, a singer with a four octave range and a talent for mimicry.

Gloria released a series of novelty recordings in the 1950s including Hey Bellboy! which was reportedly a big seller but somehow I had never heard it. Here it is, but with this caveat: it is an insidious ear-worm and has a chorus that is absolutely demented—ONCE HEARD IT CANNOT BE UNHEARD—you have been warned:

She was capable of straight renditions as well, as this track with the legendary Wingy Manone (from 1946) shows:

In the 1960s Gloria did a lot of overdubbing in the movies, including singing for Marilyn Monroe (River of No Return) and Vera-Ellen (White Christmas).