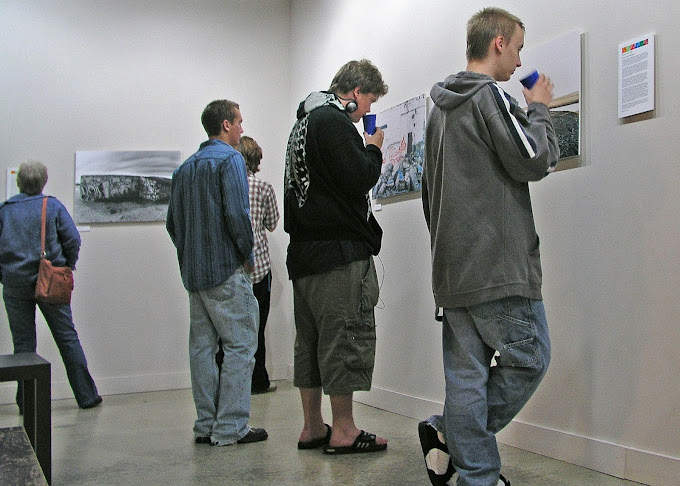 In October of 2005 I assembled an art exhibit at a local community college.

The photographs were taken on my 2004 visit to Iceland. Many of them have been featured here on FITK Mondays in Iceland posts and also used as illustrations for the serial novels and other posts. A thing that made this show different from most others was the inclusion of blog posts by “Audi” a young Icelandic woman. Her blog was titled A Woman Without a Man… and these “essays” covered a variety of her experiences and her reflections on issues that faced her and other modern women. The show was well-received but my pictures were definitely upstaged by Audi’s posts. Here is one of them, reproduced as close as I can make it in HTML:

23 years ago, minus about 29 hours, a young woman was giving birth right here in Reykjavík. She had been due a week before but the stubborn creature inside of her refused to come out. She was 24 herself and she already had a 8 year old son. The boy was a handful although he was an amusing child. He had been known to drop in for a cuppa with all the old ladies in the neighborhood to discuss the state of the world and told them stories of his father the rock star. His father was no rock star but he stuck by his story and made all the other little boys green of envy. The young woman had hoped that the new child would be a bit calmer but little did she know. Her life as she knew it ended that day.

The new baby, a big and strong girl, started her adventurous life with a bang when a nurse at the delivery room messed up a simple task of measuring the babies temperature resulting that the child was stuck at the hospital for 10 days. While growing up the girl managed to break all her fingers on the right hand in two incidents, fall a few meters down a stair and land on her eye, cut her leg pretty badly and get so many holes on her head that her dad had bought a first aid kit to keep at the house cause the medical bills were getting too high. Her great-grandmother taught her to read when she was five cause she had gotten sick and tired of reading out loud the subtitles to the Muppet show and soon after that the girl demanded that she would be taught to do simple math as well. The very patient great-grandmother did exactly that and by the time the girl started school she was way ahead of her peers.

The little girl soon developed a deep caring for others and her teachers told her parents one day that if there was someone left out at the class the little girl always made sure they were taken in to the group again. She was a friend to the little people and helped the ones who were slower at the books. Another thing that would be her trademark through out her life was clear at these early years. Out of all the children in her class she befriended a half Italian boy who had just moved back after living his whole life in Italy. This was the first foreigner in the little girl's life and surely not the last.

The little girl turned into a teenager and somehow lost her direction in life. She floated almost unseen through her teenage years and in the end she fled away from her island to look for herself. Her adventures were her way to flee the reality of her own life but she soon realized that she could run but she could not hide. At 22 she was faced with no secondary education, a job that sucked the life out of her and debts and shit up to her ears. Drowning in her own life she made a decision. She was not going to be one of those people who never live up to their potentials. She was going to be somebody, she just didn't know who yet. This morning for the first time in a long time she woke up smiling.