A three-fer today! A trio of films I’ve seen in the last two weeks each of which is set in France in the 1960s: 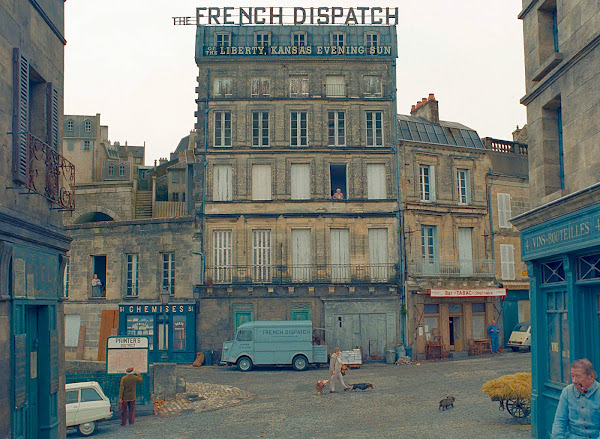 The French Dispatch
A film by Wes Anderson, 2021

I’ve never seen anything quite like it. There are three extended ‘magazine articles’ as well as bridging segments, all of which take place in France in the 1960s. Grounded by scenes in the office of The French Dispatch, a Sunday supplement of the fictional Liberty Kansas Evening Sun, it would be a sin to give spoilers to any of the stories. Part of the joy of the film is watching it for the first time with no preconceived notions. What I will tell you is that the production design, as is usual for a WA film, is completely over-the-top. My old blog-pal Annie Atkins did many of the text graphics: 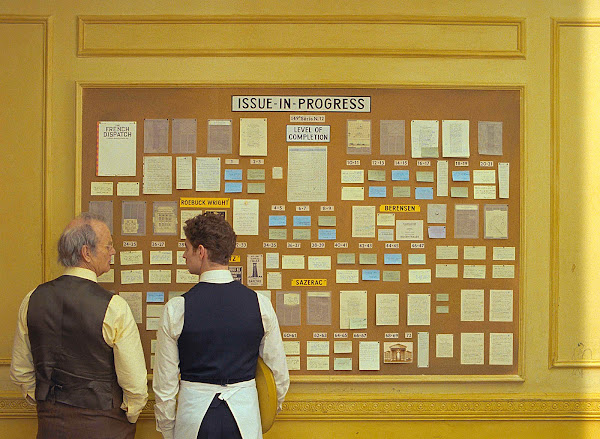 There is a full movie’s worth of characters in each segment, Tilda Swinton is most noteworthy as an art historian, but everyone is great.  I know I’ll be watching this film again and again: 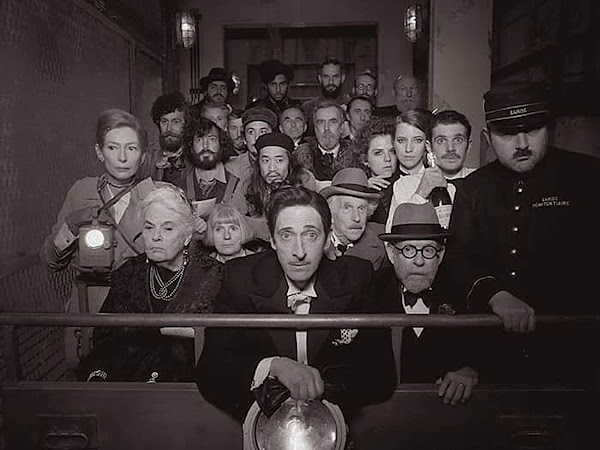 And now, my second ‘French Connection’:

The Umbrellas of Cherbourg
A film by Jacques Demy, 1964 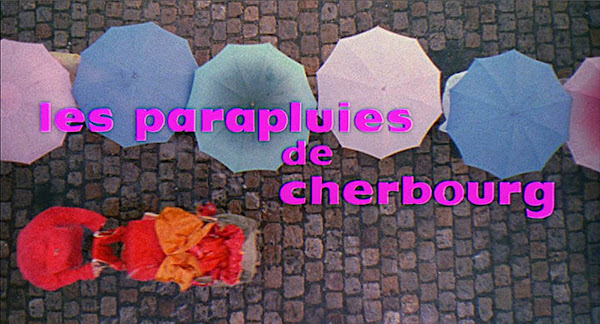 Another movie that has to be seen to be believed, also set in France in the 1960s, but this time in a real city. All of the dialog is sung to the classic score by Michel Legrand. It is the story of a star-crossed young lovers coping with the obstacles that life throws their way. If you are sentimental, make sure you have a box of tissues with you when you watch. I won’t spoil this one either; instead I’ll mention Demy’s outrageous and sure-handed use of set design. I’m sure that Wes Anderson has seen this movie many times as it explores color palettes that even Wes would be afraid to use. If that isn’t enough of a recommendation, it stars a young Catherine Denueve: 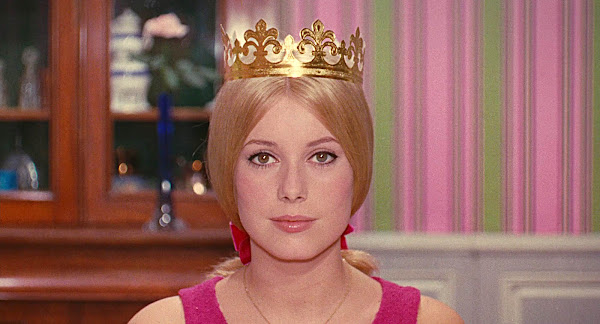 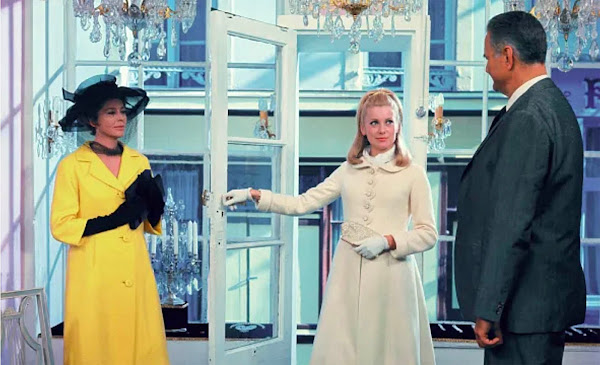 Although it may look as if it is a bit of cinematic fluff the film is actually quite serious, especially in its the conversations with Denueve’s character and her mother which are agonizing and realistic. This film certainly passes the Bechdel Test. 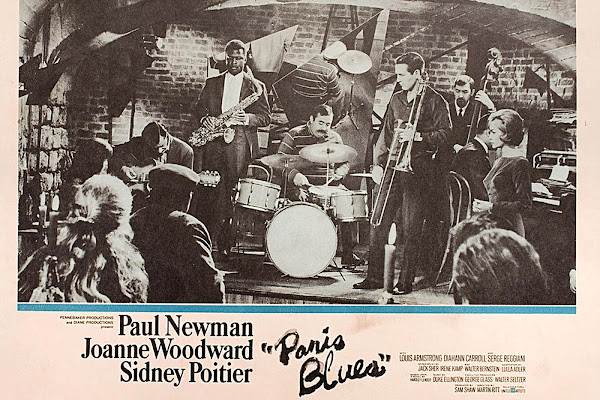 This is another film stuffed with style. The moody black and white location cinematography is augmented by a Duke Ellington score (and glorious cameos by Louis Armstrong). A pair of expat musicians (Sidney Poitier and Paul Newman) who play in a trés cool basement jazz club find their career paths derailed by the arrival of two American women (Diahann Carroll and Joanne Woodward): 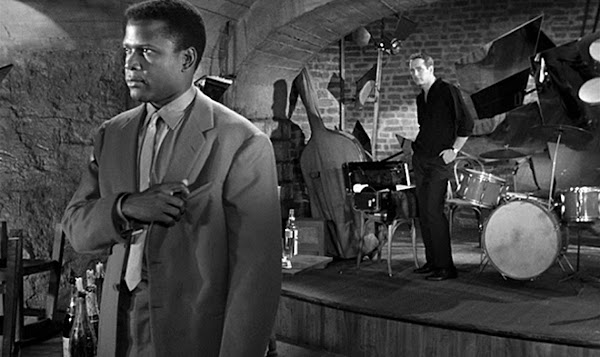 This would be standard Rom-Com fare except for the racial themes that form a subtext for the movie. Another twist is that Woodward’s character, who first appears as a Doris Day type, is actually a single mother of two and has no qualms about her sexual desires towards Newman. The four principals have an interlocked relationship, indeed, Poitier and Newman have sort of a man-love thing going while Carroll and Woodward have a genuine friendship: 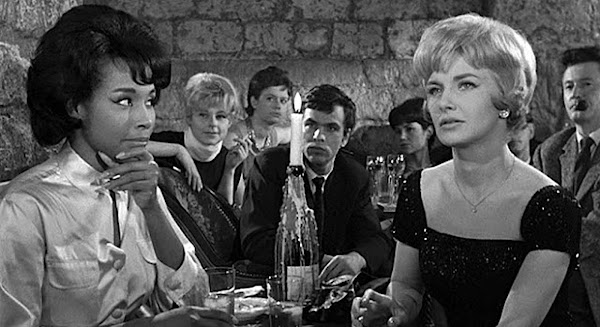 The big difference between Paris Blues and the other two is that it is not the product of a singular vision like Anderson’s or Demy’s. Instead it is a film-by-committee that took the source material (a 1957 book by Harold Flender) and watered it down; three screenwriters and a book adaptation were credited and the script was further tampered with by studio executives. Originally the two couples were to be mixed-race—still too controversial for American audiences—even if it was set in France. The dialog is also a bit disjointed at times; you would think that with all the writers it had it could sound more realistic. The sprinkling of 50s hipster patios coming from Newman is exceptionally awkward. The music, while well done, is in the style of the 1940s, creating an additional cultural dissonance. There is also reference to cocaine use by one of the band members but with symptoms more in line with heroin addiction. There is also a touch of homosexual jealousy between Newman’s character and a band-mate.

This film is a real curio and lesser than the sum of its parts. In some ways its realistic setting set against its dramatic content makes it more of a fantasy than the other two films!

I haven’t seen any of these movies, thanks for the recommendations.

Umbrellas is really quite charming, albeit bittersweet.