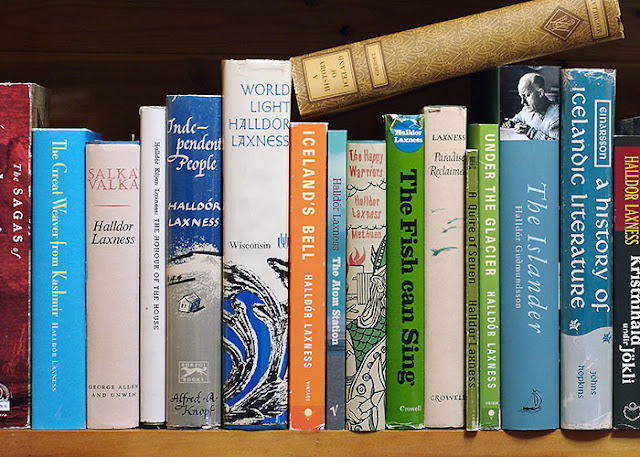 UPDATE:
There is now an entire web site devoted to LAXNESS IN TRANSLATION. Find this post and much, much more at that site.

The celebrated Icelandic author Halldór Laxness wrote many novels, essays, plays and stories in his long career. Those of us not empowered with a fluency in Icelandic are limited to a novella, a few short stories and this list. They are available although Salka Valka and The Happy Warriors are hard to find.

Translation is an art form in itself; I'll leave any judgment concerning the English versions of these books to experts. Icelandic is a very precise language (blessed with a vibrant set of idioms) and English has a lot of Icelandic "DNA" in its structure and vocabulary which should allow for a good conversion. Not being a native Icelander, I'm sure I've missed many cultural references in these books, conversely, reading Laxness has exposed me to many facets of Icelandic history, culture and psychology. I have read that Laxness has done more to shape the Icelandic sense of national identity than any other author has for any other culture.

This post is part of a challenge from Rose, who is also a big Laxness fan. With today being the 52nd anniversary of Laxness' Nobel banquet speech it only seemed fitting to present our views at this time. (note: this post has been updated several times since it was first published)

#10. The Great Weaver From Kashmir (Vefarinn mikli frá Kasmír) (1927)
... It was his first work to gain wide recognition- the story of a self-centered young man on his quest to become the "most perfect human." Full of long philosophical passages, although brilliant at times. A full review is here.

#9. Paradise Reclaimed (Paradísarheimt) (1960)
... The "Mormon" novel, parts of it take place in Utah (kind of dry-!), in it Laxness explores religious and social themes, particularly familial estrangement. Based on a true story. Many people like this one a great deal, naturally popular with the LDS. Here is another reader's perspective.

#8. Atom Station (Atómstöðin) (1948)
... Pointed political satire aimed at the Icelandic government's acquiescence to the establishment of the United States military base in Iceland in the late 40's, with a memorable heroine in Ugla, who is a country girl who sees through the duplicity of the politicians. Her character may have been loosely based on Sigríður Tómasdóttir, who reputedly saved the waterfall Gullfoss from exploitation in the early 1900's. It has probably not been distributed in the U.S. until recently because of sub-plots concerning Communism and Anarchism. Laxness was effectively blacklisted in the U.S. because of this book. Full review here.

#7. World Light (Heimsljós) (1937-40)
... A very strange novel, first published in four parts with almost the entire first part taking place with the hero in a sick-bed! Ólafur's struggle with religion, sexuality and morality may be a bit much for a modern reader, especially after several hundred pages of his confused thoughts and morally suspect deeds. The book examines the saint/scoundrel paradox of the Icelandic Skáld (poet/writer) with insight and contains a wealth of peculiar Icelandic phrases and observations- ending with a transcendent finale. Very highly thought of by Icelandic readers.

#6. Under The Glacier (Kristnihald undir Jökli) (1968)
... The "Modern" Laxness novel, complete with new-age charlatans, a most pragmatic Pastor, the woman/goddess/fish Úa, and the hapless seminarian "Embí" who is trying to make sense of it all. A novel of ideas, very funny, very droll, its subtle humor may take repeated readings to appreciate. Quite possibly the most "Flippist" novel ever written. Susan Sontag's last review was of this book. Halldór's last original novel, written when he was in his sixties, it was much discussed in Iceland after its publication. My review is here.

#5. The Happy Warriors (Gerpla) (1952)
... Presented in a strict saga style, set in the era of transition between Christianity and Paganism, concerning two would-be "Heroes" who are out of date with the times. Masterfully written, full of cultural and historical references; it might not be the best choice for the casual reader, however. A full review here.

#4. Iceland's Bell (Íslandsklukkan) (1943-45)
... Icelandic history in the guise of a sprawling romance-saga; the English version has numerous footnotes which help to explain the mixture of Icelandic, Latin and Danish references; it is not for the attention-deficient but worth the effort, if only for Snæfríður's impassioned speech before the Danish authorities which speaks for subjugated peoples everywhere. Check out this in-depth review, in two parts, for more on this magnificent book.

#3. Independent People, (Sjálfstætt fólk) (1934-5)
... Icelandic male psychology (and much more) While reading it I found myself thinking that Bjartur, the hero, was almost exactly the same as my grandfather (and I also found more of myself in Bjartur that I'd care to admit...) Widely available, I grew up with this book in our house- it was a Book-Of-The-Month-Club selection in the late 1940's. Along with Iceland's Bell and World Light, one of the main reasons Laxness won the Nobel prize in literature. The late poet Bill Holm had been known scour used bookstores for copies to give to friends! Amazon has over sixty 5 star reviews of this book.

#2. The Fish Can Sing, (Brekkukotsannáll) (1957)
... Probably the most delightful of Laxness' novels. The orphaned Álfgrímur is, for the most part, a happy and simple child living in a world of colorful Pickwickian-style eccentrics in the turn of the century Reykjavík. His coming of age, particularly in his relationship to the mysterious Garðar Hólm, may be a metaphor for Iceland, then reluctantly emerging into the modern world. In light of the recent Icelandic presence on the world's music scene, Álfgrímur's graveyard dialog with Garðar is eerily prophetic. This is another work where nearly every paragraph holds some brilliant observation or subtle characterization. I've written about it here before, with a full review here.

#1 Salka Valka (1931-32)
I have also featured this title here; this story started out as a screenplay and it has a definite cinematic quality- it has been filmed twice. As to the book itself, I have no praise that can surpass this article by an Icelandic writer.

For a good first novel, I would suggest Fish; if you like sprawling sagas, try Bell. If you can find it, Salka is absolutely tremendous- overwhelming at times- a real find of a book, it is scandalous that it remains almost unknown in this country. Laxness also published two earlier juvenile novels and some later memoir/novels which, to the best of my knowledge, are not available in English.

Good thing you warned 'em, Batty, the revolution is about to begin!
I loved your post! It is interesting to see how similar many of our ratings are--and we both slipped in an homage to Bill Holm as well. (I just received my copy of Windows of Brimnes; it should be easier for you to get your copy signed, hmmm.)I'm glad you brought up the points regarding cultural literacy, and the Icelandic language. We'll see which of us scores an affordable copy of Happy Warriors first--if I do I'll share. I haven't looked back at your review of Salka yet, as I don't want it to influence mine (next on my list). Thanks, PB, I enjoyed this.

... in yet another weird convergence, the esteemed Mr. Holm was in Fargo Saturday night- I didn't find out until the next day however, otherwise I would already have my autographed copy! I was really surprised to find that Sjón (Björk's frequent collaborator) placed Gerpla among his top eight books of all literature! I'm in the hunt for it! World Light was a tough one to place- it probably has the most vernacular of any book, but Ólafur's religious conflicts were almost the death of me! Under the Glacier is almost like riffing in Jazz- Kristín told me there was a movie made from it, that would be something to see!

Thanks for doing this thing, my only regret about it is that there aren't likely to be any more titles, unless I really do learn Icelandic...

Yes, but re-reading the ones I have will always be a pleasure.

I think Laxness's daughter made the film Under the Glacier - Guðný Halldórsdóttir. Apparently it was the only film made after a story of his that he was sufficiently pleased with.

I wish I'd seen this list before I chose my Laxness book for the Challenge.
My library doesn't have The Fish Can Sing, so I'm going with #3 on your list--Independent People.

Niranjana ~ what a book! Many people have said it has been a life-changer, many prominent authors have rated it as one of the best books in all literature. It can be difficult, but could that man write! My top five ranking is pretty arbitrary, if I read Independent People again I might put it at #1!

A life-changer! I'm really keen to begin the book.

I just finished the Osborne. It's a bit more basic than I'd bargained for, but it's done the trick--I now feel armed and ready :)

Niranjana ~ I'm very interested in what you think of it, I hope that you will publish a review someday.

Thank you so much for stopping by my blog and linking your list. I love it! I'm new to Laxness but after reading Independent People I know I'll have to look for more!

I just finished Under the Glacier. It was... indescribable. I think I need a drink (or two) before attempting a review.

The conversations were very Icelandic in their elliptical structure. Laxness was in his sixties when he wrote that book.