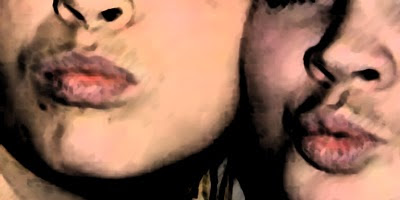 An odd word in an otherwise routine Scrabble game.

I challenged and lost, the Weaver couldn't help but gloat.

I must have done a moue myself when I said "You must have learned that in lipstick class!"

"Lipstick class! Hahahah! No such thing!"

I knew that there was all sorts of secret girl stuff, stuff boys are never aware of. In sixth grade I had to sit on the bench outside of the principal's office for some petit offense and as I sat, the sixth grade girls were watching a "sex-ed" film in the nearby auditorium. From the periodic shrieking of laughter of those girls, I knew then that there would always be a gulf between the genders- hundreds of great mysteries which I would never understand in a dozen lifetimes.

But now I know one of them.