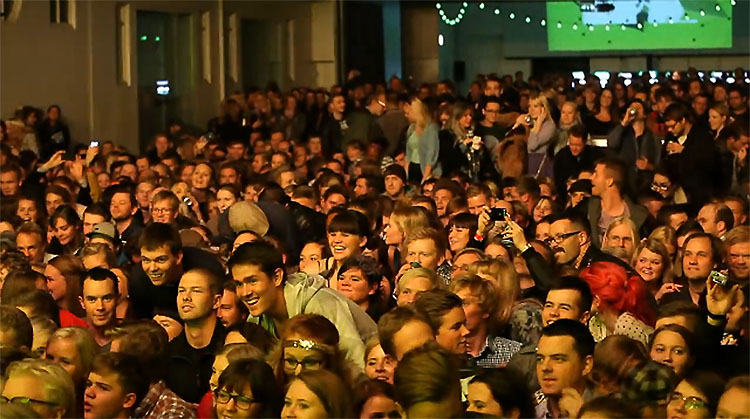 Numerous videos and films have covered Iceland Airwaves in the past, most notably the full-length Screaming Masterpiece (2005) which derived most of its footage from the festival. None of them have really given more than just fractured glimpses, and none have really captured the feeling of what is like to be part of the scene. There's a new promo video out, sponsored by Icelandair. It is really just a redone version of last year's but with some new scenes, interviews and a little tighter editing.

AIRWAVES- a Rockumentary by Gudjon and Bowen Staines gives a coherent look at what is essentially an unclassifiable event: over one hundred Icelandic acts, numerous international groups poised on the cusp of greatness, in an incomparable setting. Don't take my word for it. Watch the 40 minute video, in full-screen HD if you can, it really gives a sense of being there.

There are some problems the film only addressed obliquely, however. The festival may becoming a victim of its own success- more shows are being steered toward Harpa, a large complex of auditoria on the waterfront. It was built by somewhat dubious financing. Harpa is almost the antithesis of the festival's homegrown roots. Pushing the date into November may mean that those sunny scenes of frolics in the Blue Lagoon (shown in the video) are already a memory. Still, it is the spirit of the young (and young at heart) people of Iceland which is what The Airwaves Festival is all about.

For those who can't wait until November, Live in the Lobby is a weekly concert series held at the Downtown Hostel. Many thanks to Auður Ösp, from the I Heart Reykjavík web site for the tip. I've seen many clips from shows held there- it is a very intimate and inviting place. Be sure to check out Auður's site- it is full of ideas for fun in Reykjavík and the surrounding area (that's her in the screenshot above- right below the woman showing her teeth in the center of the picture.)

Considering going this year...agree with your points on Harpa and November! And I think I might feel very old. But, when else am I going to be able to see all these bands I like.

Well I was 56 and 59 when I went, I know a couple who went when they were in their 60's. I didn't do any crowd surfing, however. The off-venue and the smaller rooms have a wider mix of ages. The video kind of avoided showing the geezers.

I might be half of "the couple who...were in their 60's". In any case, it worked to our advantage because people were curious about us so they came up and talked to us or were very friendly when we spoke to them. Maybe they thought we were lost? Sure, the average attendee is a young attractive Icelander. But if you dig the music, you will fit right in.

Thanks both! Encouraging. I just won't look at any more pictures of rooms full of teenagers! Must say I'd be more interested in the smaller concerts anyway.