This is chapter 7 of Window Weather, a serial fiction novel on FITK 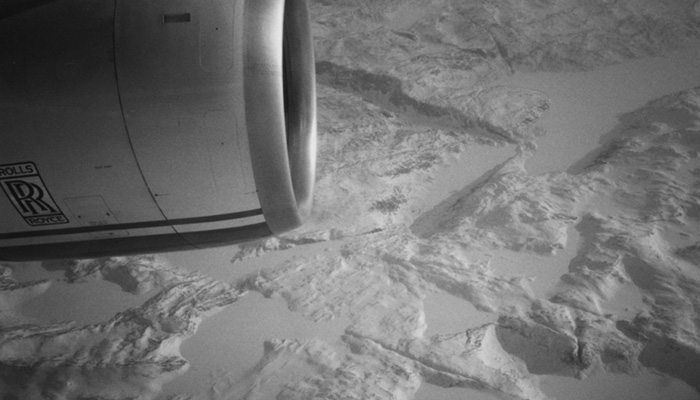 “Hi, my name is Sally O’Donnell, what’s yours?”

Sean’s trip had started off with a bang. The vivacious red-haired woman next to him was a talker—Sean’s plan of disappearing into the airplane’s upholstery was already doomed, he thought. Better to be cordial, yet non-committal, or, better yet, be absolutely boring.

“Sean? Sean from Seattle, huh? Ha! What brings you aboard this flight?”

“Well, I’m certain that you’ll find the scenery unique although I’ve never been a believer in luck.”

"Oh, I believe in luck alright. Some good, some bad. Lucky in love, I’m not. After my last husband referred to me as his ‘entropy wife’ I knew that the fire was out. Ha! How about you, I mean not like I’m hitting on you, ha, but are you attached?”

“Oh, that’s too bad… for you, I mean. Hah! An exotic locale. No one knows who you are? An agreeable woman. We could see the midnight sun, you and me—if you know what I mean. I’m kidding of course… or am I?"

“Wow,” thought Sean, “We hadn't even left the ground yet and I am already paired with a bona fide loony!”

“Really, Ms. O’ Donnell, I’m spoken for,” said Sean, as dispassionately as he could.

“Just breaking the ice. No harm, no foul—no need to be offended. Please, Sean, you call me Sally.”

Sean had really wanted to open his laptop and begin reading some of Billy’s old emails and blog contacts. As the plane was taking off, he thought it better that Sally knew as little as possible of him and his mission. “Remember—be boring,” he thought, “Or, perhaps, being corny would work better.”

“Sally, you are really something,” said Sean, “If I were free, I just might take you up on your offer. But, alas, my heart is betrothed to another, perhaps in another lifetime?”

“Aw, a real nice guy! I thought they were extinct. Oops, I think we just left the ground. I like this part of the flight, this and the landing. The rest is a drag.”

The jet began its climb and soon they were over the Cascades, heading away from the fading sunlight. It headed northeast toward Hudson’s Bay. From there it would fly over Greenland, finally landing in Keflavík. In less than seven hours Sean would be standing on the streets of Reykjavík.

“Sally, I’ve read that when traveling more than three time zones, you shouldn’t eat until you arrive. Doing that is supposed to help you avoid jet-lag.”

“Well that might be true for some but I'm starving,” said Sally, “And I could use a drink!”

“The drinks are on me—it isn’t every day I have such a boon companion.”

By the time the jet was over Greenland Sally was snoring.

Sean took out his laptop and opened one of the files that he had copied from Billy’s college computer:

My pals Emma and Helga and Kristín were hot on going to the Navy Base Club so I said I'd be the driver. I felt I owed them as much for what they've done for me but I regretted it the minute I said I would. I'd been to the club before, when I was drinking, and I wasn't impressed. So, I really wasn't looking forward to going when sober. Anyway, we drove down to the base where we signed a bunch of papers to get on the base and then a man made us sign again, just to let us into the club. I thought it was a lot of fuss just to be able to get into a dive joint but I wasn't going to bitch because it was the girls' night out.

First thing I notice when I get in the door is Billy, the hotshot who's says he is the son of a U.S. Senator, standing with all his friends at the bar and then he turned and noticed me and the girls. The guys were whispering to each other as we walked by and when we sat down on the other side of the room they were all staring with smirks on their faces. Obviously Billy thought I must be stalking him because I was in "his" club at the U.S. base. Cue "You're so Vain" on the soundtrack.

Every now and again Billy led his friends on a tour to our table until they all knew exactly who the crazy stalker girl was. I had only seen him twice: once last weekend at Gaukurínn where we talked for a only little while, and then again when I ran into him on Laugi Thursday- when he asked me for my number. Of course he didn't call. What is with these Americans? I don't care if his father is the Pope of Rome, at least he could call me. Once. One of his friends tried to show an interest in me at the club but I just ignored him rather than fall for that kind of pick-up routine. Not that his friend was too ugly but I thought that any friend of Billy who would try such a trick must be somehow deranged.

Because all of that action wasn't quite enough fun for one night we then went to a strip club. When the bar lady found out I wasn't drinking she was nice enough to give me a glass of coke. While we were there all the usual stuff happened: some sketchy old lady asked me if I wanted a private show, then a drunken guy wanted us to hit on his married co-worker. The strippers walked around patting the Navy guys on the ass (to see how much money they had!) then after a while Billy and his friends came in so we gave up and went home. Both girls passed out in the car. So it was just me, with Emma drooling on my lap, who was awake to greet the sun coming up over highway 41.

I think it might be a while until I go sober to a club again. It's just too depressing. What's up with Billy by the way, does he honestly think I'm just desperately in love with him and that I intentionally hunt him down? It's a small island. I can't help it if I keep running into him.


“So, that was what he was up to that summer,” thought Sean. He had wondered where Billy would disappear to for weeks at a time. Billy’s game was always the same, with only the playing field changing. He would fly in, pick his next conquest, alternately ignore or pay casual attention to her, and then turn on the heat as he went for the kill. From the young woman’s conflicted blog post it was evident to Sean that Billy’s sleazy charm had worked as well in Iceland as it had in the States. He must have had some success with her if he kept this post. Sean was going to read more of her blog, although he thought that she wouldn’t have felt like writing about him after she had been dumped. Sean considered another possibility. Billy might have had a change of heart;  the reason he had gone back to Iceland was that he had really fallen for someone this time. Not very likely. Billy probably had had at least a half-dozen other conquests. Sean made a mental note to have someone back at intelligence in Seattle see if they could find this “Silu.” She might be the key to Billy’s whereabouts.

Sally had stopped snoring and began to stir so Sean shut down his laptop and looked out the window. There were traces of northern lights dancing in the distance. “No midnight sun this early in the year,” he thought.