This is chapter 11 of Window Weather, a serial fiction novel on FITK 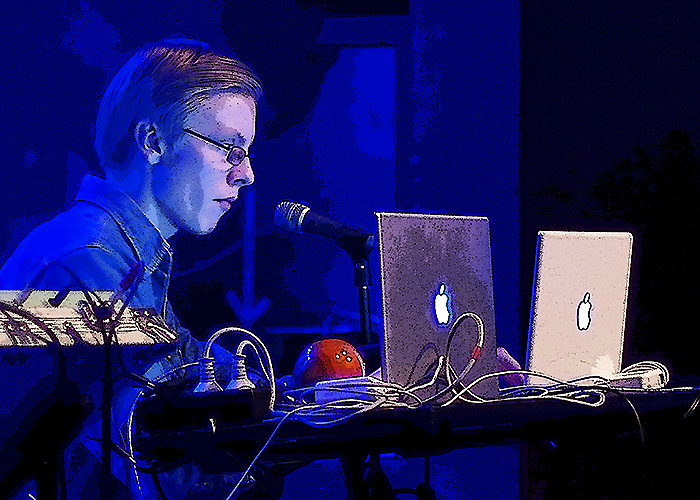 Inside, the club was larger than it appeared on the outside, with mirrored columns and an arched roof that gave it a cavernous appearance. The pulsing bass beat was evidently originating from a young man who was standing on the stage, gazing intently at a pair of laptop computers. From time to time, he would interact with this gear; Sean hoped that he was actually doing something and not just playing a recording. The music was loud and boring. Except for the brilliantly lit stage, the room was quite dark. Sean couldn’t really see much from where he was standing at the back of the room. He slowly made his way around the side of the hall toward the front where he thought he might have a better view.

By finding a seat in a corner, Sean was able to scan the whole crowd. It was undulating in synchronization with the heavy techno beats. As he scanned the faces of the dancers he sensed that someone was looking him over as well. Sean couldn’t see Billy but when he looked across the room his eyes met the gaze of a pair of tough-looking men, men who were in the process of making their way through the crowd to where he was standing. They weren’t dancing. Sean’s danger sense began going ballistic and he headed for the door. The men changed their trajectory. Sean began to move faster and by the time he reached the lobby he was almost running.

Once outside, Sean went around the corner to a side street. Just when he thought he had lost his pursuers, he was stunned to find them standing in the alley directly ahead of him: the venue had a rear exit. Sizing up the situation, Sean knew that each man was bigger than him and certainly much stronger. He turned around and began running back toward the square. There was a big hotel on its far side, Sean felt that if he could make it there he would have a chance. As he neared the Hotel’s entrance, he bumped into a woman who was leaving.

It was Sally, the wild woman from the plane. Of course it was—they were in front of The Hotel Borg, where Sally had told him that she would be staying. The thugs continued walking toward Sean.

“Sally! Am I glad to see you!” He took her arm as nonchalantly as he could then whispered in her ear “I seem to have attracted the attention of some undesirables back at the club. Would you be so kind as to offer me sanctuary until they lose interest?”

“But of course,” she said as they were buzzed into the lobby, “You do realize that now you are in my clutches, don’t you?” Sally said, smiling like the Cheshire Cat. The desk clerk, a young woman who had been reading an e-book, nodded to Sally as they entered the elevator.

“You’re in the spider’s web now, fly-boy,” Sally said. Her smile was tighter now. The look in her eye was strangely piercing. Sean was still holding her arm. Sally took it as an invitation to move closer. Her scent was expensive and was complimented by a top note of fruity wine. Sean thought that she was probably quite drunk. The couple got off on the fourth floor and walked down the hall to Sally’s room.

“Well,” said Sean, after they were in,  “I’m impressed by your taste.”

Sally’s room had been exquisitely decorated with original art and expensive furnishings. Sean’s apartment seemed shabby in comparison. The windows in Sally’s room faced the square where Sean could see his adversaries loitering. One was talking on a cell phone.

“Let me take your jacket, Sean. Sit down, oh! Take off that silly sweater, too, don’t worry, I won’t molest you… much. Hah! Excuse me a moment,” Sally said as she went into the bathroom. Sean reasoned that if he had to choose between Sally’s charms and a beating by a couple of goons, he’d take my chances with her. He thought it unlikely that she’d actually hurt him, but he could clearly see that she was ready to wrestle.

Next Chapter: A Room With A View