This is chapter 20 of Window Weather, a serial fiction novel on FITK 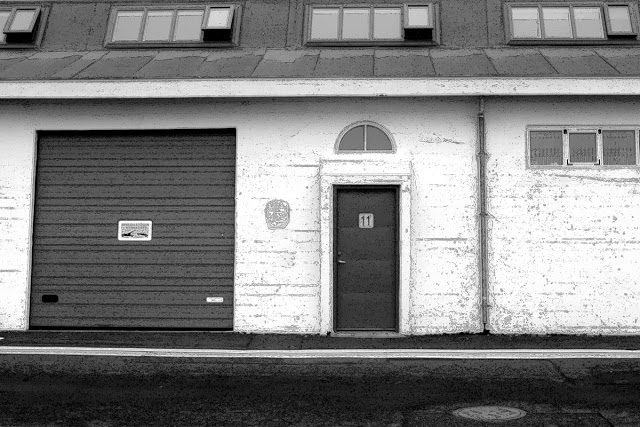 It was still dark when Sean made his way back down to the harbor. A faint glow had already appeared in the eastern sky and the city was beginning to come alive. He hadn’t slept for nearly twenty hours and the Ambassador’s spiked coffee made him feel as if he could stay awake for another twenty.  Billy’s ‘crash pad’ was located in a long warehouse building which had been divided into separate spaces. Sean quickly found #11.  It was evidently a storeroom, Sean guessed that its owner probably of one of Billy’s Icelandic contacts. About the size of a double garage, it contained a variety of gear: a boat trailer, oars, outboard motors, boxes of various sorts and a pile of tarps that appeared to have been used as a crude bed. In the back of the room on a wide board straddling two plastic bins was a MacBook as well as an iPhone sitting in its charging station. Sean assumed these were Billy’s. The laptop was dark. In college, Billy had used a simple password to lock his computer. Sean when he touched the space bar the screen lit on the login page. Sean entered Billy’s old password and he was in.

The screen saver was a picture of a child. Sean recognized her as the girl who sang at Perlan. She was covered with icons: some were familiar, others obscure, there were even some with Cyrillic script. The one which caught Sean’s eye was a simple folder labeled ‘Evidence’.  When he opened it a subfolder titled Senator Clarkson came up, Sean clicked again and a list of contents filled the screen. There were numerous topics: Iranian Nuclear Materials, Kickbacks on Mideast Oil Supplies, Russian Weapon Sales, Mistresses Past and Present, ‘Accidental’ Deaths, Sean Carroll...

“So, this is it,” thought Sean. He had found the big project which Billy had been working on. A quick glance at some of the entries confirmed that it contained political dynamite. And it was high grade, professional intelligence—Billy still had his knack for digging up dirt, but it was obvious he was playing in a different league. Seeing his own name on the list, it gradually dawned on Sean that obtaining this ‘evidence’ was the real reason he had been sent here—not to persuade Billy to campaign for his father. Getting these reports and seeing what was in them would help the Senator’s people ‘neutralize’ Billy. Just knowing the existence of these files was a death warrant for Sean—if he didn’t go along with the Ambassador’s plan. It might be one even if he did. One ‘Sean Carroll’ had already ‘died’, and Sean figured that a second death wasn’t out of the question.

Sean wondered why Billy had taken his laptop when he already had this setup? Sean had a thought of sending all this information back to Mrs. Robinson in Seattle but he didn’t want to risk doing it on Billy’s laptop. The same reason Billy didn’t want his computer to be tracked uploading this dangerous information. Billy had been in the habit of roaming the city with his phone—hopping from one WiFi hotspot to another in an effort to make it impossible for anyone to track him.  Sean thought it likely that Billy might have wanted to use Sean’s laptop to upload his ‘evidence’, keeping his computer from being tracked.

The chime from Billy’s phone jolted Sean back to reality. It was a text from Þora, the sister of Silu. The woman the bartender at Karamba had warned Sean about.

If Sean was going to be Billy from now on, this was the time to start.  He texted back:

strung out, but OK.

Her answer arrived in a couple of seconds:

Now I was really fucked. Icelandic? From the context of the situation, Sean figured she must have been asking where he was. He replied:

She had her own name for it:

Sean looked around to assess the state of Billy’s ‘bachelor pad.’ The piles of gear and tangled fishnets were a hopeless mess. There was a wool blanket on top of the tarps. “Billy's duvet”, Sean thought, “At least it’s clean.” The boxes contained motor oil, engine parts, nets and other fishing gear—all of it covered in grime. Sean saw nothing else that might have belonged to Billy excepting the phone and computer. After looking the room over again, Sean came to the conclusion that either Billy had been taking an extremely minimalist approach to life or that he must have stored the rest of his belongings elsewhere.  Since there was no point in cleaning up, he took another look at the contents of Billy’s computer. With the exception of the ‘Evidence’ file, every other icon on its desktop led to a locked log-in screen. A tapping at the door interrupted Sean’s searches.

Any questions he may have held about the nature of Billy’s relationship with Þora were eliminated when he opened the warehouse door. Þora rushed into his arms and kissed him passionately, shutting the door behind her with her foot. Sean knew exactly what Billy would have done in that situation; he’d seen him in action many times:

“Hold the kiss,” thought Sean, “Left hand cradling her right shoulder, a gentle touch of the right hand on her lower back, move it lower, then land with a gentle pat just behind her hip.”

“Billy, you’re safe! I heard there was an accident last night and an American who looked like you was killed. When you didn’t pick up before I thought it was you,” said Þora, “God, you look terrible. Where have you been?" She was tall, almost Sean’s height, with dark brown hair styled in a Louise Brooks-style bob. Her body language was making an unmistakable demand. ‘No’ was an unacceptable response. Sean began lying:

“I was out. Walking. Thinking. Hiding from the rain,” said Sean.

Þora looked concerned: “What were you thinking about?”

“Þora, I’ve been thinking it over. I think that it’s time that I went back to the States.”

“Oh,” she said, “What about me, Billy? What about your daughter? What could be more important than that?” Þora was still holding Sean tightly, seductively moving her hips and breasts. When Sean felt his body responding in kind, he could see that the situation was rapidly becoming out of control. What was worse was the fact that Sean liked it.

“You could live with me, then Silu would let you see her daughter,” continued Þora,  “You could be close to her, you’d be like a favorite uncle.”

“Silu will never allow me to be close,” said Sean, That’s one reason why I have to go back, I can’t live like this anymore.”

“The lies are coming faster now,” he thought, but Þora was smiling now. When she relaxed her embrace Sean thought she would move away. Instead of stepping back, however, she pushed him down onto the blanket and the pile of tarps.

“You can live like this, Billy,” she said, pulling down the leggings she was wearing under her skirt, “And I will make you like it.”