Our Own Private Idaho

This is chapter 8 of The Matriarchy, a serial fiction novel on FITK 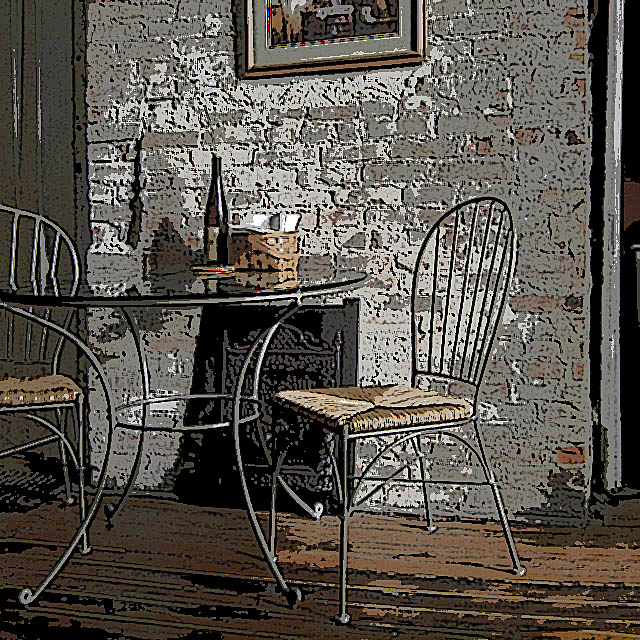 “That’s an eighties group, isn’t it? Who are they?”

“Could you turn it off, please.”

Sean and Mary were traveling through southeastern Washington State. During the drive, Mary had complained about carsickness. The cheesy pop music wasn’t helping things any. They had spent the morning in Seattle getting ready for the trip to Sean’s Aunt Tina, in Iowa: packing, paying bills, stopping mail, getting cash. Lots of cash. Their destination for the night was a picturesque Bed and Breakfast in southern Idaho.

They had taken the precaution of starting the trip by going west on the Edmonds-Kingston ferry, then driving south, down the Olympic peninsula, to connect with Highway 16 going east. Miles of empty two-lane had eased Mary’s concern about being followed. Only their lawyers knew that they had left Seattle; Mary told them that they would be ‘camping.’ They had taken along one of ADR’s ‘Roswell Phones’, phones that had been set-up to make any calls made on them to appear to be originating from New Mexico. Mary could monitor any follow-up activity concerning the sale of ADR with the legal team without giving away her location.

“I think that my body is responding to finally letting go of all the stress I’ve been under the last few weeks.” she said.

As Sean drove across the Washington State border, into Lewiston, the sun was beginning to set.

“Pull into that drugstore, I need a few things,” said Mary, “I’ll only be a minute.”

It was almost dark when they drove up to the B&B.

“I’m feeling better too,” said Sean, “Now that we’re out of Washington, our ‘vacation’ can really start. Shall we go out for supper?”

“You know, I’d just as soon stay in and lie down a while. Would you go and get some takeout? Just a sandwich—nothing spicy—ham and cheese or a turkey club. Fruit juice. I saw a deli on the way into town.”

On the way to the deli, Sean found himself checking his mirror for suspicious cars. Compared to Seattle, Lewiston was like a ghost town. Sean had been on edge, but as he drove the nearly empty streets he could feel the rope of tension between his shoulders start to unwind. The deli wasn’t crowded and, outside of the clerk taking his order, no one even glanced at him.

“My cloak of invisibility must be working,” he thought, smiling.

To be invisible, to disappear, wasn’t that the reason he had come to the West Coast in the first place? And now he was going back to his roots—not exactly home—but to the place he where he had taken his first steps, where his dear Aunt Tina had taken care of him until he was old enough to be in daycare. Those early years on the farm were happy memories. The haze of time had given them a golden glow; it was as if he had been living in his own Garden of Eden. Sean also remembered crying on the day he left the farm to live with his mother in her apartment in D.C.  He thought about the good times he had with his mother when he was little: reading stories, going to the park, how she encouraged his interests. Then he thought about the times she would look at him with what seemed to be sadness in her eyes. No, it wasn’t sadness, it was longing, that longing was what he remembered most about his mother.

“Sir? Your order is ready, sir,” Sean’s reverie was broken by the clerk, who handed him his food.

He returned to the B&B. Mary was in the bathroom, with the door shut, when he entered their room. As he placed the bag from the deli down on the table Mary came out and sat down. She was trembling. A faint scent of sick was in the air.

“Are you alright?” Sean asked.

“A little queasy, but better now,” Mary said, as she poured herself a glass of apple juice. “I'll sip on this and… ” She got up quickly and went into the bathroom and shut the door. Five minutes later she came out, sat down and began drinking the juice.

“You really aren’t feeling well, are you?” Sean was alarmed.

“Is there anything I can do for you? There’s some chicken soup here.”

“I’ll try the soup in a minute. You sit down. Eat,” Mary paused. She forced a smile and took a deep breath, “You and me. A romantic getaway.  Our own private Idaho.”

“I was pretty sure about this before, but now I know… what it is that’s going on. When I stopped at the drug store I picked up a kit.”