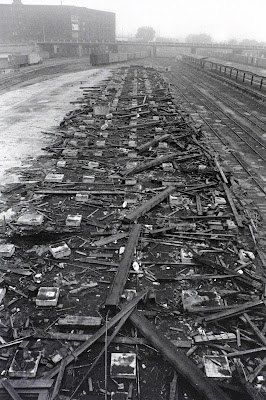 FITK is possibly the least sports-oriented blog in existence.

This post isn’t going to change that situation any.

Last night my “hometown” baseball team, The Minnesota Twins (Yay!) played the New York Yankees (Boo!) for the American League wildcard entry into the post season. I’m not going to cover that. Instead, I dug out an image (from the 1973 archives) of the place where the stadium now sits. The point of view is from what is now the mid-level seating behind first base. Most of the tracks in the picture are gone now; only the one on the very left remains as a depot for the commuter rail line. The building in the upper-left corner remains, the corner nearest holds a popular sports bar. The bridge in the back is now used for the light rail lines that service Minneapolis, Saint Paul and the MSP airport. The desolation in the center of the image is what is left of the old cartage sheds, where trains were unloaded and their contents distributed via horse-drawn wagons in the old days and by truck after WWI.

There was a game last night—in New York, not here—but you aren't going to find out the score from me.

"I dug out an image". I see what you did there with the baseball reference. If I were as prolific a writer as you I would challenge your least sports oriented blog statement, but I am not and I won't.