Sammy and the Cheese 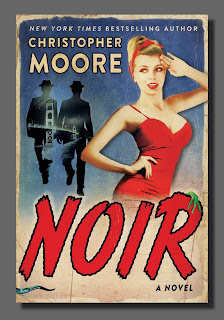 One more San Francisco crime novel for the pile.

Christopher Moore is a parody novelist, his send-ups of various literary tropes are consistently amusing and, at times, hilarious. This entry in his oeuvre is set in 1947 San Francisco where “Sammy”  (Samuel Tiffin) is a hot-headed bartender with a shady past, while “The Cheese” is Stilton, a curvaceous and mysterious blonde who has secrets of her own. The supporting cast of characters includes a douche-bag bar owner, various Chinatown denizens, a racist Irish cop, an Air Force general, the Bohemian Grove, a foul-mouthed nine year-old boy, mysterious men in black (wearing sunglasses, natch), a deadly snake and even a space alien to keep thing interesting. The writing is peppered with 40s idioms, as well as Moore’s gags and wordplay. It is very non-PC and gets more and more outrageous as it progresses, even becoming juvenile at times, but it is all done in fun.

If this premise sounds familiar, I recently reviewed Kelli Stanley’s City of Sharks, a private-eye novel which was set in the same era and used similar lingo (and many of the same locations), albeit in a more ham-fisted fashion. Moore’s book is lighter in tone, its frivolous nature might turn off a serious reader, but if you enjoy Carl Haissen you would probably dig this.