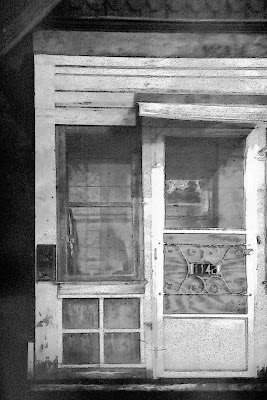 We had just moved in.

It wasn’t much of a house, built of poured concrete, in a part of town that had been forgotten by the rest of the city. Situated on a dead-end street, the neighborhood’s heyday was in the late 1800’s when it was on the fringe of the warehouse district; horse barns and small houses built for their drivers still stood, although the horses were long gone and all the teamsters drove trucks now.

$80 a month rent, about a third of our combined take-home wages then, and without having a car we could just barely afford it. We both wanted to leave home: we weren’t kids any more, we had overstayed our welcome there. We didn’t have much at first: a cast off couch, my bed, a bookshelf, a dresser, some kitchen utensils and our books.

We had been there for a couple of days. It was an uneasy co-existence, neither of us had experienced intimate living with someone, there were doubts about the wisdom of the arrangement on both sides. The sex was OK, for me, anyway. I couldn’t tell about her. She had initiated the relationship, but after the first few times she never seemed too enthusiastic. On the third night we were awakened by a pounding on the door. I pulled on some pants and went to see what the commotion was about.

There was a young man standing there, in obvious anguish, shouting my girlfriend’s name. I didn’t know what he wanted to do and she didn’t want to see him at all. I finally told him to go home and I shut the door. After a minute or two he left. I was shaking.

Back in the bedroom I asked my partner what that was about. I knew that she had had a boyfriend, but, as she did with most of her past, didn’t talk about it. Finally she said that they had been a couple when she was in high school, and he still wanted to see her. I asked if he posed a threat, she said no. She told me that he wasn’t a jock, that his only athletic prowess was in speed skating. “He had won some medals.” she said.

After about an hour, I calmed down enough to go back to bed. He never came back, we never spoke of it again. Years later, after we had broken up, I thought about some of the fragments of her history that she had told me: that she had been out of school for while, but had skipped a grade (she was very intelligent) so she had graduated on time. She mentioned that she had been “messed up” and had eye surgery at the same time. I had never pressed her on any of this, I was not terribly interested.

She had had a baby.

The timeline fit, she even wore the appropriate stretchmarks. Was the speed skater the father? That might explain his turmoil, why he didn’t want to let her go. After the incident, things got better for a while, but then she became distant. I finally had to ask her to leave. I don’t think she ever took up with him again, I heard that she had become a lesbian and then, in a move that was even more startling, an attorney.