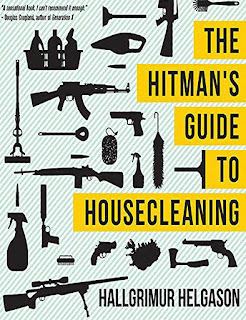 The Hitman’s Guide to Housecleaning

This review, masquerading as an Airwaves update, actually has some connections to that event. Most of it takes place in Reykjavík in 2006, the year I first went to Iceland Airwaves. One of the main characters works for the Airwaves and much of the action takes place in and around familiar Reykjavík landmarks. I was completely swept up in the location and events of the setting. Hallgrímur Helgason is a satirist who specializes in skewering Icelandic culture, his outlook is always acidic; the protagonist of this book is one Tomislav Boksic, formerly a Croatian paramilitary soldier who became a hitman for the Croatian mafia in the U.S. scoring 65 kills with a hitch until he messed up big-time with the 66th—a FBI undercover agent. This sends him fleeing; he is spotted in the airport waiting to catch a flight to Zagreb so he kills a priest in an airport bathroom and assumes his identity and flight plan, ending up in Iceland.

Hallgrímur wrote this book, his first in English, and he has a knack for clever word-play, in both English and mangled Icelandic. It is very dark—at times almost revolting—but that is an essential element of the book’s premise. It is also very funny. That it is set in a particular era and has numerous references to events of that time gives it a historical feel; the mid-aughts were special in Iceland. It was a time and a place that I was aware of as well as a participant. That said, the book might not mean as much to someone who is less aware of the milieu from which it sprang.

I mostly remember it as funny. Woman at 1000 degrees was a masterful work and, for me anyway, more memorable.

Definitely funnier that Woman, for writing in a non-native language he is really good with the nuances of English.

Woman is a great book.

I am living, eating and sleeping Iceland now. We’ll be renting a car this time and exploring the countryside so that is another thing to think about. After that—four days of music!

Crazy busy getting ready for KFJC's broadcast from Berlin and that trip. Will have to take some time to figure out what shows we will want to see at AIrwaves. Looking forward to seeing you and the Weaver - perhaps breakfast at Prikið ?

Prikið sounds great- we'll probably be sick of eating Muesli everyday for breakfast for the previous week. Hopefully the full schedule will be available by the end of the week, I've already picked out my wanna-see acts, I'll post about them next week. I'm really looking forward to see what Jofriður has up her sleeve.