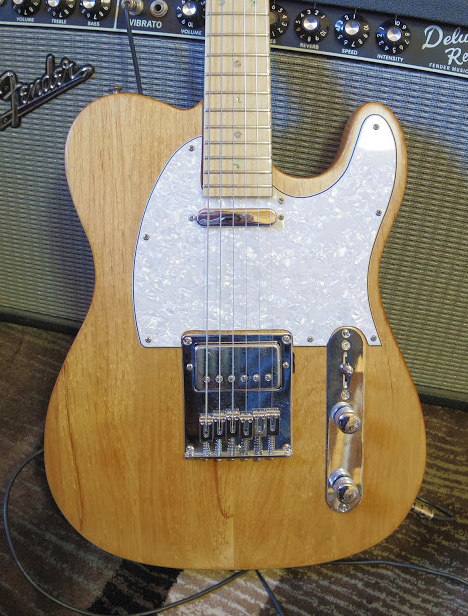 This is a mix of parts: mostly from Guitar Fetish, with a J&D neck (taken from my PRS Partscaster.) The bridge pickup is split, with 5 way switching. It is basically a Strat wiring scheme with one tone control. The bridge side of the humbucker is wired though a .033 mfd capacitor, when played out of phase in the 4th position (with the middle pickup) it has a nice 'acoustic' sound.

It is a great guitar, I used to play it a lot but it went in the great guitar purge of 2019.

Faces in the Crowd 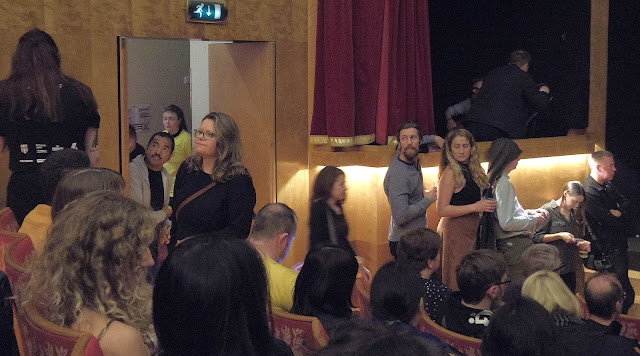 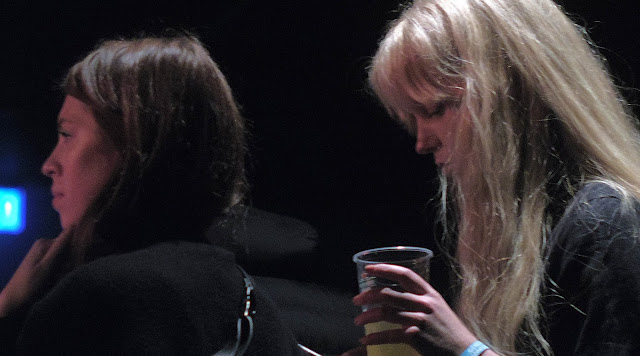 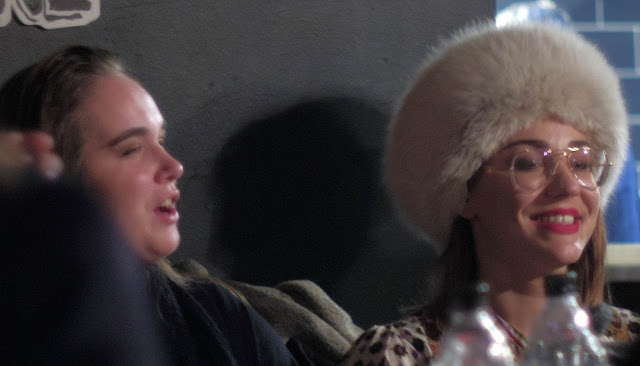 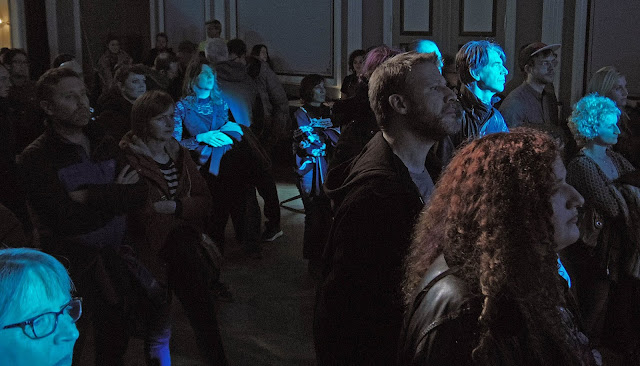 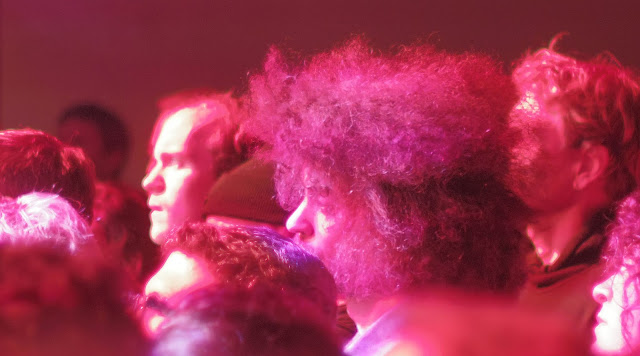 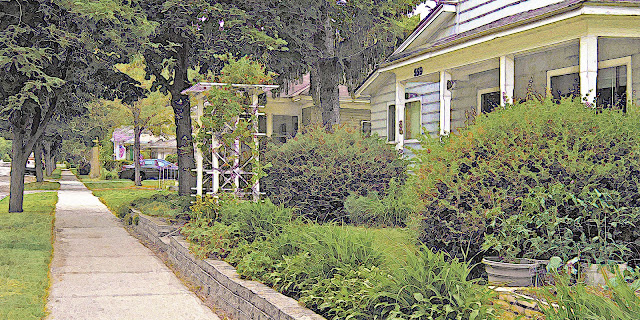 Flippist World Headquarters™ is located on this verdant street in a small town about twelve miles north-west of Minneapolis, Minnesota. When we moved in this house thirty-seven years ago it was a place that had seen better days. The one thing it did have going for it was its location—a few blocks away from the “downtown” business district. Groceries, clothing, shoes, drugs and various other shops were within walking distance.

But there were still some problems. After the Bush recession of 2008 there were many houses on my block that were in foreclosure or for sale. But over the last ten years my street has slowly upgraded. The worst houses have been torn down and replaced with nice (albeit generic) split levels. Several garages have been replaced and the utilities and sidewalks have been upgraded. After the commuter rail station was opened (a half-mile away) my sleepy little neighborhood was suddenly hot. Houses that are put up for sale are sold in days, sometimes for higher than the asking price. The 4 square mile center part of the town now has fewer than a half-dozen houses for sale—less than there were on my block at one time! The sidewalks are full of all kinds of people walking: oldsters (like me), families with kids, even teen-agers!  Diversity has even made some headway.

So now my Zillow evaluations have gone up about 15% a year for the last 7 years, as much as it had done in the previous 30. As have my property taxes.

Maybe we should sell now while the market is still sizzling. 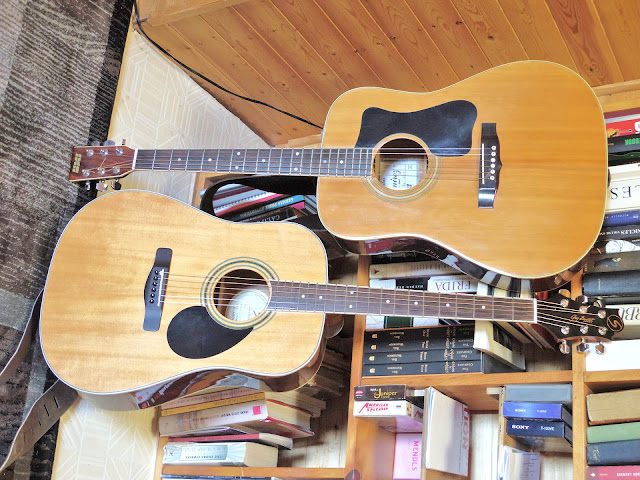 These Martin clones are pretty close to each other.

The "UMI" (made in Korea) has a nice balanced tone, with some real low end response. $20 at a thrift store. It had a cracked heel, but it glued up real nice.

The Samick "Greg Bennett design" GD-100SPK/N is very similar, not quite the bass response. It is a much newer guitar, it may mellow out as it gets older. It was made in Indonesia. I found it in a dumpster, with not a mark on it! It needed a little set-up work, but now plays and sounds good.

Not too bad: two perfectly usable guitars for $20.

Update: Sold both at the great guitar purge for $60 each!

The Last Homely House East of the Sea

The Weaver turned me on to Kate from Northumberland, whose YouTube series The Last Homely House on the Sea features her, her critters, various art projects and general musings on life. This particular one about cleaning out drawers full of bunting supplies showcases her cat’s rear end as well:

Most appropriate in light of my recent purging efforts. These are very low-key videos but I find them strangely fascinating… a sharp but slightly daft aunt prattling on about the things she loves.

There are dozens (if not hundreds) of them and more at her Patreon site. 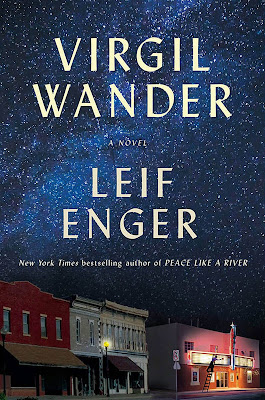 This, the third novel by Minnesota native Leif Unger, is set along the north-west shore of Lake Superior in the fictional town of Greenstone, a rough composite of Two Harbors and Grand Marais with the Temperance River thrown in for good measure. Virgil is the owner of a failing cinema as well as being the part-time city clerk. As the book opens, He has accidentally crashed his car into the lake but is rescued and wakes up in a Duluth hospital. He is suffering from some brain trauma, not extreme, but affecting his relationships to the people in the town (and giving the narrative a definite air of unreliability.)

A well-developed cast of characters populates the book, each character has their own agenda (and secrets) that becomes clearer as the book progresses. The town is considered cursed by some, so much so that the city’s powers-that-be decide to hold a “Hard Luck Days” summer festival, an event that seems to be cursed as well.

Enger is a great writer and his other two novels—Peace Like a River and So Brave, Young, and Handsome—have been critically acclaimed. This book reminded me of Garrison Keillor’s Lake Wobegon novels but is more subtle and contemplative. While it does contain some elements of a mystery, it is nothing like Vidar Sundstøl’s Minnesota Trilogy. It is genial, even a little precious at times, but I think it truly captures the Minnesota North Shore mindset.

The Flippist World Headquarters™ wall of guitars is no more: 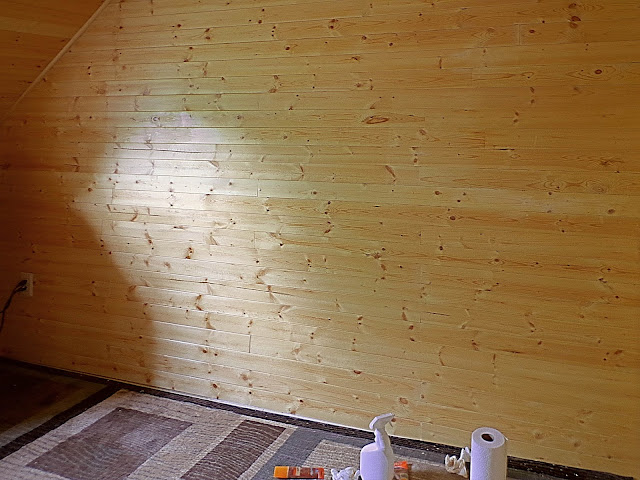 My long-planned and often-delayed garage sale was held last weekend; ’twas a resounding success. A large majority of them are now happily residing with new owners. I still have a few guitars (the most expensive ones, naturally) but they are destined to be sold as well. The south wall of Flippist World Headquarters™ is empty for now. I’m going to leave it that way for a while; it will probably end up covered with photographs and artwork (here’s looking at you, Shoshanah.)

Jettisoning my material goods has never bothered me; no regrets, coyote.

In addition to reconsidering the role of guitars, I've been pondering where FITK fits into my life. It has never been what is considered social media. I’ve never experienced the feeling of crashing a private club from this blog that I get from Facebook™. I still follow a few Instagram accounts as they are the only option for following some people I like. Twitter, in the right hands, can be very good, but still not as satisfying as a well-written blog. My visitors are few but varied; a world-wide mix that I’m grateful for. A “digital minimalism” is probably the best way to describe my approach. There are still a few things I’d like to accomplish here, as long as I get the sense that at least a few people are getting something out of it FITK will continue.

The wall, near its peak: 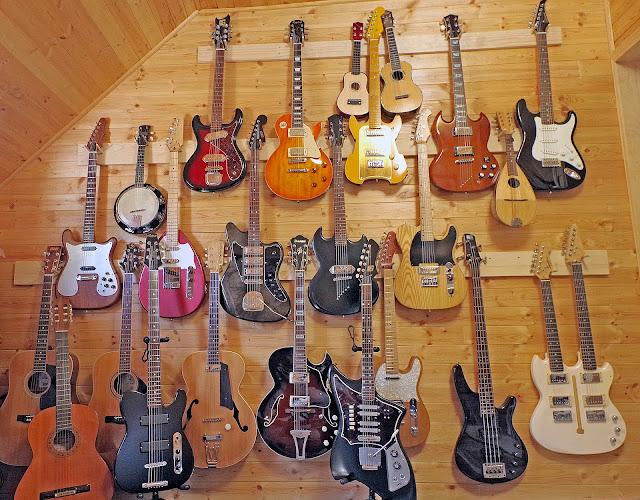 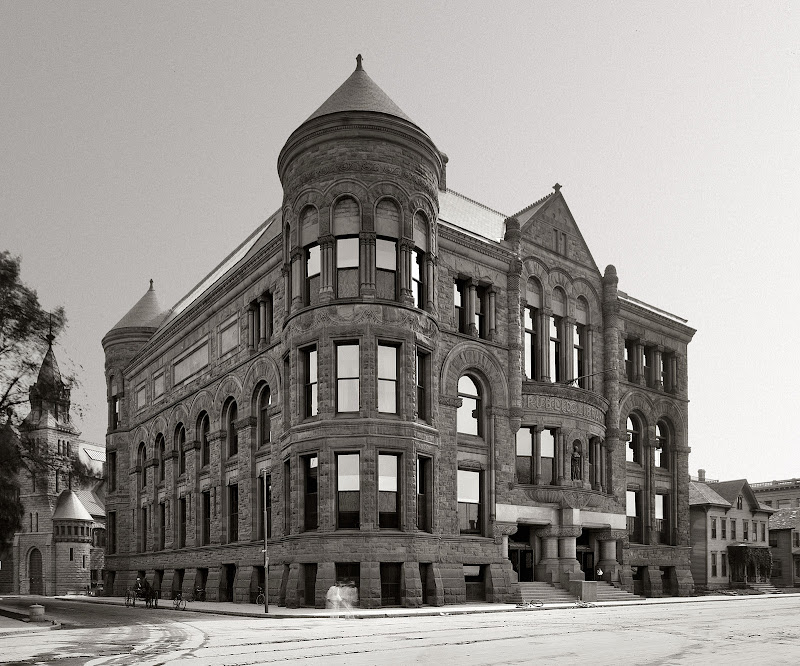 When I was a child there existed a castle, a haunted castle full of spirits. It was a fortress which stood in the midst of an evil forest populated by strange and devilish creatures. I was a ten year-old who had no defense against such malevolence, save for my own naïveté. I had heard tell of the place, for it was spoken about in hushed tones by those neighborhood wise women who toiled as keepers of the scrolls. They spoke of its majesty, its quietude, and the mysterious wizards who trod upon the polished granite floors and climbed the wrought iron stairways. There was even talk of an Egyptian mummy that “lived” in the basement.

The “forest”: a cluster of bars, strip clubs, pawn shops and transient housing. The “creatures”: winos, drifters, muggers and hookers. The “Castle” was the Central branch of the Minneapolis Public Library. I only went in it once, for it was downtown, and a five mile bus ride. But I simply had to go. As you can see, the exterior (which hadn’t changed in 60 years) was formidable. The interior was dim and what light there was came from large globes, hanging from chains. I remember wrought iron stairs and shelves of old leather-bound books. I was there looking for Bram Stoker’s Dracula but I left empty-handed, being too shy to ask the desk librarian for assistance. I ran from the building in near terror. In a few years, a new modern library was built at the other end of downtown, with walls of glass, a planetarium, and a large museum. It was a friendly place, OK in its own way. Now it has been demolished as well, replaced by a stunning, although somewhat intimidating modern structure by a famous architect.

My childish fears of the castle were groundless, of course, but there really was a mummy!

Special thanks to Rose for her post which revived this memory.

Image from The Library of Congress, via Shorpy. 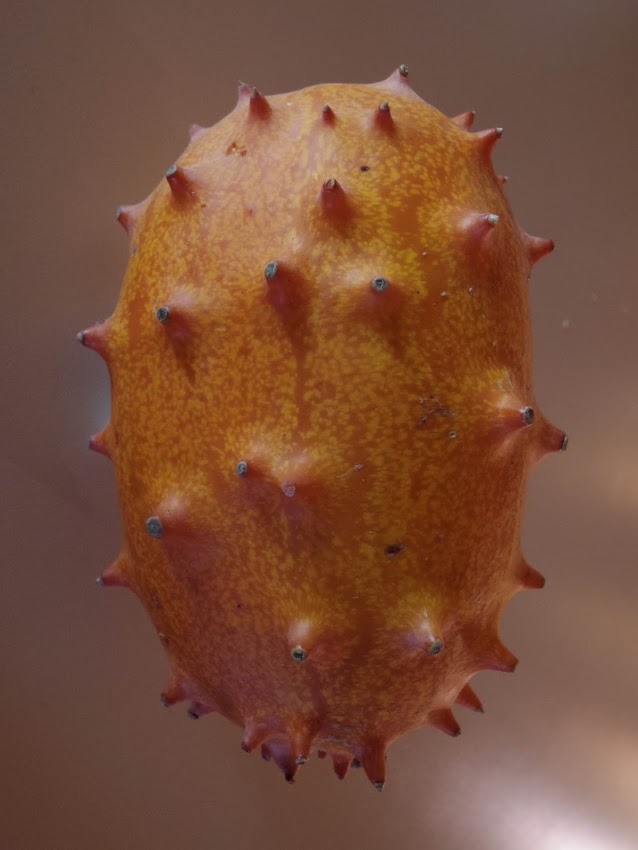 Even more bizarre on the inside: 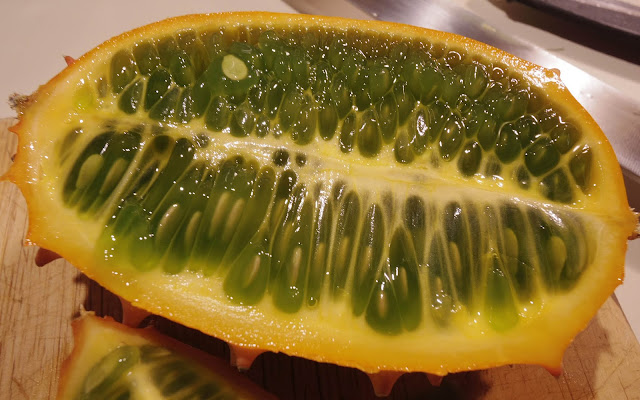 We Are Proud Autistic Women

Many years ago one of the regular FITK correspondents was Kristín Vilhjálmsdóttir. We met over coffee in Reykjavík a few times. I found her to be articulate and sensitive with a no-nonsense attitude. Recently she has been involved in the making of the film Að sjá hið ósýnilega (Seeing the Unseen), a documentary about women who are on various levels of the autistic spectrum. It was inspired by the poem We Are Proud Autistic Women by Kristy Forbes. We had discussed many of the issues which the poem addresses so her interest in this project is understandable.

Here is a video of Kristín reading that poem (in Icelandic, with captioning) 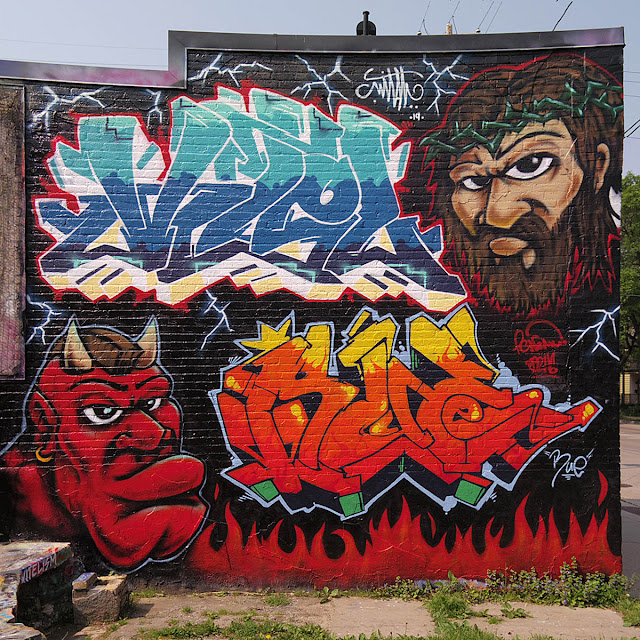 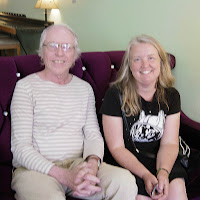 Last Friday I had a rendezvous with my artist/blogpal Shoshanah and her associate “Z.” We met at Mother Fool’s coffee shop (above) on Williamson Street in Madison, Wisconsin. “Willy Street” has been a locus of bohemian behavior for a long time. In the late 90s it had reached its nadir (crack and meth will do that to a neighborhood) but it has had quite a resurgence in recent years. Lots of quirky shops, some corny but others quite inspired, and many street art pieces. Having the St. Vinnie thrift store there for some cheap inspiration doesn’t hurt either. There is even a YouTube feature film that was filmed in the Willy Street Co-op!

Shoshanah was wearing the appropriate footwear for an art crawl: 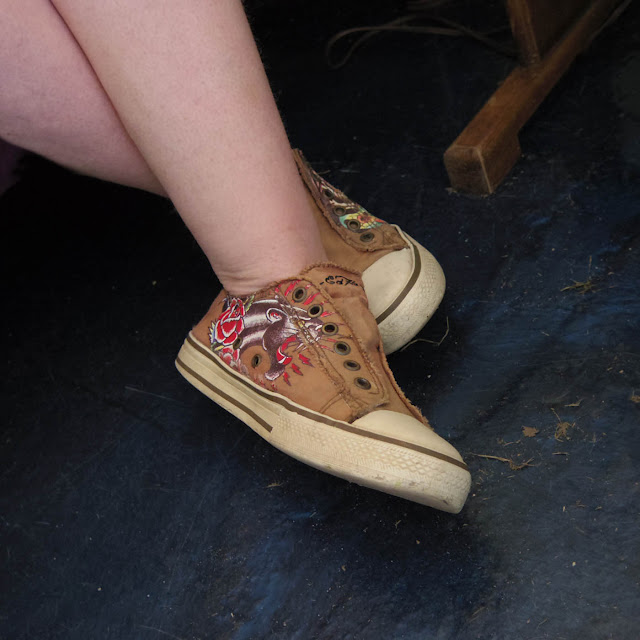 After a nice chat about the perils and pleasures of ovine husbandry, the three of us hit the street in search of culture. Shoshanah used to live in this area so I had an expert guide: 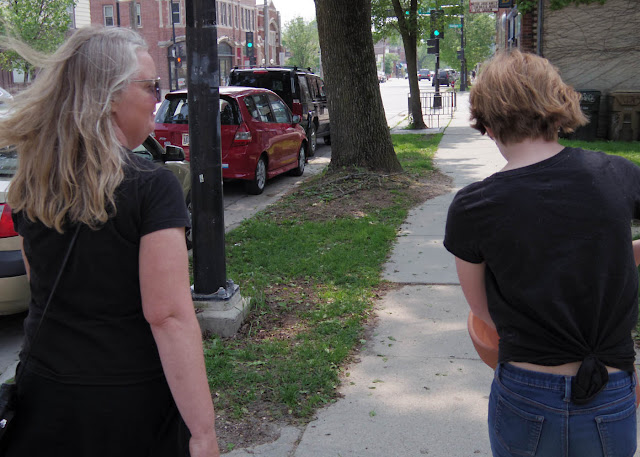 This festive chicken cast a wary eye on us as we walked by: 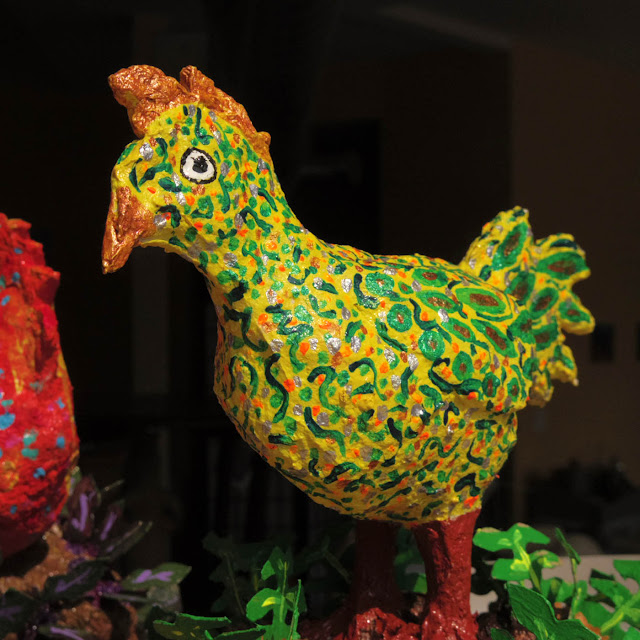 The Batch Bakery had an industrial planter and a virtually indestructible Little Free Library in front of the shop: 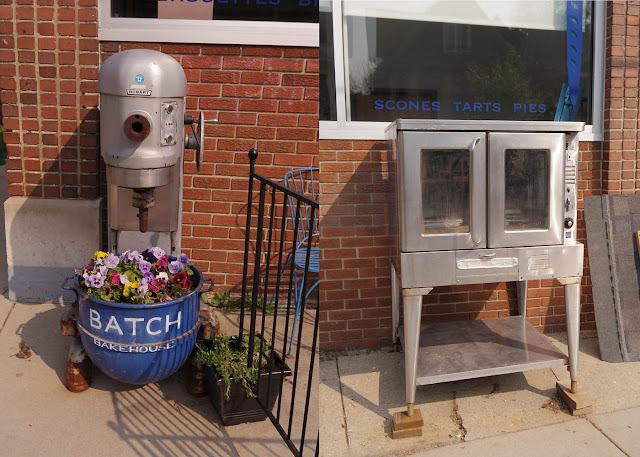 One resident’s front yard was an art installation… just because: 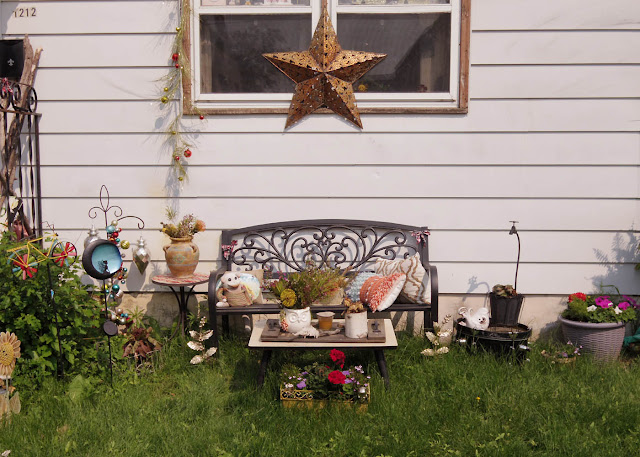 Recycled art was a recurring theme: 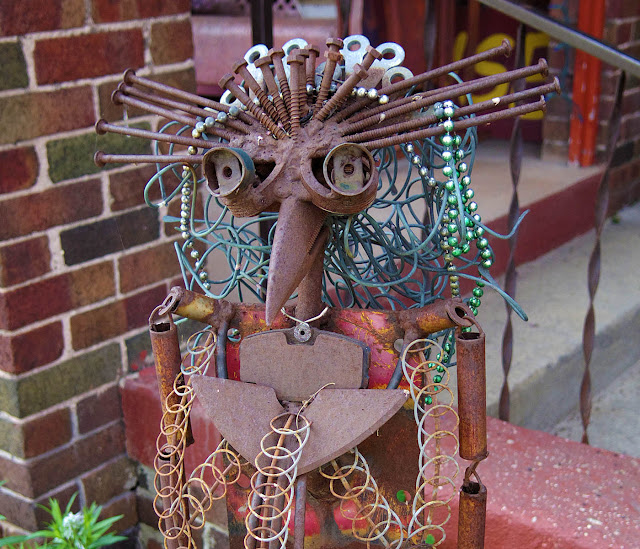 But the absolute topper was the Patreon art work Shoshanah had made for me: 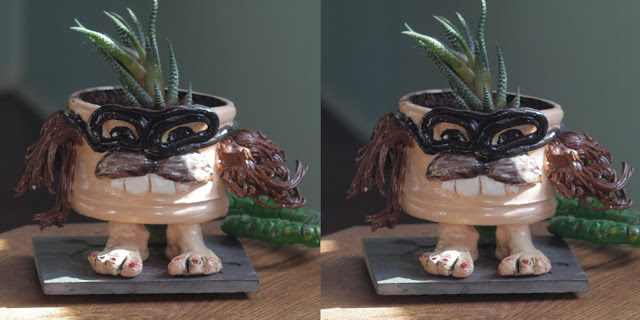