This is Chapter 8 of The Inheritance, a serial fiction novel on FITK 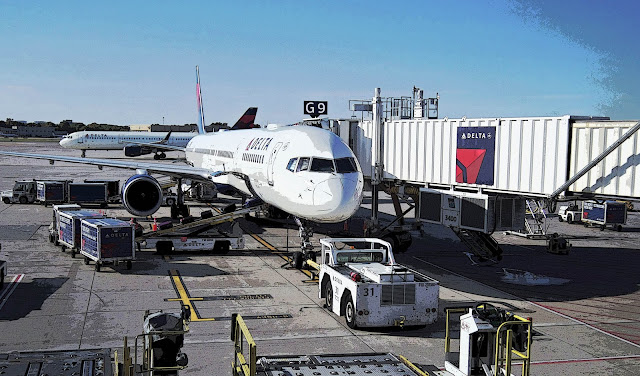 Sitting in the G9 gate area in O’Hare, Mary and Mareka were talking as they waited to board. Sean had gone to get a newspaper.

“This has been quite a trip!” said Mary to her daughter, “And there will be some big changes for us when we get home.”

“What changes? Will it be something I like?” said Mareka, “I already know that I will be starting school.”

“Yesterday, while you were talking with Edwin, Sean and I were in the coffee shop we got in touch with Jo. Jo has been looking for a house for us and she found one that looks very promising.”

“We will be moving from the apartment then?” said Mareka, nervously.

“If we get the house. We’ll look at it this weekend and if we like it we’ll make an offer to the people who own it. No one lives there now, so we could move in right away. Let me show you what it is like,” said Mary, opening her laptop. When the listing came up Mary clicked on the slideshow. “You can look for your self, just click on the triangle to go to the next picture.”

“I see that you two are house-hunting,” said Sean, who had just returned, “Tell us what you think, Mareka. You are a part of this decision too.”

Mareka slowly clicked through the images. She stopped at one of the images of the backyard. One side of the yard was abutted by a huge boulder.

“We’ve got an appointment for Saturday morning, if it is as good as it looks, and we’re lucky, we might be moving soon!”


“… and you’re sure they are going to be at their apartment at six p.m.? We’ll have a crew there, thanks for the scoop Ted.”

William Preston, the news director of Seattle’s TV station KWAH hung up the phone. KWAH had built its reputation on sensational news stories; stories that never let facts get in the way. He wanted to intercept the family in the airport but there were still restrictions in place due to Covid-19 about ‘non-essential” personnel—which included camera crews. Since the rioting after George Floyd murder the police and the media relationship was decidedly more hostile.

The station had been slow on the uptake during the scandal concerning Sean and Mary and the coverup in the “Billygate” affair. Even more humiliating, the station was scooped by Techcreeper, an internet tabloid. Preston had had Sean and Mary on his radar ever since. His old college buddy, Ted Benson, was the chairman of the board of the assisted living facility where Sean’s aunt Tina had lived until her demise. Over the years, Benson had kept Preston updated on her activities, especially as far as Sean was concerned, but there wasn’t much news that the life of a 90-year-old could generate. Her death, however, and the astonishing bequeathing of over 200 million dollars worth of stock to the seven-year-old daughter of Sean Carroll and Mary Robinson was something Preston knew would create a sensation, not just in Seattle where it would be a welcome change from recent events, but also around the world. He would do everything he could to break the story and keep it fresh.

After their flight touched down, Mary checked her phone for messages. A text from Jo said: Call me ASAP. Mary punched Jo’s contact number on her phone.

“What’s up?” said Mary after Jo picked up.

“There are reporters and cameramen and a crowd of people downstairs in front of the lobby and at the entrance to the apartment building garage. I asked one of the cameramen what was going on, and he said they were there to cover the arrival of a seven-year-old heiress—it was a big story—and it had been promoted on Twitter all afternoon. I talked to some of the other people who were there and they said they were there to confront the ‘Icelandic Witch.’ Some pastor from cable TV had also used Twitter and his YouTube channel to tell them to stone her. The witch they are looking for is you.”

“I’m across the street at Anchorhead Coffee, I’m fine, nobody knows me,” said Jo, “The crowd is chanting ‘Burn the witch, burn the witch.’ I don’t think you should come down here, at least not until this circus dissipates.”

“Good idea, I’ll tell Sean and call you back when we decide with to do.”

The airplane had arrived at the gate and the first class passengers were starting to collect their bags from the overhead bins. Mareka was looking out the window, staring at the luggage handlers doing their thing.

“Sean, I just talked to Jo, there’s trouble at the apartment,” said Mary, “There are camera crews and demonstrators at the entrance. I’m afraid that we’re in the limelight again–my work with the Hilmar and the spells app has been attacked by some preacher, and someone must have told the media about Mareka’s inheritance. She said it is an ugly scene, and both stories have gone viral on Twitter.”

“Ted Benson, no doubt, for the story about Mareka,” said Sean, “I didn’t like the looks of that guy. The preacher I know nothing about but I’ll get our lawyers on it,” Sean paused a moment to think things over and then said, “Let’s spend the night at a hotel, with any luck this should blow over by morning, hopefully the police will break it up if it goes on for any length of time.”

“O.K.,” said Mary, “I hope it doesn’t turn into a riot. I’m wondering how will Mareka take this.”

“I’ll see if there is a suite available at the Motif, that’s only a couple of blocks away from our building and we can walk home when the coast is clear. It has a rooftop lounge with games and things that will give Mareka a space to unwind before we go to bed. I’ve already reserved a cab and with any luck we should be able to get out of the airport without being seen. I’ll get the bags while you and Mareka hide out in the Sky Club until I call.”

The queue of passengers waiting to deplane had begun to move.

“I can’t wait to get home!” said Mareka.