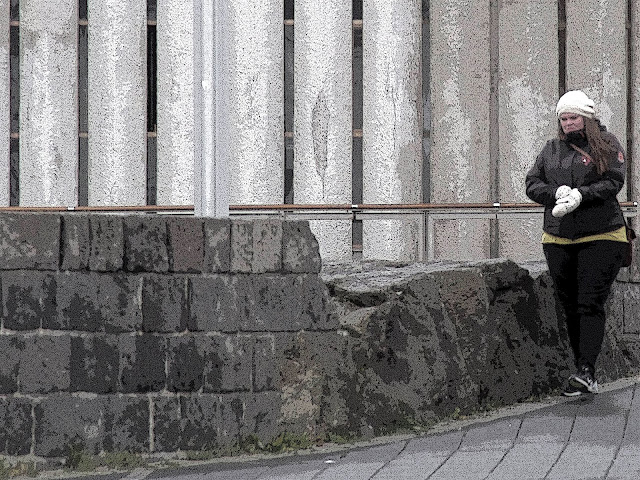 With favoring winds, o'er sunlit seas,
We sailed for the Hesperides,
The land where golden apples grow;
But that, ah! that was long ago.

How far, since then, the ocean streams
Have swept us from that land of dreams,
That land of fiction and of truth,
The lost Atlantis of our youth!

Whither, ah, whither? Are not these
The tempest-haunted Orcades,
Where sea-gulls scream, and breakers roar,
And wreck and sea-weed line the shore?

Ultima Thule! Utmost Isle!
Here in thy harbors for a while
We lower our sails; a while we rest
From the unending, endless quest.

Sixteen years ago, when I was researching Icelandic blogs for an upcoming trip to Iceland, I ‘discovered’ Auður Ösp; I’ve been following her ‘quest’ ever since. Her example was the prime inspiration for the starting of Flippism is the Key. We met in real life in 2006 and this year I had a ticket to return, intending to meet up with her again. You may have heard of something that happened that prevents that scenario from occurring. While my personal story (compared the billions of others in the world) isn’t that important I find hers to be compelling.

For me, Auður’s greatest appeal was always her writing. An effective and personable communicator—her latest post is about how the pandemic is affecting her and is no exception to that rule. Auður (and her partner Hrannar) run the I Heart Reykjavík website, offering tours, links and a wealth of information about all things Icelandic. I have mentioned it many times during last ten years as I watched it grow into the preeminent resource for tourists visiting the island. She has been the face of Iceland to the thousands of people who have taken her tour or otherwise used her services. More than that, she “pays it forward” with contributions to worthy causes, including raising money by holding dinners in her home.

Now, the Covid-19 crisis has caused her business to collapse. Completely. She is stoic about it—Icelanders have faced hardships many times before—but this is a crisis of an entirely different magnitude. If it goes on as long as experts predict it will be a catastrophe, not just for her, but for all of Iceland.

I hope they get through this okay. Reminds me a little of Independent People. I am really hoping we get through this in a couple of months, but I know that the effects will be felt for a long time.