This is Chapter 23 of The Inheritance, a serial fiction novel on FITK 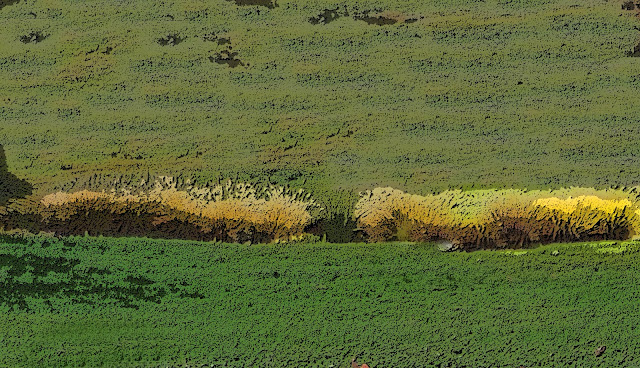 “I’ll be out back, mom,” said Mareka, hopping down from the kitchen stool where she had been eating breakfast.

“Put a hat on,” said Mary, “Your natural tan won’t protect you completely.”

In the backyard, Mareka was eager to try a ‘power’ that had been revealed to her in her dreams the night before. She found a perch on the large boulder that defined one border of the yard and began to look at the grass in a new way. As she concentrated on the lawn patterns began to form. Stripes appeared, then a checkerboard motif emerged. The grid was subtle, so subtle that a causal observer might not have noticed it. Mareka laughed when she saw the grass responding to her mental gymnastics.

“Nice trick!” said Mary as she walked out onto the patio, “Can you mow the grass as well?”

“I will do no harm with my powers,” said the girl, “Do you know when Jo will be back?” The pattern in the lawn dissipated, then a giant question mark formed in the grass.

“She said she would probably be back sometime tonight,” said Mary, “I expect that she will text me today, probably when she’s ready to leave.”

“I’m going to miss her when I go to school.”

“You will still see plenty of her, but you’ll have new friends, kids your age, you’ll be busy learning things, things that the powers won’t help you with. Like math.”

“Ha ha, that grass trick is one that you had better keep under your hat,” said Mary as she tugged the nón lá that Mareka was wearing, “Anything that magical will scare people.”

The letters O and K appeared in the lawn.

At the lawyer’s office in Spokane Jo presented her ID to the receptionist who was seated behind a plexiglass barrier.

“When the papers are ready for you to sign, you can go through the door to the right. It is a room that has been sanitized, as well as the papers and pens that are in it,” said the woman behind the desk, “Artie will be there—virtually—on a screen, he will be able to see you and guide you through the forms you need to sign.”

The lobby reeked of disinfectant.

“My signature cologne,” thought Jo as she sniffed the office’s air through her mask, the day spent cleaning her mother’s house fresh in her mind, “It isn’t exactly White Shoulders but I’m not in the market for romance right now.”

Jo thought of her life since leaving Spokane. She was 35 and single. Mary and Sean were fine people and Jo had drifted into the the role of a go-between: planning their schedules and, after taking some business accounting classes, overlooking their finances. Mareka was the exception, of course. Jo had spent a lot of time with her, in a real sense Jo had become a member of the family. With Sean away from home so much during his promotion of his grandmother’s art, and Mary involved with her ‘Magick’ apps, Jo became a big sister to the girl, or perhaps the youthful aunt featured in so many YA novels. Despite all this history, everything changed overnight with the lock-down imposed in reaction to the spread of covid-19. Sean’s grandmother’s art was no longer being shown and interest in Mary’s supernatural app became another casualty of the pandemic. Magick was no match for a virus. Since the Covid-19 pandemic, Jo’s social life, which had been pretty minimal before social distancing, was now non-existent. Mareka would be going to school, at least in some way, in the fall.

“Now what am I going to do with the rest of my life?” she thought.

“The papers are ready for you,” said the receptionist, “and please use the hand sanitizer before entering the signing room.”

Jo did as she was told and entered the ‘signing room’, obviously a remodeled cloak room. There was a desk with the papers and a monitor.

“Hello again, Ms Sanford, please excuse the technology” said Arthur ‘Artie’ Shapiro, pictured on the monitor, ”I’m sorry for your loss, your mother was a fine woman. Did you get to say goodbye?”

“Yes, that is common now.” said Artie, “As to the papers, they are what we discussed on over the phone on Saturday, you can read through each article if you like, you will see an arrow next to each place you need to sign.”

“Are you aware that you are trending today?”

“What are you talking about?”

“It may be nothing, its just a Twitter thing, but you should check it out,” he continued, “Do you have a lawyer in Seattle?“

“Not personally,” replied Jo, “But the firm I work for has excellent representation.”

“There is also the matter of your ex, Mr. Stroud,” said Artie, “He is a fugitive from justice, wanted in connection with a drug-deal gone bad. If he tries to contact you call the police immediately, He’s killed before.”

“And so have I,” thought Jo, “Thanks for the warning, Artie.”