Fire on the Mountain

This is chapter 39 of The Inheritance, a serial fiction novel on FITK 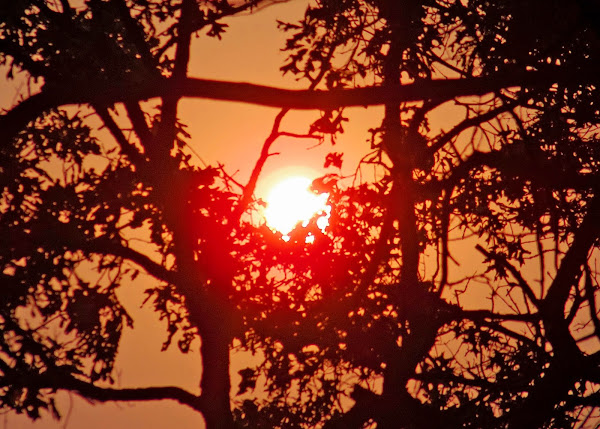 Mary woke with a start.

She had been dreaming that Mareka was in a forest that was burning. The fire had surrounded Mareka and tendrils of flame were licking at her clothing. As Mary shook off her cobwebs she realized that Mareka was calling her. Mary got up and went to her daughter’s room where Mareka was calling out for her in her sleep. Mary put her hand on the child’s forehead and spoke to her in a soothing voice.

Mareka slowly awoke. She was breathing heavily and restlessly turned from side to side.

“Oh mother, everything was on fire, I could hear the animals screaming, it was awful.”

"I had bad dreams too, dreams of fire. The smoke in the air is from the fires, to the east of here, and in Oregon and California. A lot of people are having those dreams.”

"When will the smoke go away?” aked Mareka.

“I don’t know, they’ve been saying that it may be tonight, or it may be tomorrow,” Mary said, “Com’on, get dressed, we’ll have some breakfast before school starts.”

When they got to the kitchen, Jo was already there.

“You guys didn’t sleep so well, did you?” said Jo.

“I heard you talking,” said Jo, “So I thought I’d make you some blueberry pancakes. They’ll erase any bad dreams you may have.”

“What’s today’s lesson?” said Mary, “Are you ready for it, Mareka?”

“Numbers and adding,” said Mareka, “I’m ready, but I don’t know about Benny. He isn’t so good with numbers.”


Barbara Merrit was meeting with Marcel DuPage for the first time since they had gone to the Khorosho Tavern. They were in the Olympic Sculpture Park, wandering in Wake, the huge Richard Serra sculpture.

“So, you were telling me over the phone that you had a little action the other day?” said Marcel, “I assume that’s why we’re here, playing a game of cloak and dagger.”

“It’s no game, I nearly met my maker when I was walking my dog," she replied, “My dog wasn’t so lucky.”

“Someone killed your dog?”

“I was next, but an FBI agent intervened.”

“Evidently, when you and I were poking around above that tavern we had stumbled across what the agent said was a “sleeper cell” of foreign agents. He wouldn’t say what country they were from but I think you can figure it out.”

“And now we’re both in danger?”

“Maybe, maybe not,” said Barbara, “The cell has cleared out. Whether they will be any further action against us remains to be seen, or so says the FBI.”

“What happened to the man who attacked you?”

“He was shot and killed, but there was no mention of it in the news. The agent told me that I should forget about it. Evidently they have ways of disposing unsavory characters. He also said that if I continued my investigations that I might be the one being disposed of.”

“You could stay with me, if it would make you feel safer,” said Marcel.


Mareka and Jo were sitting on the front porch, waiting for the other children to arrive at their little home school. The sun, glowing through the smoke, was surrounded by blood-red skies.

“Is this how the world will end, Jo?” said Mareka.

“No… look! Here come Benny and Jack,” said Jo, “And that’s Sara coming up the hill with her parents. This is the way the world, your world, begins… with math!”

The children filed into the garage/classroom to begin their school day. Sean and Mary were in the kitchen discussing the publication of the new book of the art of Sean’s grandmother Emily.

“Well, it’s pretty obvious that Mareka’s commentaries are the best choice for the text, even if they have been channeled through her from Emily herself,” said Sean, “Have you gotten any further communication from Emily?”

“No, nothing at all,” said Mary, “When she was with us, Emily said she wanted to see her great-granddaughter, I guess this is the way she’s doing it. How can we justify putting what a seven-year-old said into an art book?”

“We could just say ‘Text by M. Robinson’ which wouldn’t be untrue.”

“I can see that coming back to bite us, but it’s probably the most workable solution,” said Mary, “Have you heard from the printer about the feasibility of doing a print-on-demand of the individual works?”

“He didn’t think it would be a problem, once the initial scans have been done. He’s going to have a test print and a breakdown of the costs for us next week, if we don’t all perish from the smoke by then.”

“Is it just me, or has it suddenly gotten brighter outside? The wind might finally be shifting.”

They went out in the backyard and could see a definite clearing of the air.

“Maybe this is an omen,” said Mary, “Maybe things are going to start looking up.”

Next chapter: Mareka Paints Her Masterpiece