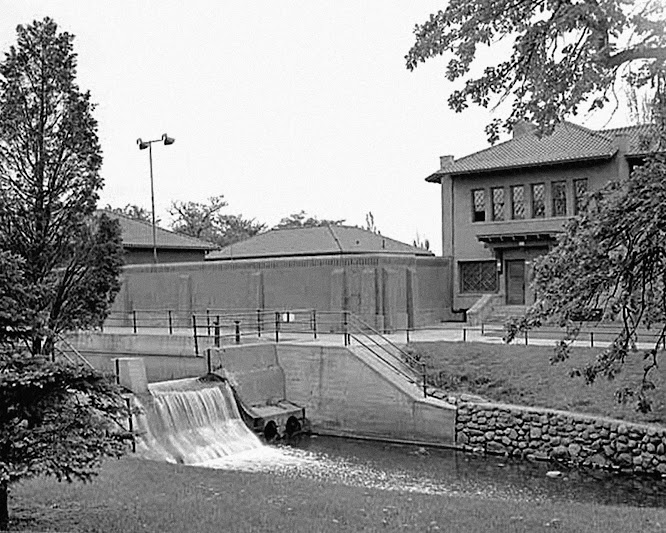 A scene from my childhood, from another world really, an ancient civilization lost to the vicissitudes of time. Webber Park was already a half-century old when I began to use it in the late 50s. It was actually a complex: a swimming pool; a library; a skating pond; a creek. It even had its own little waterfall (pictured above) in addition to the standard picnic tables and walking paths.

The library was a huge part of my life; I can still remember the thrill of discovering other civilizations in fiction and especially science fiction. The cool and quiet reading rooms were a sanctuary, looking over a swimming pool full of screaming children. The pool offered another form of education. Without the trappings of clothes we became closer to our primal selves there. The creek and pond surrounding the complex gave us a glimpse of the beauty of nature, while the little dam (above) gave us wee folk a taste of danger. The rest of the park was space, a concept that had had been otherwise ignored in the rigid planning of our residential subdivisions.

The park is still there, the new pool (closed due to covid-19) is now “natural” but the library, which had been torn down (as had its replacement), has been replaced with a modern facility about half a mile away. It is still technically in the park but its nexus has been lost. It was an oasis of civilization in a cultural desert.