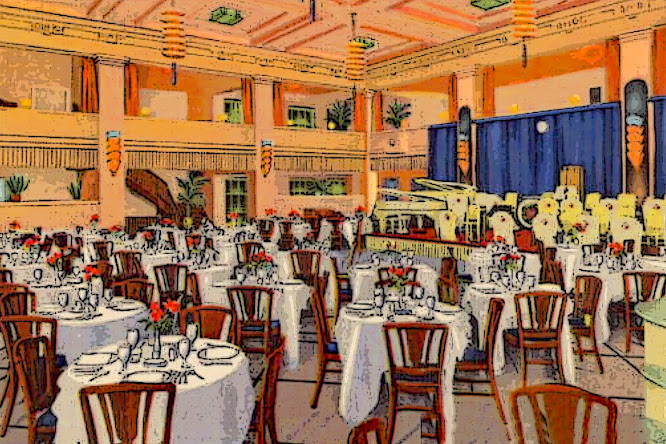 The party was in full swing now, with guests arriving every few minutes. The sound of conversation filled the house and wafted over the yard.

Then it stopped—Ann had arrived.

Ann was Eddy’s girlfriend when the band was at its peak. She had become a persona non grata when she broke up with Eddy but that void was quickly filled by Iris, one of the other ‘girls’ who had been following the band. Ann and Eddy brought out the worst in each other, especially when they were drinking. Once they did split, however, the drinking or both of them stopped—a chicken or egg paradox, perhaps. Norm, the tenor sax player, come over to Tommy when he saw her come in.

“Fat Cats,” said Norm, “One of the high points of my musical career.”

“The Metropolitan gig,” said Tommy, “How did we end up playing for a bunch of bankers and managers and their wives (and girlfriends) in the city’s oldest businessmen club?”

“Her sociopolitical analysis was pretty accurate, though.”

Seeing Ann again triggered Tommy’s reminiscences of the most notorious partner of any of the band members.

It had been a very odd gig for a rag-tag group of musical anarchists. The Metropolitan was, to put it mildly, stuffy, but whoever was in charge of booking the entertainment must have had a sense of humor. Or just liked to dance. The crowd was reserved at first, but after some suitable lubrication did manage to get into the groove. That was short-lived, however, and by the start of the third set only a handful of club members remained. One of them zeroed in on Ann, who was pretty lubricated herself. Their conversation did not go well and the masher couldn’t get the hint that his presence was not wanted. The band ended their performance, and the creep finally left Ann alone, returning to his buddies.

She was beyond tipsy, but what she lacked in diction she made up for in stridency. Her tirade silenced the conversation in the room for a moment before Eddy came over and tried to talk her down. While this little psychodrama played out Ricky and Jaylene were busy stuffing ashtrays, napkins and other serving items into Ricky’s gig bag.

But the topper of all of Ann’s shenanigans, no contest, was the night of the wet t-shirt contest.

The band had struggled for years to get a regular booking at The Music Room, one of the showcase clubs in town. They had played there a half-dozen times, good gigs, Thursday through Saturday. The management of the bar had a wavering sense of what the place should offer for entertainment and the Thursday ‘special nights’ would change from week to week. The offerings were the usual bar fare… Taco and Tequila Night, Two-for-one, and the old standard: Ladies’ Night. That last one didn’t work too well, it was really just a blue-collar drinking man’s place that had jerry-rigged a makeshift stage. The women who went there were generally following the bands. One week, however, the manager replaced Ladies’ night with a wet t-shirt contest. That brought in a different kind of crowd, both men and some special ‘ladies’. The men weren’t really interested in music, and became more belligerent as the night went on. The T-shirt contest was before the start of the third set, about 11 o’clock, and the band was instructed to play background music as a sleazy MC cajoled the ladies (who evidently did this as a regular ‘job’.) Unbeknownst to Eddy and the rest of the band, Ann had gathered a different group of women who were outside the bar, picketing with signs denouncing the exploitation of females in general and at this bar in particular. When the manager found out, and realized it was led by a girlfriend of one of the band members, he was livid. The ‘contest’ went on and the winner was the only one one who would flash the crowd. The band didn’t play there again for a year. The owner of the bar went on to make one of his servers pregnant and, when the drinking age was raised back to 21, turned the place into a rehab center, (primarily as a tax dodge), servicing the many of the same alkies that he had nurtured in his establishment.

After Ann had sobered up (and left Eddy), she went on to earn her MBA and became a ‘Fat Kitty’ herself.

I always like endings that tell me what eventually happened to the characters. It reminds me of one who, after college, was voted most likely to marry outside of his species.