One of the by-products (buy-products?) of Covid-confinement for many is an increase in interest of all things domestic—if one can’t go out in the world, have the world come into your home.

When does culture become clutter? While I’m not impervious to the siren call of possessions (and I usually make a weekly trip to various second-hand shops), I do have my limits. The image above is not that of Flippist World Headquarters, albeit the room’s overstuffed nature has some kinky appeal, I prefer my dust collectors decor contributions more humble and elegant.

The Hopi vessel below is my most recent addition; while hardly museum grade, it was made and decorated by hand, some living entity brought it into existence. Its iconography suggests Jungian archetypes, a refugee from the dream-world made real… 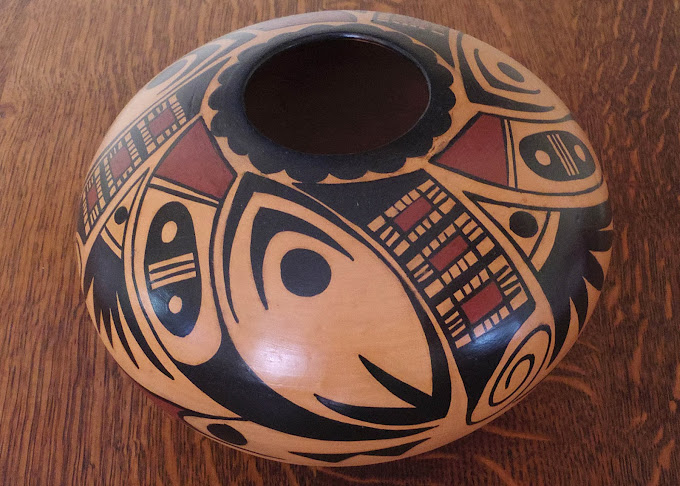 And we can all use a little extra dream-time in our decor, amirite?

A One-Hour Cultural History of Iceland 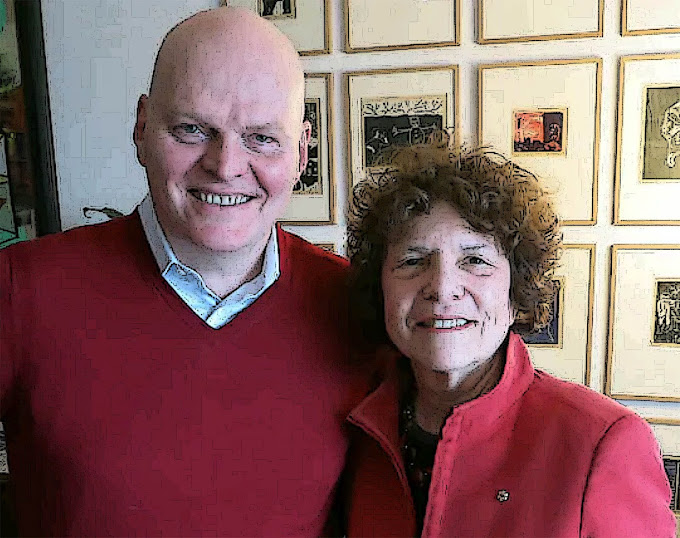 Icelandic author and artist Hallgrímur Helgason and interviewer Eleanor Wachtel discuss Iceland in general, touch upon other modern Icelandic novelists, and delve into Hallgrímur’s life and work in particular: Well worth a listen.

This is one episode of the excellent CBC radio series Darkness and Light: The Nordic Imagination. 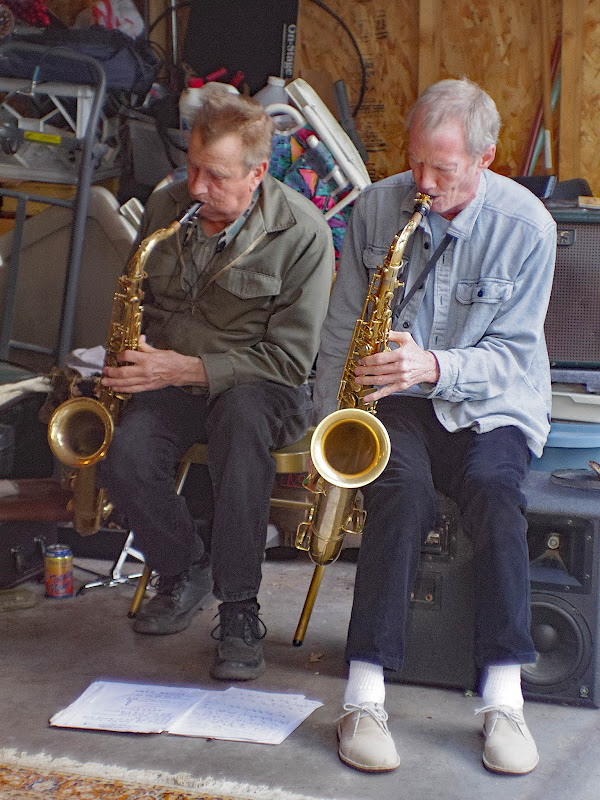 It was a pop-up concert held in a garage in Northeast Minneapolis.

Paul was in town for a wedding, he left his regular band in New York to fend for themselves for a few days. A few phone calls… some emails in the morning… by 5 PM the show was underway.

Paul was re-united with his old pal Max, it was a 50-year reunion, they met and bonded in high school. I met them both through the band I worked with, and they both became true friends—and even neighbors!

It is always great to hear them playing together: 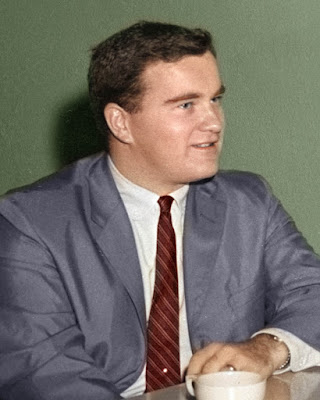 The sixties were an innovative decade of turbulent change in a wide variety of fields. None was more so than education. The “New Math” debacle was the most famous of these educational reforms, but there was also a similar movement in English instruction.

“Linguistics” replaced the traditional English curriculum in my junior high school in 1963. It was embodied by Robert Pierce’s 8th grade English class. Linguistics replaced grammar, probably not the best idea, I missed knowing it later. I do seem to remember that there was an actual textbook concerning the subject, although any of my memories of that era may be suspect—possibly altered by fumes from the alcohol-soaked “ditto” sheet hand-outs that we received. One thing I do remember clearly was Bob Pierce’s enthusiastic championing of a young folk singer who also was named Bob. He brought in Life Magazine’s piece on Dylan (April 10th, 1964) and even played us a few tracks from one of the albums. That a teacher would even be aware of a musician of the younger generation made quite an impression on me. Bob Pierce was “hip”, his formative college years were after the Korean war, not WWII, and he was well aware of The Beats other younger writers. He was one of a group of teachers who had been expressly recruited to try new things at our new school.

After I went to high school I realized just how different my junior high years were, thanks to the efforts of Bob and those other young teachers who made a real difference.

“Linguistics” remains a mystery to me, however. 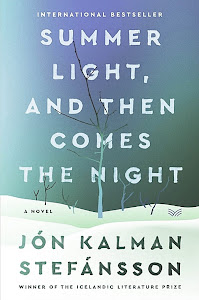 Summer Light, and Then Comes the Night

A masterpiece of literary art.

Now that those preliminaries have been dealt with, I’ll delve into some details about this wonderful book.

It takes place in a small town on the Icelandic coast, somewhere north-west of Reykjavík. The story  develops over about ten years, spanning the turn of the 21st century. There are modern innovations; the computer revolution, DVDs and other pop culture, but the people inhabiting the area remain relatively isolated—from the world at large and each other—seemingly living with a foot in the past and an inability to openly express themselves. Eight inter-twined stories examine the foibles and passions of these people, seasoned with a fair amount of parenthetical philosophy along the way. It gives the reader a broad and unflinching look at Icelandic mores and mentality. The love-affairs that thread throughout the stories portray participants who are part of a grander scheme of things that they can only dimly see and barely comprehend: the eternal struggle between love and biology is never far from the surface. At times it is very funny and, at other times, it is heart-breakingly sad. It has been filmed and is in post-production, many of Iceland’s greatest actors are in it (including Ólafur Darri Ólafsson and Kristbjörg Kjeld), if it is only half as good as the book it should be glorious.

The writing is magnificent and Roughton’s translation flows:

We speak, we write, we tell about big things and small to try to understand, try to grasp something, even the essence itself, which is, however, constantly moving away, like a rainbow. Old stories say that a man cannot behold the face of God, that doing so would destroy him; and without doubt, it’s the same for what we seek—the search itself is our purpose; the result will deprive us of it. And of course it’s the search that teaches us the words to use to describe the splendor of the stars, the silence of the fish, a smile and sadness, the end of the world and summer’s light. We do have a task, apart from kissing lips; do you know, by chance, how you say “I desire you” in Latin? And how you say it in Icelandic?

This is one of the greatest books I’ve ever read. 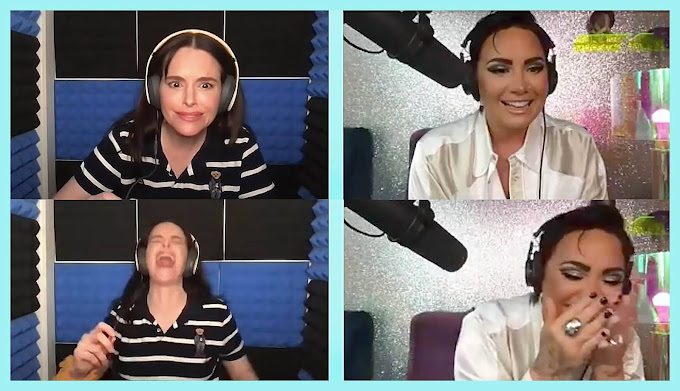 Demi Lovato is platinum-certified pop-culture icon; her roller-coaster career from Disney child actor to a successful recording star to near-fatal drug over-doser and her subsequent recovery is the stuff that bio-pics are made of. “They” (as she terms her non-binary self) is also an outspoken advocate for various expressions of gender. Demi is truly a pop star with all its baggage but, as an interviewer, they is a delight nonetheless.

Emily Hampshire is an actor (who has also been working since childhood) who has recently seen her career take off as a result of her nuanced portrayal of Stevie Budd, the sarcastic/depressed motel clerk, in the critically acclaimed sitcom Schitt’s Creek.

These two women recently got together for an interview video-cast. Watching it was a big surprise for me—actors and singers can be something of a letdown when you experience them when they are not performing and are often self-serving and vapid. This is not the case here. It is immediately apparent that their intelligence and the rapport these “besties” display is unfeigned and, as the interview progresses, it reaches heights of intimacy and emotional release that is seldom seen anywhere. Demi had even asked Emily to go out on a date! While much of the conversation centers on eating disorders and how they can affect sexual identities and self-worth, their observations are life-affirming and even hilarious at times.

Here is the interview, in its entirety. I found it to be well worth 53 minutes of my life: 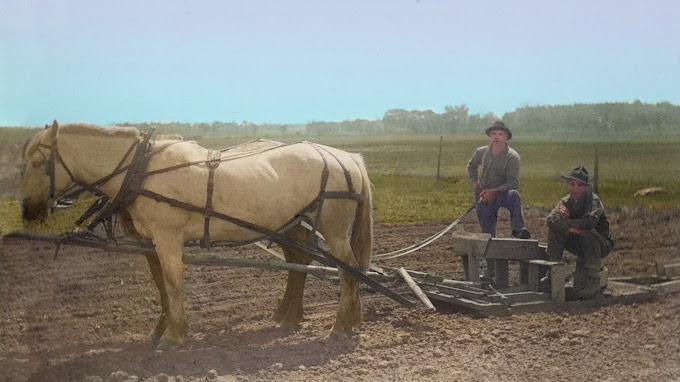 Men and their horses—Morrison County, MN, circa 1920 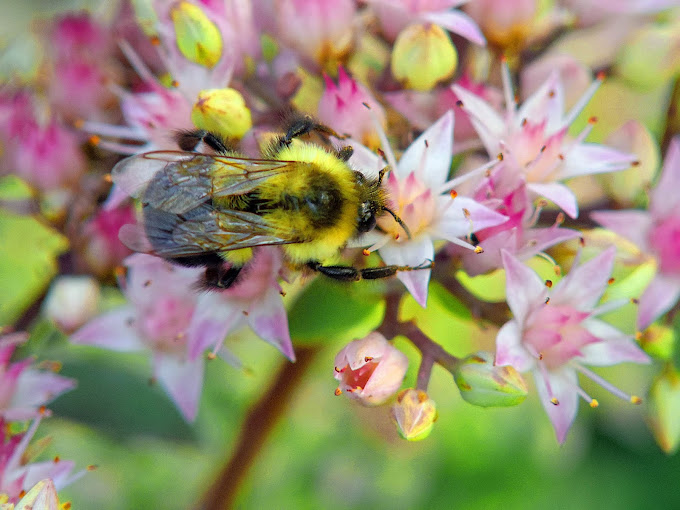 Another look at labor.

The end of summer brings a flurry of activity at the Flippist World Headquarters. Some cement repair, final paint touch-ups, composting the tomato plants and generally getting ready for what The Old Farmer’s Almanac says is going to be a long and cold winter.

I’ll let you know how that prediction pans out.

The bumble bees are still hard at work, too. They are gathering pollen while they may, steady workers who never take a break until the sun goes down: 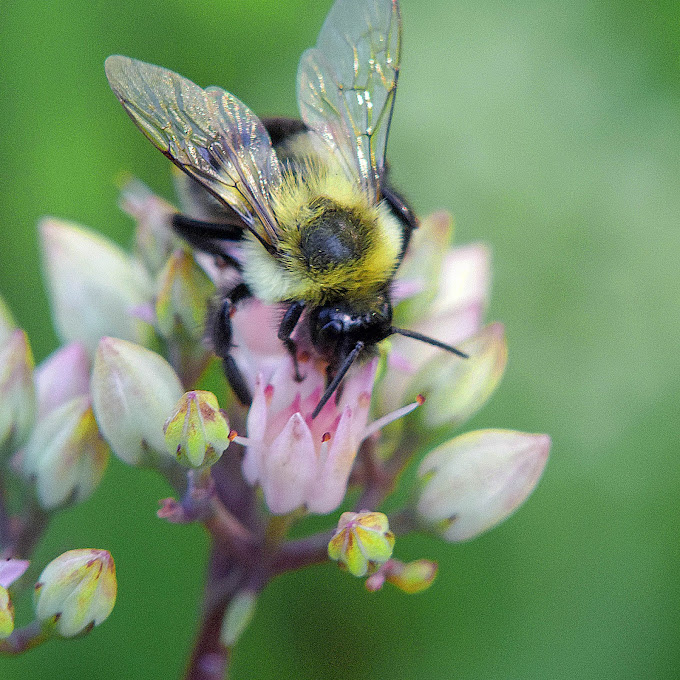 “Fairies with gossamer wings, Bring forth beauty, grace and joyful things. Fairies of the earth are caretakers of our soil, water and trees, They watch over beautiful creatures such as bears, bunnies and bees. Fairies ask that you breathe in and appreciate the vantage point from which you stand, Then trod carefully and respectfully with each intentional step you make across this beautiful land.”

A couple of images from my paternal ancestors this time, Circa 1900: 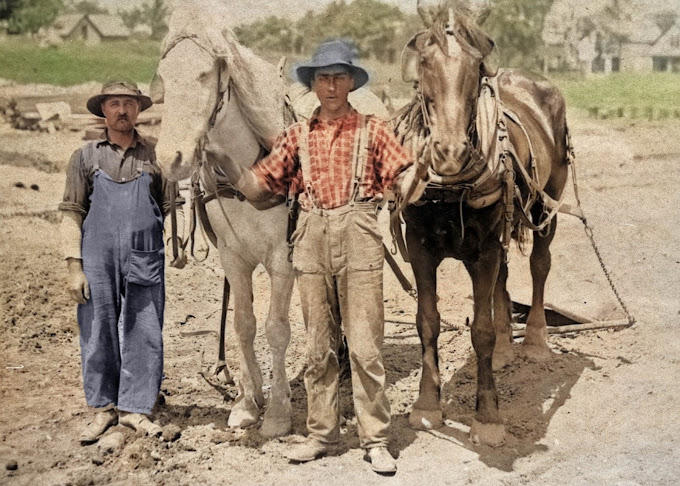 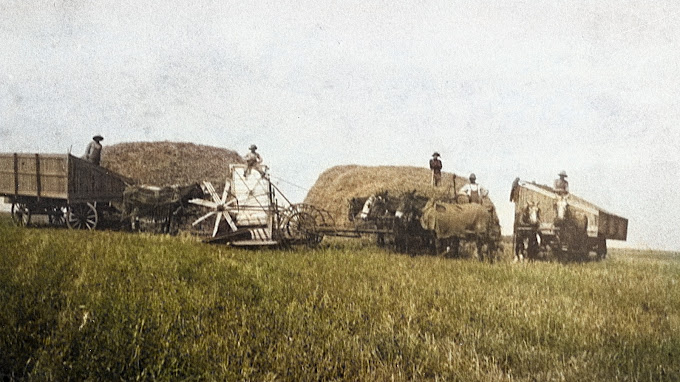 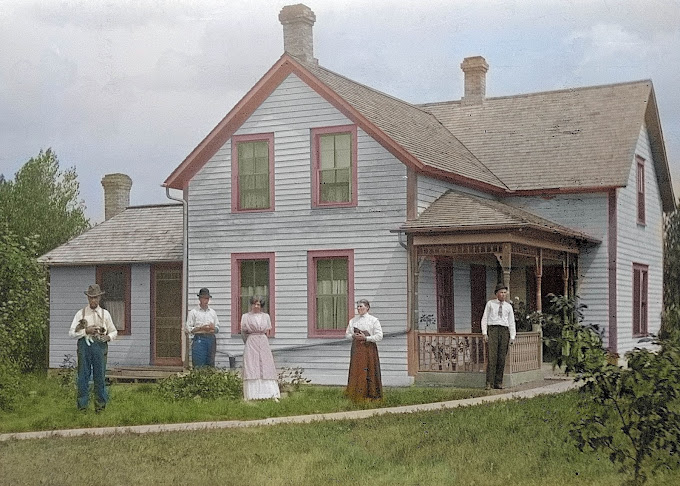 Relaxing after a hard day’s work: 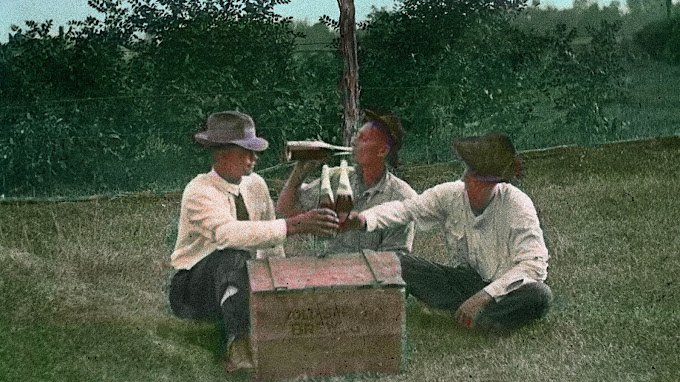 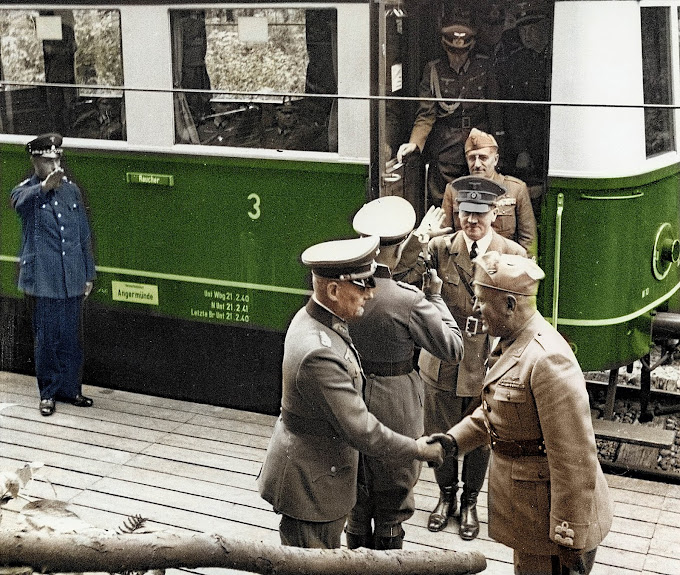 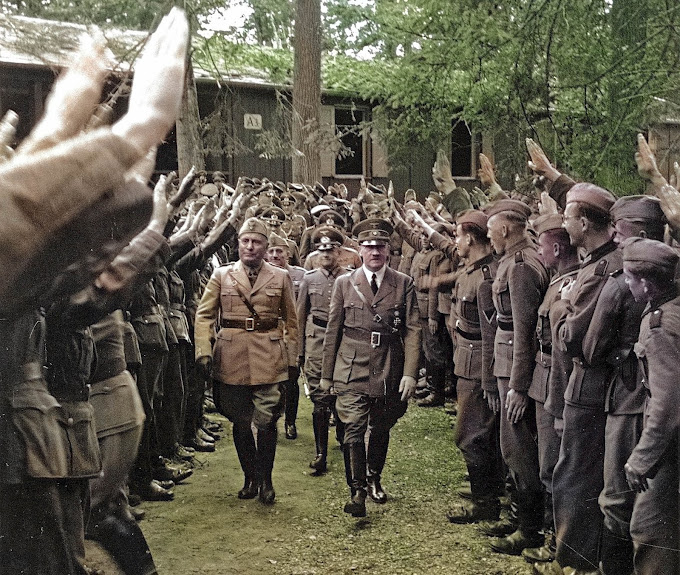 An image from the archives showed what appeared to be a memorial service.

A bier, surrounded by children (a choir, perhaps?) was flanked by officers in uniform:

But there was no religious iconography; no cleric presiding. Expanding the field of view shows some musicians are visible in the orchestra pit as well as a group of spectators reacting in unison. Still no obvious clue as to the denomination: 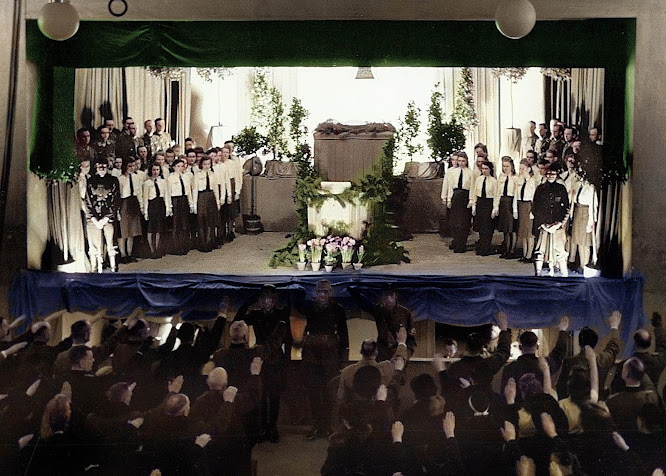 Pulling back further adds another dimension to the tableaux, and the mystery is resolved: 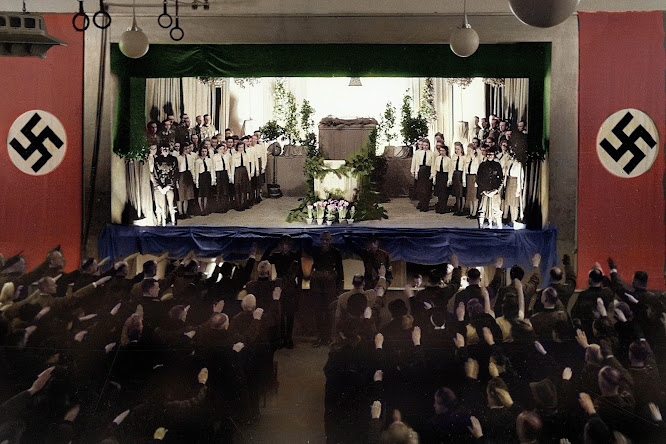