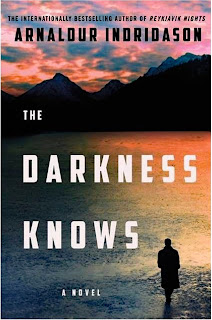 A novel by Arnaldur Indriðason
Translated by Victoria Cribb

It has been a few years since there have been any new English translations of novels by Arnaldur Indriðason. Arnaldur is best known for his 14 Detective Inspector Erlendur novels, he has been writing and publishing in Icelandic regularly but I suspect that the recent explosion of translated Icelandic novels has caused a backlog (this book was first published in 2017 and is just now available in English.) When Arnaldur started his career (in the late 1990s), he was one of only a handful of Icelandic writers being translated into English. Now there are dozens of quality books by Icelandic authors making the ‘leap across the pond’ every year—truly an embarrassment of riches. The golden age of Icelandic literature is NOW.

The Darkness Knows is the first novel in a series featuring Konráð, a retired Reykjavík police detective. The story begins when a tour group discovers a body frozen in a glacier. The body belonged to a man who went missing thirty years previously and the chief suspect in his disappearance (who had never been charged) had become close to Konráð, uncomfortably so, and so asks to see Konráð after he is re-arrested. Konráð meets with the man, who protests his innocence but in such a way that there remains doubt about his story. There are also sub-plots concerning a victim of a hit-and-run accident and Konráð’s relationship with his father (who was a minor criminal and conman) who had died when Konráð was a teen. I suspect that relationship will be more fully developed in the later books (there are already three more that have yet to be translated.) Konráð, a widower, is a melancholy figure (but not nearly as cranky as the Erlendur character was in that previous series) but has a much darker backstory,  which I also assume will also be explored in future books. The writing, as is usually the case with Indriðason, is terse and direct, making the somewhat complex story line easier to follow and, if you are familiar with Reykjavík, the description of the story’s settings add color to the story. The plot is logical, but still manages to take a sharp turn or two. I found the ending to be surprisingly touching. One of the joys of following Indriðason’s novels is the ‘slow burn’ of character development over the series. This augurs well for the remaining titles—or it just might be that I find a perverse pleasure (self-identification?) in reading about idle pensioners. Konráð is the antithesis of a television action-detective.

Victoria Cribb’s translations, after a shaky beginning, have become faultless—she is now one of the best in doing Icelandic to English.