This is chapter 5 of Window Weather, a serial fiction novel on FITK 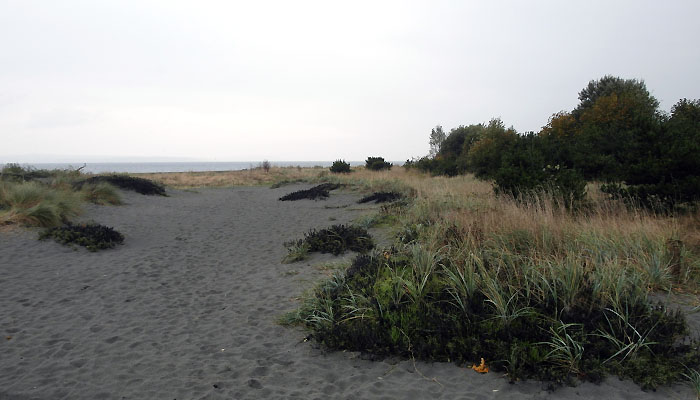 Yes, Molly certainly had. Sean found that getting a synchronized day off with her was becoming harder and harder. Their life together had started out on a whim and a prayer but now they were both working so much that any moments of joy they shared seemed as if they had been stolen. Molly was generally tolerant of Sean’s long hours but she had her limits. Seattle’s beaches were far from tropical but they shared the same ocean and, in the off-season, were mostly free from hassles.

“OK! I’ll tell you what we’ll do,” said Sean, “We can make up a picnic basket and toss in a bottle of Columbia Valley red: Velvety Washington vino, crackers and some fine Tillamook cheese and voilá! Romance will be ours.”

Sean really did want to reconnect with Molly, if only to see where their relationship stood. It didn’t help that Molly’s job had gone into overdrive at just about the same time as his had. Sean usually started work early. His east coast connections were three hours ahead of Pacific time. Molly started later, sometimes taking dinner in the office, often getting home after Sean was in bed. Usually, they worked Saturdays as well. Sundays were spent trying catch up on sleep.

In the car on the way to the beach, Molly was quiet. Finally, she spoke:

“Sean, will we ever have a regular life someday? I mean, at some time in the future, when it’s not so crazy, we’ll have something we can build together and not just see each in passing... in and out the door... you know... we could be more like regular people, with nights together and weekends in the country? Does that sound too needy? I’m saying this because I fell that we’ve been drifting away from each other.”

Sean had felt it too. What is the glue that keeps couples together? Shared life experiences, kids, a sense of purpose, Love? But the incontrovertible fact remained that Sean was a spook. At times, he felt as if he had been reduced to a pile of ciphers—a jumble of fragmented code.

“I know what you’re saying,” Sean said, “Why is our life so hard? Nothing is simple anymore. Let’s make some time, time like this, at least one day per week, and two days a week when my big job is done.”

“I’d like that,” Molly said, “We’ll be through our reorganization at the agency by then and maybe, just maybe, we’ll be able to make it right.”

Molly smiled as she got out of the car, the first real smile Sean had seen from her all day. It was hazy out over the ocean but the sun was trying to break through. They had walked out along the shore a few hundred yards when Molly said: “Stop Here.” She spread out a blanket between some relatively secluded shrubs. As Sean poured the wine, Molly looked out at the bay and began to speak softly, almost as if she were telling a secret:

“When I was little, my Mother used to take me here when she wanted to be away from my father. At the time, I didn’t understand why. I loved to run up and down the beach. Mom would sit and read, right here, right where we’re sitting. When I got tired, she would make up a little bed in the sand and cover it with half the blanket and I would lie down. Then she would put the other half of the blanket on top of me. I would nap for a little while, then she would wake me and we would go back home. Dad would be gone by that time. We’d eat dinner and then watch TV. I’d take a bath and then I would go to my regular bed. I would think that it had been a very good day. When Dad was around it was never a good day.”

“Your Mom wasn’t really fat, was she?” asked Sean, “And the pictures you have shown me—when you were young—you weren’t fat in them either.”

“I don’t know why he said those things. Somehow—I didn’t understand why—I felt that I had ‘wrecked things’ for him and my Mom by my being born. He comments about my weight didn’t help either. It really messed me up. Lots of gorging and purging. I didn’t start eating right until after I was out of college.”

“How were you able to change?”

“It happened suddenly, it was when my father was dying. He was lying in the hospice bed and was still trying to fuck with my head. He was pathetic. I knew then that I had to be my own person. And I still am.”

Molly had never spoken this way about her father, or herself for that matter, before. They ate and drank in silence for a while. Finally, Sean spoke:

“Does being in this place bother you now?”

She paused for a moment and then said, “This is our place now, the past is gone. This day is ours, and the night will be too.”