This is chapter 6 of Window Weather, a serial fiction novel on FITK 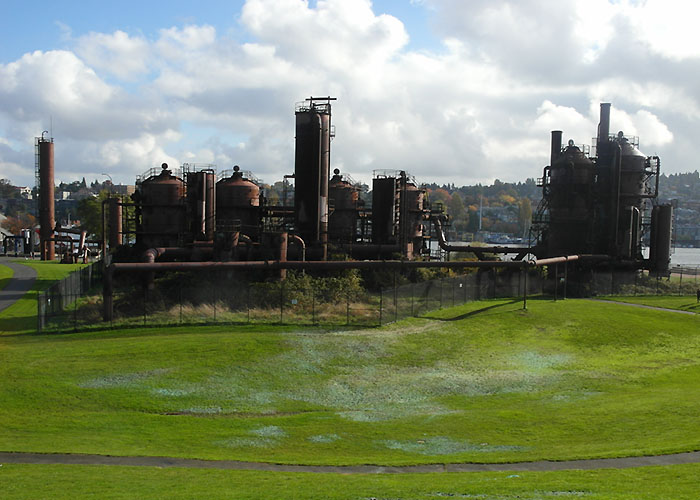 “Let’s take our lunch out at the Gasworks park.”

Mrs. Robinson was not the sort of person to ‘do lunch.’ Her socialization always had a hidden motivation. The fact that she was Sean’s boss made it obvious to him that this occasion was to be more than an excuse to get out of the office. The old gasworks were a good place to talk: wide open spaces and several large masses of ferrous material to inhibit electronic eavesdropping. Sean knew that Mrs. Robinson was also intimately involved with the Billy Clarkson case, if for no other reason than the fact that the searches were starting to get expensive. She always monitored the cash flow.

“It’s a beautiful day,” Sean replied. They were standing in front of the elevator in ADR’s office suite. At ADR, any conversation in a common area of the building was always held in the most innocuous terms and, although they were generally trustworthy, the class of people ADR employed weren’t above bugging their co-workers. Sean and Mrs. Robinson drove to the park in silence as usual. It was easier than sweeping the car for eavesdropping devices. In this business ‘normal’ precautions were considered reckless; ‘paranoid’ precautions were the norm.

As they walked up the hill overlooking the old refinery the translucent red frame of Mrs. Robinson’s glasses became back-lit, as did her nappy hair. For a moment, it looked as if her head was on fire. Sean held his tongue. She was the kind of woman who always aware of how good she looked but wasn’t shy in cutting down a reckless flatterer. In the office, she was always referred to as Mrs. Robinson. Due to the nature of their work the staff was discouraged from becoming too personal. If there was a Mr. Robinson, or if that was even her real name at all, was nobody’s business. Sean felt a sudden surge of desire, a surge which he quickly extinguished.

“Let’s recap the Clarkson case,” began Mrs. R, “We’ve got Billy’s general location. He bought a laptop with his credit card and we’ve tracked its CPU’s identifier and found that he’s been using it from time to time on various Wi-Fi networks. The main reason the Senator’s people haven’t been able to find him is that these networks are all in Iceland. Relations between the US and Iceland have been strained for a long time—at least since the start of the Iraq invasion. Three F.B.I. agents who flew into Reykjavík to investigate an Icelandic Wikileaks connection last year weren’t even allowed into the country! Have you found anything in those old college files of Billy’s?”

“Yes, a bunch of old e-mails, mostly to and from girlfriends, and a list of bookmarks. We’ve been checking them, many of them are dead links, but several were in the Internet Archive Wayback Machine,” said Sean, “I’ve been looking at those sites he used to visit and it’s starting to make some sense to me now.”

“How so?” The glint in Mrs. Robinson’s eyes took on a feral intensity.

“The sites were all blogs. And they were all by Icelandic women.”

“Women… Huh,” She paused and her eyes met Sean’s for a split second, “You are about to pay your old college chum a visit. I’d pack a sweater if I were you. There is a flight to Iceland Friday. You’ll be on it. When you get there take the Shuttle bus to the Hotel Borg. Here’s a map of the central city. The apartment you will actually be staying at is a few blocks away. If anyone asks, tell them your visit is part of a ‘Scandinavian Studies Program.’ Find Billy, see what he is up to, keep me informed. If you find yourself in deep trouble, go to the American Embassy and tell the guard the word on this card—but only use it as a last resort. I’d prefer it that we didn’t get directly involved with the US government. They can’t be trusted.”

The word on the card was in Icelandic: gluggaveður.


“Look, I know that your work may be all hush-hush, but you just can’t announce that you are ‘going away’ somewhere,” said Molly, “For ‘awhile’... you just can’t treat me that way!”

Sean knew that this would be bad. Telling Molly that he would be leaving the next day, for parts unnamed, for an indeterminate time, for an unknown job… he could understand her anger. They were sitting in a Thai restaurant in Seattle’s U district; it was her favorite place to eat.

“It can’t be helped. I can’t explain why or where, but it’s very important, not just for me but also for your own well-being. You must not know anything about this project.”

Molly glared at Sean in a way he had never seen before.

“Look,” continued Molly, “If you want to split, just tell me. You don’t even have to give me a reason. I’ve been dumped before, but never in a way like this,” Molly hissed the last line and was beginning to tear up a bit.

“Molly... ” Sean was getting the feeling that anything he said now would only make it worse, “Listen to me,” Molly turned her head down and began poking at her Phad Pik Khing, “I’ll email you every day. It won’t be forever. I’ll come back.”

“Promise? As if that would matter.”

“We’ll make it through this, don’t give up on me, Molly.”

Suddenly, Molly regained her composure. She looked at Sean very closely and for a long time. A small smile appeared at the corners of her mouth.

“I’ll be at work. I trust you can manage it by yourself. Just make sure that you come back,” said Molly. She wasn’t smiling.