The Water Has Memory

This is chapter 14 of Window Weather, a serial fiction novel on FITK 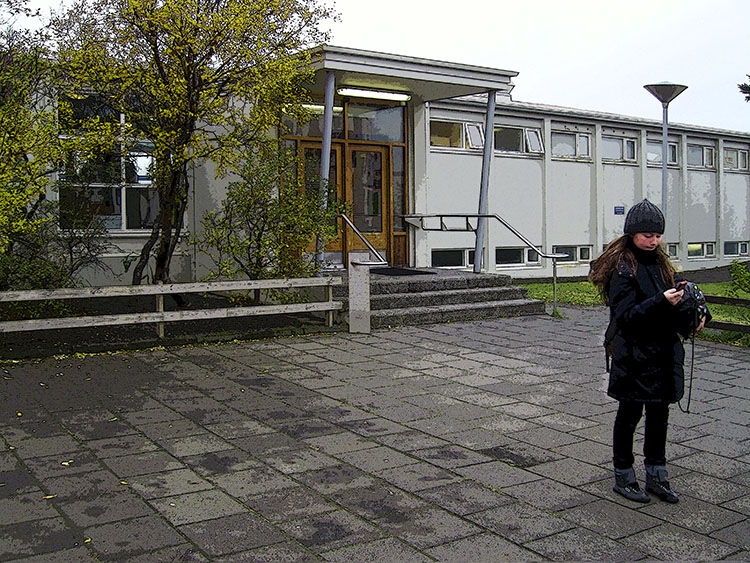 Sean woke up with a headache. It was a little past noon—5 a.m. Seattle time—and once he figured out where he was and what he had done the night before he knew why he felt so strung out. He remembered what the man on the shuttle bus had told him about the swimming pools in Reykjavík. A brochure on the table next to his bed gave the locations. Sean had several hours to kill before his meeting with Billy and he thought that a swim and a soak would do him good. His mind was still on the emails from Molly and Mrs. Robinson, he was especially concerned with Molly’s comment about ‘the guy sitting in the car.’ In his reply, Sean told her to get a picture of the guy and his car—if she could do it without being too obvious. Mrs. Robinson’s email concerning the Russians was also troubling. After the events of last night, Sean knew here was definitely something going on with Billy and them. Grabbing a banana as his breakfast, Sean headed out.

The walk to the pool was stimulating. Almost every house or apartment that Sean passed had some form of artwork prominently displayed in their windows, Sean found himself smiling in spite of his anxieties.

Situated in a residential area about a mile from the apartment, the pool complex was  built of concrete in a post-war Euro-Modern style. After paying for an admission, the desk clerk steered Sean toward the flight of stairs that lead down to the men’s changing area. It was a nice place—tastefully furnished in wood and tile—and surprisingly bright for a locker room. A group of older men (evidently regulars) were talking among themselves in the area adjacent to the shower. Sean realized that the pool was as much a community center as it was a place to swim. Everyone was naked. Sean dutifully scrubbed and showered as per the instructions of the imperative graphic that was prominently displayed on the wall. He put on his suit and walked outside to the pool area. The air was quite cool but once in the water, Sean was deliciously warm.

A swimming lane was open and Sean managed a couple of laps. He then got out and walked over to the hot pots. The water in the first pot was warmer than that of the pool, but Sean wanted something hotter—hot enough to erase any jetlag that remained. In the next pot, which was a couple of degrees warmer, were three people: an elderly man and woman and a heavy-set, olive-skinned younger man.

Sean replied, “Good day to you, too.”

“Æ, an American, yes, and what brings you to our little pool at the end of the world?”

“Where are you from in America?” said the younger man, who spoke with a slight Spanish accent.

“From Seattle, most recently, but I’ve lived in a couple of places in the States. You must have come from somewhere else as well?”

“I am from Madrid, here on business.”

The woman smiled and nodded and the man spoke: “Yes, I’ve been here all my life, except when I was out fishing. I’ve been to Seattle too, but it was many years ago.”

“I’ve only lived there a few months,” Sean replied, trying not to reveal too much.

“I’ve fished all around the world,” said the older man, “I even went to Japan to study their fishing methods. I learned their way of casting nets. I was able to catch more fish and use less fuel than any of the other Icelandic trawler captains.”

“Do you still get out on the ocean?”

“An admirable philosophy, my friend,” said the man who was entering the hot pot, “You know, it so happens that the only philosophy I truly believe in concerns water as well.” It was the same man Sean that had spoken with on the Flybus.

“Welcome professor... Shallbetter, I believe it is?” said Sean,  “Join in, we’re conducting an international symposium on all things important. Tell us your philosophy of water.”

“Simply put: water is good. I know it isn’t much of a theory. You don’t have to believe in it either—unless you are thirsty.” All the people in the pool laughed. The professor continued:  “It isn’t really my theory. I borrowed it from Halldór Laxness.”

“I should know who that is, I think,” said Sean, “But I have a feeling that my college computer science classes were somewhat deficient in their coverage of Scandinavian philosophers.”

“He was the greatest Icelandic author of the twentieth century, a Nobel laureate and Socialist-Catholic-Taoist,” said Shallbetter.  “As a philosopher, you would be hard-pressed to find one who was a better commentator on the human condition.”

“Fascists… ” he declared, with an emphasis on the sibilance of the ‘s’ sounds, “… an inevitable result of unbridled political power. American politics is heading toward a fascist state.”

The professor spoke up: “I am afraid you are right, my friend. The president has embraced it, and his main challenger, Senator Clarkson, is only the flip side of the same coin. Either one will use as much force as possible to maintain their hold on power.”

Things were beginning to heat up in Sean’s little hot pot at the end of the world.

Sean decided against revealing that he was working for Clarkson—not that he was in a direct political sense—but in the support of him nonetheless. It was really just another job, as far as Sean was concerned, except for his connection with Billy.

Addressing the retired Captain, Sean asked: “What about the Icelandic president? What are his aspirations?”

“Well, it is not the same here. The president is a figurehead—a suit and tie—trotted out to greet foreign dignitaries. He likes to pose with the big-shots, I think he really wants to be Icelandic royalty, like the King of Norway or the Queen of Denmark. King of Iceland, huh, he would be the new ‘Dog-Days King.’”

Another woman, who appeared to be in her mid-thirties, entered the hot-pot and began talking in Icelandic to the older woman. When the sun suddenly broke through the overcast, the conversation stopped. Sean squinted and, as the sun filtered through his eyelids spreading a warm, red glow over his field of vision, his whole body felt as if it were dissolving into in the hot water. Sean thought it would be a good time to take his leave—before he melted.

“Well, I am quite thoroughly cooked. It was a pleasure talking to all of you, and to meet you again Professor. What is the name of that author again?”

“Laxness. Halldór Laxness. He wasn’t a fascist, although he did support Stalin for a good while. Read his books, any of them, you can get them in the airport shops. He’ll set you straight.”

“Can you tell me what, besides water, is the gist of his philosophy?”

“Oh, there is so much I wouldn’t know where to begin. Hm. This will have to do:

“It’s from World Light. Remember it.”

Next Chapter: The Pearl