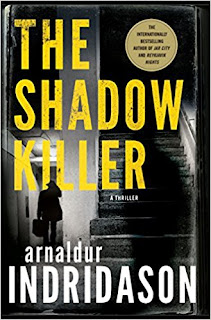 A thriller
By Arnaldur Indriðason
Minotaur, 2018

This is the second book in Indriðason’s wartime Flóvent/Thorson series, although it takes place a couple of years before the previous one, The Shadow District.  Set in Reykjavík during World War II and the change from British to American occupation, this atmospheric novel captures that brief time vividly—in both its place descriptions and characters. The plot revolves an execution-style murder of a hapless traveling salesman, a man who is slowly revealed to have been an unwitting part of a much larger scheme involving Nazi sympathizers, German spies, and a secret “scientific” project that took place in his childhood. The story is realistic, the characters are believable, and the story comes to a satisfactory conclusion, and, after my recent diet of modern mysteries, it was refreshing to read a story where the only personal electronic device is a hard-wired telephone.

This is a very good mystery, although Flóvent and Thorson, the two detectives, are not as fully developed as Erlendur was in Indriðason’s other series. Written in a restrained style, with realistic characters and situations, it is a solid entry and worthy of a look.