This is Chapter 21 of The Inheritance, a serial fiction novel on FITK 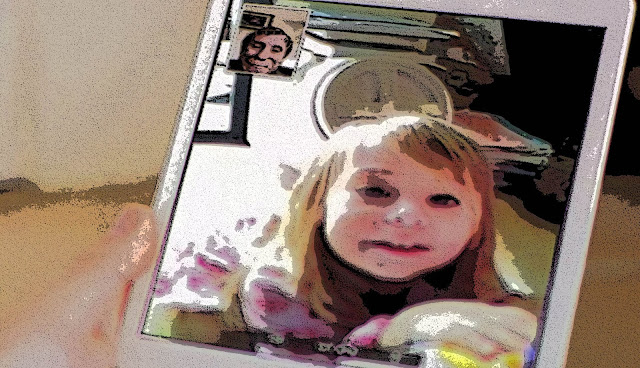 Vilhjalmur’s cry when the FaceTime link was established was like a dagger plunged in the heart of Sean. The only regret Sean had about fathering the boy was that he couldn’t be with him enough. Now, with the Covid-19 restrictions on travel, he missed him more than ever. It had been a year since he had been in Iceland to be with him, and it looked as if it might be another year, or longer, until he could return. There were ways to get into Iceland but none that didn’t involve days of quarantine and/or flights from outside the US, all direct flights from Seattle were canceled and the ones out of Boston were few. Mareka also missed her half-brother, they were very close when little and still had a special bond. Sean knew that it would be even harder to arrange a flight for a child.

“Hæ,hæ. Villí,” said Sean, trying to be as composed as possible, “What’s new?”

“Oh Pabbí, I swam two laps in my swimming lessons! I’m learning about big cats in school, and I am going to sing með tvö stelpur at Fríkirkjan next month.”

Villí’s mix of Icelandic and English meant that Sean always kept his laptop open to a translation page whenever he FaceTimed on his iPad with his son.

“With two girls! Oh how I wish I could be there,” said Sean, “Þora will do a video, I hope.” Þora was Villí’s mother; she and Sean had gotten together in Reykjavík eleven years earlier, during the ‘Billygate’ affair. After that rocky beginning, Sean and Þora had made the best of the situation and, with the help of Þora’s uncle Hilmar, Sean had done whatever he could to help raise the boy, including living in Iceland for extended periods with Mary and Mareka. Sean and Villí talked for several minutes, with Villí showing his father his latest artwork. “Would you like to talk to your sister?” asked Sean before he handed the iPad to Mareka.

After that ‘formal’ greeting, the two children were off on an extended conversation, Mareka telling her brother all about her adventures of the previous two weeks, with special attention to ‘Ms Bright Eyes’, the backyard raccoon. Villí had some trouble figuring out exactly what a raccoon was, and why there was a wild animal living in her yard. The talking part didn’t seem to bother him. When the two had finished talking, Sean asked to talk to Þora before they disconnected. When Þora came on the screen Sean was shocked at her appearance. She looked as if he had been crying. He knew that the Covid crisis had been hard on her—she had lost her job in the tourist industry-literally overnight. Some tourists were now starting to come again, mostly from the Schengen Area, but the number was only a small fraction of previous years.

“Email me, tell me everything that is going on,” said Sean, “You know that I will do anything I can, anything in my power for you and Villí.”

“Já, I will. I feel like I’m loosing the thread sometimes,” she said, “We miss you and Mareka, and Mary, she is like a sister to me.”

“We’ll continue to monitor the travel situation, a lot depends on how big the Covid rebound is. We’d love to come, or have you come here, we have a lot of room in the new house.”


Seattle’s TV station KWAH had seen better days. William Preston, its news director, had felt somewhat put upon by staffing cuts and he resented having to do grunt-work, things that used to be handled by flunkies and interns. That was why he had spent Saturday in the station looking at footage from the ‘witch riot.’ He had found Jo Sanford in his search but she was only in the background and, toward the end, standing on the bench of a bus stop across the street. He didn’t have any footage with Sean or Mary in it. A dead end or, what was more likely, a diversion and irrelevant to any real story. Preston couldn’t care less that Sean had been two-timing Mary, but he could make stretch the story to fill a couple of minutes on Monday’s newscast. Nobody had seen Mary or Mareka in Seattle after their return, and the only sighting of Sean and Jo was at the riot, no one had seen either of them since.

The story wasn’t dead yet.

Barbara Merrit, against her better judgement, had agreed to meet Marcel DuPage again. She sensed that he had always been a ladies man, and that he had more than an idle interest in her. Seven years ago, when he met the mystery woman who had been to a dance with Sean and Mary, he may have been appealing, but now that he was older he was just creepy. Still, he had been the perfect gentleman and he just might know more about Sean and Mary than he was letting on. She had been waiting at the Paccar Pavilion in the Olympic Sculpture Park. He was late and Barbara got the impression that he liked to make a dramatic entrance.

“Ciao, bella!” said Marcel, as he breathlessly swept into the empty seat across from Barbara, “A beautiful day and a beautiful woman,” he continued, “I hope my not wearing a mask doesn’t disturb you. At least we are six feet away for each other.”

When they had previously met they were mask-less, at a bench in a nearly empty park, but most of the well-spaced crowd in the Paccar were wearing masks. Barbara took off hers.

“I choose this table because it is the most remote and not near the doors,” she said, “We should be alright. What have you got for me today?”

Marcel may have been six feet distant but Barbara could still smell his cologne. She saw herself becoming attracted to him, in a weird kind of way, before thinking; “He may have gotten involved with someone twice his age, but I’m not going to,” and then she laughed at herself even considering the notion.

“I’ve been looking at those pictures you sent me. There are some of Sean and Mary from Halloween, a few weeks later, it looks like they are in a park at night, there is a bonfire. File names IMG8732 through IMG8802.”

Barbara opened her iPad and found the files. She hadn’t noticed them before, they were available light shots and quite dim.

“File IMG8766,” said Marcel, opening his iPad, “I processed it in Photoshop and brought out some details.”

Marcel had massaged a nearly black image into a clear photo of Mary, Sean and ‘Emily’, Emily in a novelty witch costume. There was another woman in what also appeared to be a witch get-up, but her clothes were old, museum-grade, obviously antique. The face of the woman was still dark, however.

“One more adjustment,” said Marcel as he slid to the next image, “The mystery deepens.”

Marcel had enlarged the mystery woman’s face and done some more processing to bring out the features. It was very grainy, but what it portrayed was unmistakable. It was not a mask, but a real, three dimensional object.

What Marcel had coaxed from the shadows of the murky image was a human skull.