This is chapter 34 of The Inheritance, a serial fiction novel on FITK 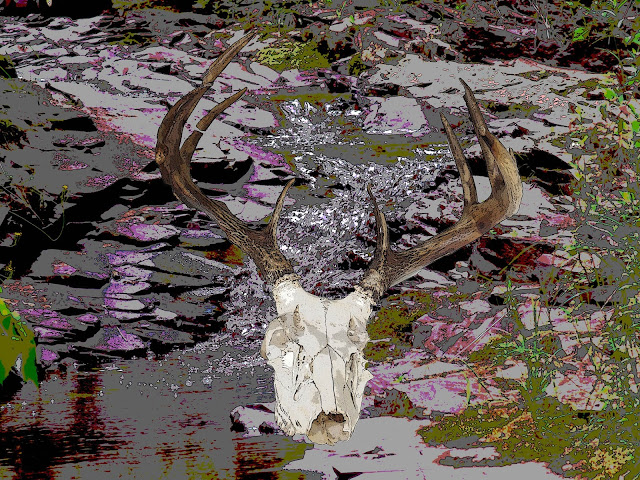 With dinner completed, Sean, Mary, Mareka and Jo resumed their evaluations of Sean’s grandmother Emily’s art. Having already gone through the sketchbooks and drawings, the group turned its attention to the ‘spirit paintings’. Sean had set up an easel with soft light shining upon it to bring out the detail.

“Emily told me that she used the making of these paintings as a way to deal with the inner worlds that she she would visit,” said Sean, “She also said that they would be different each time, that there was no theme to them. In light of that, it seems to me that the best way to judge them would be on our first impressions. I’ll record what we say, if that’s OK with everyone?” With nods of affirmation all around, Sean unwrapped the pile.

“This is like a dream,” said Mareka after Sean had put up the first one, “I’m liking it.”

“I can’t compare it to anything I’ve ever seen before,” said Jo, “How are we going to be able to choose?”

Sean proceeded to go through the paintings: some were chosen to go in the ‘best’ pile, an equal number made the ‘look at again’ stack, but most were put aside. When he came to a painting that featured a stylized deer skull with antlers Mareka said: “Stop!”

The adults turned to look at the child. Mareka sat very still with her mouth and eyes wide open. She shuddered and then began to speak in a monotone voice:

“I have been with you since the dawn of time in the misty birth of life on earth, the rise and fall of the oceans and continents, of creatures great and small, through eons of swamps and centuries of ice. You seek me out now, now that the world is in turmoil and the horsemen of the apocalypse ride again. I will show you many signs and wonders, the creatures of the seas, earth and sky will join the enlightened in response to the injustices of the oppressors.”

It was now the time for the adults to open their eyes and mouth wide. Mareka shuddered once more before transforming back into the child they knew.

“Something happened, didn’t it?” said the child, smiling, “I feel good.”


Barbara Merrit re-checked the address of the restaurant that the anonymous caller had given her. It was north of downtown, out on Lake City Way, in a part of Seattle that she was unfamiliar with. The caller had told her that he had some ‘interesting’ information on Sean Carroll, some information that she would find very useful for her book.

“It can’t be any worst than dealing with that DuPage lunatic,” she thought as she drove up to the designated rendezvous point, “And that worked out.”

The Khorosho Tavern had widely-spaced sidewalk tables under a canopy that flanked its doorway. Barbara donned her mask, left her car and walked up to the ‘Wait Here For Service’ sign. A masked woman came out of the restaurant and asked if she had a reservation.

Barbara wished that she could sit outdoors. Her level of apprehension began to climb as she followed the host through the dark restaurant. While the bar stools had been removed and there were plexiglass shields in place on the bar, the restaurant itself seemed normal enough except for the ropes that blocked access to every other booth. Her level of alarm ratcheted higher when the woman indicated that she was to go through a doorway at the end of a dark hallway in the rear of the establishment.

“Your party is waiting inside.”

If the restaurant was dark, this room was almost pitch-black with a cheesy LED tealight as the only illumination. Her would-be dinner partner was wearing a black mask and sat on the far side of the table.  A drink menu on a stand further diminished the feeble lamp’s output in the man’s direction.

“Please, sit down,” said the shadowy figure. His speech was precise, as if he were overcompensating his enunciation in an attempt to hide his accent, “May I get you a drink?”

“Attract more flies with honey than vinegar,” thought Barbara, “Of course. A dirty martini. Made with vodka, of course.”

“Of course. Excellent choice, Nadia will get that for Ms Merrit, and a vodka for me—neat—if you would be so kind.”

Barbara hadn’t noticed that a server had come in behind her. Barbara made an attempt to speak, but was hushed. “We drink first, then talk,” said the man. As Barbara’s eyes adjusted to the gloom, she could see that the man had an impressive physique, she thought he might be a weightlifter. His hair was black and wavy and his eyes revealed nothing. They sat in silence until the drinks came.

“Будем здоровы!” said the man as he raised his glass.

“Cheers!” Barbara replied as she held her glass aloft.

They drank, the man downed his in a gulp while Barbara sipped hers at first and then, finding it delicious, quickly drank the rest down.

“Indeed. He and his wife have been getting away with murder, to put it bluntly.”

“We have been watching Mr. Carroll for many years,” replied the man, “Perhaps murder is not the right word, but it does seem as if death follows him.”

Barbara began to feel drowsy. She tried to form a question but the words wouldn’t come.

The man got up, picked up Barbara’s purse and went to the door.

“Sergey,” he said and was immediately joined by a large man dressed in black, “Here are her keys, her car is in front, find it with the fob. Drive it around to the back door and then come in and help me put her in.”

A few minutes later the back door opened and Sergey came in. They carried the unconscious Barbara to the vehicle.

“Put her down in the back,” said the man, “Ms Merrit is going for a little ride.”


Next chapter: The Morning After