This is chapter 38 of The Inheritance, a serial fiction novel on FITK 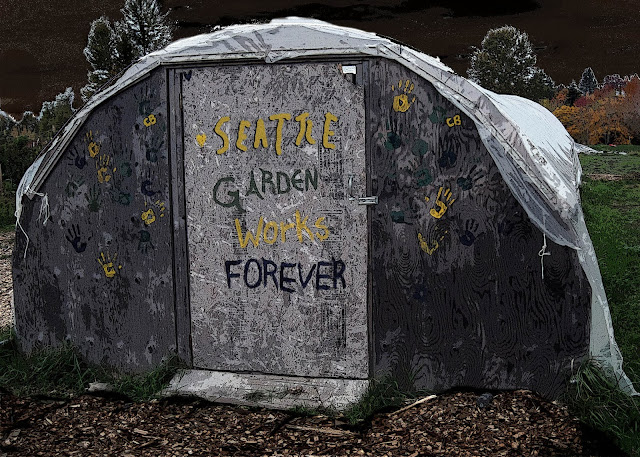 He had been given them by the Seattle PD’s crime watch task force. The neighbors had been complaining for months about suspicious activity centered around the tavern. The task force convinced the health department to shut the tavern down for Covid violations but the activity had continued so cameras had been installed facing the front and back of the building. What had caught Marchal’s eye was the visit a week earlier by Barbara Merrit and an unknown male. Merrit had been a person of interest concerning her role in the witch riots of the previous summer but until now there hadn’t been a solid link with her and the Russians.

Marchal thought that it was high time that the two of them had a little chat before she found herself in over her head.


Sergey Limonov was sitting in his car, waiting for Barbara Merrit to take her dog for its nightly walk. She lived near the Center for Urban Horticulture, an annex to the University that had garden plots for students and youth groups situated along its paths. Sergey had been instructed to ‘neutralize’ her. Her misguided efforts in trying to find some covert plot by Sean and Mary were getting too close to the cell that Sergey was in. With the possible exception of her dog, as a ‘hit’ Barbara posed no problem to Sergey. Animals were always an unknown factor in any situation, their reactions could be unpredictable. He had a poison-dart gun for the dog. For Barbara, he had the inhaler.

He had been tracking her movements for several days now; her ritual with the dog was the one constant. Sunset was at 7:30 tonight—just about the same time that Barbara and her dog would be in the most remote part of the park. The smoke from nearby forest fires would also help to ensure that no one would see him. There was a crude solar green house there that evidently had not been used this year. He had removed its padlock and replaced it with one of his own. It would be a perfect place to ditch her body. He had prepared a shallow grave and there was already a pile of mulch in the structure. With any luck her body might not be discovered until spring—when he would be lying on the beach in Sochi.

Sergey saw Barbara and her dog cross the street and enter the park complex. He waited a couple of minutes, and then left his car and entered the park from a different entrance.


Sean was reading to Mareka from a book of Icelandic folk tales.

“… And so ends the story of Thorgeir's Bull,” said Sean, “And now time to go to sleep.”

The ‘just one more game’ was a thing Mareka had done many times with her father. Her request nudged Sean’s consciousness into a different plane. He knew that there wouldn’t be many more of these sessions, Mareka was already reading well past her age group; she wouldn’t be a ‘little kid’ very much longer and this routine was one of the last remnants of her early years.

“Pops? Anybody there?” queried the girl after Sean failed to answer.

“I’m sorry honey. I was thinking about Iceland, about Villí and his mother, about how much we miss all of them.”

“Not for a while. They’ve put new Covid restrictions in place again. Maybe next summer.”

“I miss them too. And Uncle Hilmar. He tells the best stories.”

“We’ll be talking to them Sunday,” said Sean, “Now have a good sleep.”

“It’s just the smoke. Smoke gets in my eyes.”

“Com’on Slow-Poke,” she said. She wasn’t usually this impatient for although it was a warm evening and she looked forward to these nightly walks with her dog the smoke from nearby forest fires was starting to get uncomfortably dense. Since the Covid crisis hit, the Urban Horticulture Center grounds were generally empty and it was, for Seattle at least, a relatively quiet area. She was thinking about the over-all thrust of her book about Mary, Sean and Jo. She knew that she had harbored a resentment against them for a variety of reasons: they were successful, Sean and Mary had a daughter, they had a nanny, and, most importantly, they were a real family of sorts. A family was a thing that, since her brother died, she didn’t have.

And what did she have? A deaf old dog, a weird old man who wanted to fuck her, and a book that nobody wanted to read. Her agent had returned her sample chapters and outline, with a note saying that ‘The material in this book is not of sufficient interest to warrant further promotion.’ “Maybe they’re right,” she thought. Suddenly, the dog’s leash went slack. She turned around and saw her dog lying still on the ground. A man, holding a strange gun-like device, was standing over Slow-Poke.

The man put the weapon in a pocket in his cargo pants and began calmly began walking toward her, holding what appeared to be an asthma inhaler in his other hand. Barbara turned to run, but he had already grabbed her shoulder and began pulling her toward him. As he lifted the inhaler to her mouth, a shot rang out and the left side of the man’s head exploded as he collapsed.

Another man, this one wearing a badge on a lanyard that hung from his neck, stepped out of the smoky shadows of a nearby hedge. He pulled out his phone and barked some orders into it.

“Special Agent Marchal, FBI,” he continued, “Sorry about your dog, I was too late to save him.”

“What happened?” asked a visibly shaken Barbara, “Who is that man? And why did he kill my dog?”

A half-dozen men dressed in black converged on the scene.

”I think you had better come with me,” said Marchal, “We’ll discuss this downtown. One of my men will take care of your dog.”


Next Chapter: Fire on The Mountain