This is chapter 51 of The Inheritance, a serial fiction novel on FITK 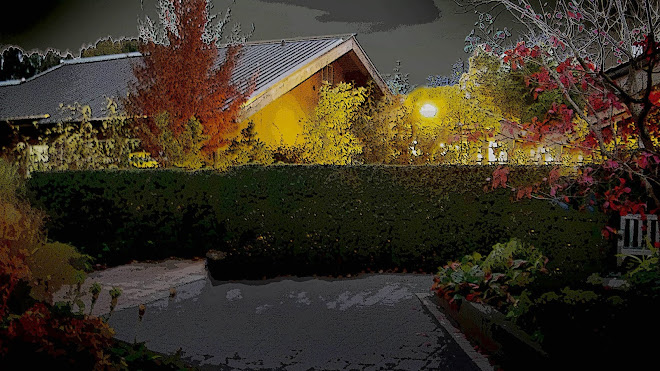 Mareka and Jo were in the bedroom of Jo’s apartment. They were going through some of Jo’s childhood effects.

“Oh! Look at the time, our movie is going to be on in five minutes,” said Jo, “I’ll put some popcorn on. Will you put that stuff back in the box for me?”

“Okie-doke,” said Mareka. Jo went into the kitchen and Mareka lifted the box from the floor to the the couch where they had been looking at Jo’s albums, “This is heavier than it looks,” thought Mareka. She looked inside and saw, under a stack of large envelopes, the glint of a gun barrel.


The panel van smelled of tobacco and sweat.

John Stroud was in the back, sitting on some tarps with one of his Russian contacts. The other Russian was driving, it seemed to John that they were taking a circuitous route, perhaps it was to avoid traffic cams. Finally it came to a halt in a residential area. It was dark, evidently the street light was out.

“Come up here, Stroud,” said the driver, “You see the house with the yard light?”

“Good. There is a driveway in front of it, with a long hedge. The hedge will keep you hidden. Go left along the hedge until there is a gap with a path. The woman you want is in the small house at the end of the path. She lives alone, but there are neighbors nearby, so be as quiet as you can, and work as quickly as you can. Once again, when you are finished text us and we will pick you up here. Do you understand?“

“I’m good with it,” said Stroud, “Let me savor this one a little while.”

“Okay, but If you aren’t back here in fifteen minutes you’re on your own.”


A drug task force team was monitoring the tracer that had been placed in the Russian ‘goon squad’ van. The Seattle Police had been tracking John Stroud in relation to the recent overdose deaths that had plagued the city’s homeless population. They had been tipped off that he had been seen in the company of two ‘foreigners’—a couple of bad eggs that had been associated with a Russian “safe house” that had been supplying and sheltering agent provocateurs in the riots of the previous summer. They wanted to deport them to prevent any Russian influence in the drug scene in Seattle and had been trailing the van all night. When the goons dropped Stroud off at the ballroom they parked a short distance away and then picked him up a short while later. The police didn’t know if the ballroom building was were Stroud was scoring or if it was where he was dealing. That location would be dealt with later, but tonight they were more interested in seeing where Stroud and the Russians would lead them. When the goon’s van stopped in a residential area, far from Stroud’s usual haunts, they took action. Two of the undercover cops got out of the tracking car and set off on foot, following Stroud in the dark.

“I’ll be right there,” said Mareka.

A cacophony of caws suddenly erupted from the nesting crows outside the apartment.

“What on earth is riling them up?” said Jo, opening the front door and looking out.

“Inside, bitch,” hissed John Stroud as rushed in and pushed her back, “And keep your mouth shut or I’ll shut it for you.”

“Get out of h-,” said Jo as she received a punch to the face that sent her reeling.

“You never would listen, would you?” said Stroud, “Well you’re going to listen now.”

Jo was down on her hands and knees when Stroud kicked her in the side.

“Get out,” said Mareka, who had just entered the room, holding a stuffed toy bear.

“Oh ho! So you have a little nigger baby do you?” said Stroud, “Hey little girl, you‘re just in time to see me kick the shit out of your momma.”

“Aren't you afraid? Cuz you better be,” said Stroud, taking out his syringe case and bending over Jo’s prone figure, ”When I’m through with your momma here, I’ll make you wish you’d never been born.“

“GET OUT!” Mareka said, dropping the bear, revealing the handgun that she had found in Jo’s effects.

He got up and lunged at the child, crossing the room to get where Mareka was standing.

He received two bullets in his torso and one in the head for his trouble.

“I’m not afraid of you,” said Mareka as she watched him fall to the floor.

“He was going to kill us,” said Mareka, putting down her gun and pointing to Stroud on the floor, “I wouldn’t let him.”

“Shots fired. Suspect is down and incapacitated,” said one of the policemen into his radio.

The other one examined Stroud at gunpoint. Stroud was sucking air through two holes in his chest and then coughed up a large mass of blood. He was still holding the syringe when he shuddered and then went still.

“Are you hurt, ma’am? Do you know this man?” said the officer who was talking on the radio.

“He’s my ex. He was going to kill us. I’m banged up, but he’s beaten me worse than that before.”

“Subject has gunshot wounds to his body and head and appears to have expired. Recommend apprehension of accomplices before EMT services arrive. Situation here is under control. There is also one woman down, may need medical assistance and one child apparently unharmed.”

“Roger, we're closing in on the van now.”

The officer who had been examining Stroud turned to Mareka.

“I’m officer Nelson, I’m here to help you. What’s your name, are you OK, is this your mother?”

The crows outside increased their clamoring.

“I’m her mother,” said Mary, who had just walked in with Sean, “We heard shots.”

“We live in the main house, Jo is a family friend and Mareka’s governess,” said Sean.

“Is there anybody else here?” asked the officer who was with Mareka.

“This is all of us, Jo lives here,” said Mary, “Mareka lives with Sean and me in the main house.”

“We’ve been tracking Mr. Stroud here as well as his accomplices, there is active police activity in the area. I’m going to ask you to stay put until the all clear.”

Just then the radio crackled: “Suspects apprehended without incident. EMTs are on the way.”

“Okay. Since this is a crime scene, I’m going to ask that you all leave, are you able to walk, Ms?”

“We’ll be in the kitchen, in the main house,“ said Mary, “Through the patio doors, where the lights are on. You’ll want statements?”

Next Chapter: Wrap Up