This is chapter 50 of The Inheritance, a serial fiction novel on FITK 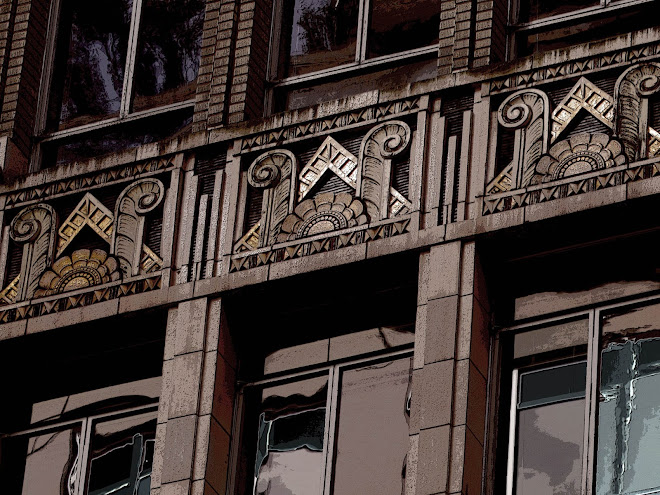 “The crows are really raucous tonight,“ said Mary, “I think they plan on roosting in the trees by the creek. Are they here to see you, Mareka?”

“My pals! I did give a wave to some this afternoon,”said the girl.

“Usually a change in animal behavior is the sign of some disturbance in the natural world, said Mary, “Is there anything going on that I should know about?”

“They’re working on that pier that sank, and removing what’s left of the old Alaskan Way,” said Sean, “But none of that should affect the crows. Usually they head over to Kenmore at dusk.”

“What have you got planned for this evening, Mareka?” said Mary.

“Jo and I are going to look over some pictures and stuff she has from when she was young.”

“That’s right, I’ve been telling her about my girlhood and there are some photo albums and a scrapbook I got from my mother’s house. The movie channel is going to show a Cary Grant movie about him being stranded on a tropical island with a bunch of school girls and their teacher… Father Goose, it was a favorite of mine when I was nine. I wore out a VHS tape of it. We can have popcorn too, if you like.”


Barbara Merrit and Marcel DuPage were partaking of a candlelit dinner in Marcel’s apartment above his dance studio/ballroom.

The couple’s previous week had been one of exploration, as much psychological as physical. Barbara had found Marcel to be, under his flamboyant personality, a kind person and a generous lover. Marcel was taken with Barbara’s intensity, understandable in light of her now abandoned quest to make sense of her brother’s death.

“Now what?” said Barbara, “Now that you’ve destroyed all my hang-ups? I am woman, hear me roar!”

“I’m equally wrecked, my kitten,” Marcel said with a laugh, “When that Covid vaccine finally arrives we’ll go see the world. Until then we’ll just have to settle for this little patch of paradise, just us.”

“I’m swimming in the thought of ‘us’, oh, Marcel, you have made me so happy.”


John Stroud stood across the street from Marcel DuPage’s studio building. He had beeen casing the place for nearly a week but Barbara Merrit had yet to show her face. Marcel had been down to receive deliveries of food and mail, but didn’t venture from the door to the apartments. There were eight units in the building, the Russians had given Stroud a diagram showing where Dupage lived, with Merrit, they assured him that she was definitely staying there—they had placed a bug in her computer. The Russians had also told him how to jimmy the outside security door and had given him a passkey they had made from a copy of one of the other tenants key they had ‘borrowed’ while the tenant was at a bar. All Stroud had to do was to let himself in, and surprise them with two special syringes filled with lethal doses of Fentanyl.


Mareka and Jo were in Jo’s guesthouse apartment, looking through the box of things that Jo had brought back from her mother’s house. The photo albums had a story or two on every page, Mareka was entranced.

“Were you happy then? You look like you were happy in these pictures,” said Mareka, “Or were you sad sometimes?”

“I was happy when I was younger. When I got to high school, not so much. The other kids were mean, not just to me, but to each other, too.”

“Why were they mean?”

“I don’t really know. We were all pretty much the same, city kids, nobody was rich, just ordinary kids. It was like there was a Covid virus then except for meaness. Everybody caught it. I had it too.”

“What happened after you graduated?”

“I worked with some midwives, helping mothers have their babies. I did that for several years. Then I met John. He was handsome, funny, I thought he was cool. We got married.”

“You were happy then, right?”

“Not very long. I found out that I married a drug addict and dealer. All he cared about was drugs. When he didn’t get his way he’d take it out on me. I left him, got a divorce, and a restraining order, so that he had to stay away from me.”

“No, he came back and beat me. That’s when I left Spokane, that’s when I met your folks.”

“Is that man ever coming back?”

“It happened after I first settled in Seattle. I was in bed and I woke up and heard noises in the kitchen, and then footsteps coming down the hall. I thought it was John. I had a gun and when the man came into my bedroom and on my bed I shot him.”

“The police said it was someone looking for someone else, someone that used to live where I was staying. He was never identified.”

“I didn’t know you were so brave.”

“I wasn’t brave, I just didn’t want to live in fear anymore.”


John Stroud was in.

The Russians were good. The door the Marcel’s building jimmied open just the way they said it would and the passkey they gave him worked like a charm. In Marcel’s apartment Stroud could hear sounds of love-making coming from down the hallway that started at the door. He walked calmly toward the bedroom. Its door was open. The lights were out in the room, but he could see the lovers silhouetted by the window shades. Barbara was on top, her hair hanging down. The figure beneath, Marcel, no doubt. He stepped quietly up and deftly inserted the first syringe into Barbara’s carotid artery. Barbara gasped and convulsed while Marcel, his eyes closed, began to groan. Stroud used the second syringe on him in the same way. Marcel shuddered and heaved as Barbara fell onto him.

Stroud waited until he was sure they were both dead before placing a syringe in the hand of each victim.

The Russians had said they’d bring him to his final destination after the first hit was complete. Stroud took out his burner phone and texted the Russians. They replied that they would be in front of the apartment in two minutes.