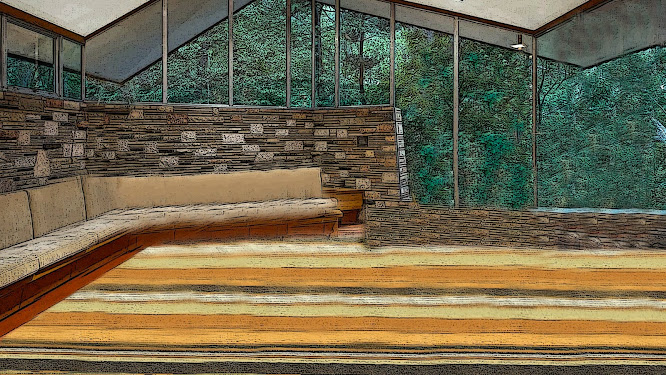 It was a definite cut above playing in the toilets.

A reunion gig, some of the guys from a band that broke up years ago were getting together to play the old tunes, if not for one last time, then maybe for the second to last time. Never say never again. It had been what-40 years? 50 years? A golden wedding anniversary. Scott, who had started the band, was first to show up.

The host of the affair, a roadie who had “made it”, in the monetary sense at least, had recently purchased a mid-century modern house with a high-ceiling great room. ‘Inspired by Wright’ said the real estate listing and for once the hyperbole matched reality.

“Will this be enough room?” Tom said to Scott, pointing out an area of the great room that had been cleared of furniture.

“Bigger than the old stage at Sam’s,” said Scott, “And, being that we’re mostly geezers now, we won’t need as much space for dancing.”

“We’ve got the perfect summer night for it,” said Tom, “Any surprises tonight?“

“If I told you then they wouldn’t be surprises, would they?”

“I wasn’t expecting anything big,” Tom said, “Maybe the horns would be in tune for once?”

“Now that would be surprising… I wouldn’t get your hopes up.”


Tom thought back on that summer years ago: we were young; the girls were beautiful; everything was glorious; anything was possible. THE SUMMER. The band was playing every week, finally getting into a groove, having some money was nice, too. And it was truly glorious, at least for a couple of songs every night. Kevin, who had way too much talent to be playing the club scene, was on fire. His vocal performances would often stop the show—people stomping and screaming until the band would play an instrumental just to give him a break. Everyone else in the band had improved too, excepting Ned, the drummer. It was an odd situation. He was technically the most advanced musician in the group, his mastery of rudiments and his previous experience in a variety of musically differing bands—each playing at a high level—should have been a perfect fit for the situation, but the only thing that really fit him was a twelve pack of Special Export beer—“green death”—his beverage of choice. The previous winter’s gigs had been great, transcendent at times, but by summer Ned had upped his intake of barley pops and, by the time of the Labor Day LSD caper, he was history. Although the other drummers that auditioned were capable, none could supply the solid foundation that the group needed. It was a nervy decision that I was glad I didn’t have to make. He didn’t act like he held a grudge, but his death from COPD a few years previously made it a moot point.


“Look who’s here! The Queen of the Egg Dance!”

It was Izzy, the wildest of the party girls back then—the pot-stirrer. The years had not been kind but she still had that smile that made all the guys in the band fall in love with her. Her memories of that summer were somewhat different:


The abortion summer. That’s how I will always remember it, three procedures among six of us. The love songs the band played were a dirty trick. Or was that how it has always worked? Rock ‘n’ roll hoochie-koo. We were only 18. Not that that’s an excuse, our mothers were mostly married by 18, but they got old in a hurry and spent a fair amount of time crying. But the guys in the band weren’t in any hurry to grow up. After that summer we did put our collective feet down—no more abortions. Later, a couple of us did marry some of the guys in the band and we did have babies. I dont think our kids made our mistakes, not that I’d know, the morning-after pill, you know.


The band members began filtering in, Doug, the only drummer who had been in the old group who was still alive, began assembling his kit. It was a small one, but plenty big for this space. Cal, the band’s first drummer, quit because he didn’t want to be playing in a rock band when he was thirty. After he left he stopped drinking and joined the Army, was stationed in Alaska where he picked up a heroin habit. He was dead by the time he was fifty. Go figure.

Seeing Doug always brought up thoughts of the old homestead for Tom. Located in an inner-city neighborhood, the house was sandwiched between junkyards and light industry. Doug had lived there after Tom moved out.


The old house had seen its share of parties, one of the older neighbors remembered that it had once been a tippling house in the 1930s. She also remembered the “horse-faced woman” who entertained teenage boys in the back bedroom. There was also a stash of “medicinal” whiskey bottles that had been left in the attic by a serious drinker. The previous owners were Hispanic, nice people from San Antonio, who had sold the house to us when the freeway expansion plans feel through. Because of that we were left in limbo for several years. We did have a good twenty-year ride and made out OK on the resettlement deal when the freeway did go in. We had our share of house parties, none a classy as this one, but the idea was exactly the same, except for the egg dance: ‘A little song, a little dance, a little seltzer down your pants.’ Friends old and new, getting together, kicking off our shoes, forgetting the crushing weight of our mundane lives for a few hours.

“It’s a definite change,” said Doug, “The pandemic made me sit down and actually think about what was important in my life. It is nice to be back gigging again.”

“It’s good to see everyone,” said Tom, “Everytime we get together it feels like it could be the last time.”

So glad there is a new story! "Special Export beer—“green death”" I haven't heard that in decades, but it was also one of my favorite beverages when I could afford it. Not that it was expensive, just more than Pfeiffer or Red White and Blue.

I believe it was over 6% ABV at a time when most domestic beers were under 5%.
It actually had a distinct flavor, a little hoppier. It is still available but it isn't the same, made by Pabst now.