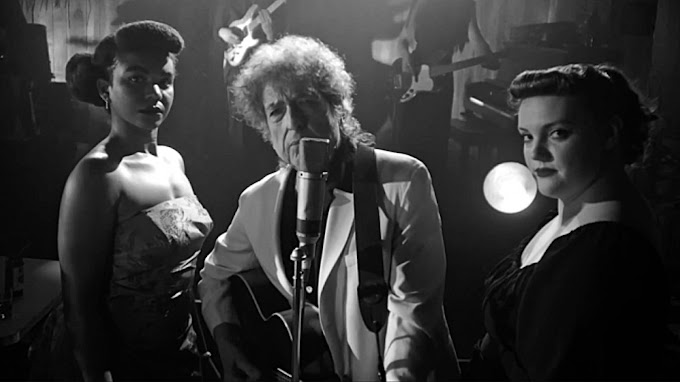 Bob Dylan is on a roll.

For someone who’s nearly a decade older than me, his creative endeavors in the past few years have been astounding. It’s as if The 2016 Nobel Prize in Literature ignited a new artistic passion in the man.  Bob has been busy creating sculpture, painting, whiskey and with his successful Rough and Rowdy Ways/A Murder Most Foul release last year, continues to write and perform great new songs, recently embarking on an acclaimed new tour.

But the kicker of all this activity for me is the moody art-film Shadow Kingdom: The Early Songs of Bob Dylan (directed by Alma Har’el) that streamed last July.

In it a dapper Bob and four masked musicians mime 13 songs from Dylan’s back catalog. Set in a seedy nightclub (Club Bon-Bon) that is beyond time and space, it is a monochrome neo-noir fantasy that could be sometime in the late the 40s to early 60s: vintage clothes, everybody is smoking, Bob is right there in the midst of it all, singing, emoting (in his fashion), and so close to the people in the club that they could touch him (and do in one instance!) I could give you a summary of each bluesy song but if you haven’t see any of it yet and the idea of seeing Bob in this setting might appeal to you, check it out below. A little short of an hour, it sounds best on headphones. The songs seamlessly segue, each has been reworked and performed beautifully. The visuals are stunning and ambiguous enough to keep Dylanologists occupied for years. There is even a tenuous Icelandic music connection—both the director and the music producer (Alex Somers) have worked with Sigur Rós, and Somers produced Pascal Pinon. One of the musicians is Shahzad Ismaily, who produced JFDR’s first album.

If you see it below it hasn’t yet been taken down from YouTube:

It's still there, so far. I did a few quick segments and it sounds like a very mature Dylan in many ways.