This is chapter 29 of Window Weather, a serial fiction novel on FITK 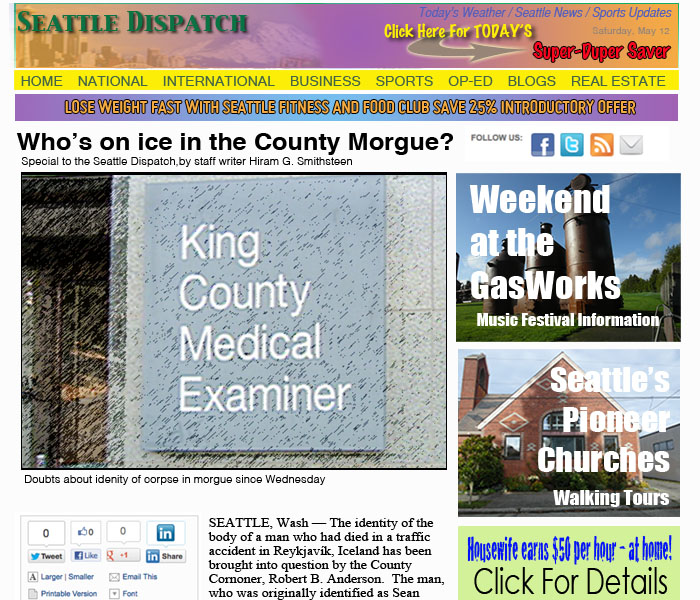 ... Carroll, 33, worked at Applied Diffusion Research, a Seattle based data processing firm. Coroner Anderson gave this statement:
"After comparing dental records from multiple sources, it was conclusively shown that the body was not that of Mr. Carroll. We are in the process of confirming the actual identity of the body, we have received information pointing to a person of interest, but are withholding the name pending additional confirmation."

Mary Robinson shifted her gaze from her laptop to the large screen that was monitoring the network which was analyzing Billy Clarkson’s ‘evidence’ file. A column of names began to scroll down the screen. The most linked name was the Senator’s, followed by one she didn’t recognize: Roger Bannock Ramsen. A quick search revealed that he sat on the boards of several corporations which held defense contracts. He was wealthy from old tobacco money and was a ruthless behind-the-scenes D.C. insider who was known as having a knack for getting what he wanted. 72 years old, a widower, with a daughter, Nora, 40. Nora Ramsen Clarkson was the second wife of Senator Clarkson. Roger Ramsen had been linked romantically with a certain Sally O’Donnell, 47, the divorced wife of one of his business rivals.

Mary let this new information sink in. It was obvious that she would be dealing with some heavy hitters. She initiated an extensive search on Sally O’Donnell. While that was running she returned to the list: Numerous Russian names, possibly arms dealers, some Syrian and Iranian connections. Afghan drug merchants, African warlords. Billy had done his homework well. After a few minutes, the search on Sally came up: images from society galas (some with her on the arm of Roger Ramsen), news clippings, and even a Twitter feed. Mary wondered if the Twitter account belonged some other Sally, so she clicked on it. The profile image matched. Mary scrolled back to late April. Most of her tweets were banal—social affairs, books read, movies seen—but the one from May 1st commanded her attention:

SallyOD@SallyODonnell:Leaving Seattle tomorrow for a week with the Elves and Trolls in magical Iceland: http://www.iheartreykjavik.net

She had been on Sean’s flight!


Sally O’Donnell came into Sean’s hospital room alone. She was holding a shopping bag in one hand and a cell phone in the other.

“I’d like to talk to the doctor about that,” said Sean. He wasn’t in pain, but he had only been stitched together for a couple of days and had been given stern warnings about moving about on his own. The wound was still seeping a bit and he was on a liquid diet. Sean wondered if Sally would be his nurse, or if she intended to leave him in the capable hands of Herbert.

“We will see to your medical needs. This is not a secure facility.”

Sean pressed the button for the nurse.


Mary Robinson sat in her office, pondering her options. If she did break Billy’s information, the chances of it being tied to Applied Diffusion Research were pretty good. If she didn’t release it, she shuddered to think of what might happen to Sean. Or to Molly. The first scenario it would mean the end of ADR and put her and her twenty employees out of work. The second scenario would mean the ruin of two innocent lives. Mrs. R had delayed taking any action for nearly a full twenty-four hours. Her desk phone rang. The caller ID indicated it was from in-house. She picked up.


Molly had just returned to her room—a storeroom full of books. It also had a cot, a sink, and a toilet. It was located above her friend Alice’s bookstore. Molly had used it before. She had just picked up a takeout order from a nearby Chinese take-out. She sat down on the cot, next to a table made from a double stack of old encyclopedias and a piece of plywood. She arranged food, first transferring it from the paper boxes it came to porcelain dishes. “I may be hiding out,” Molly thought, “But that doesn’t mean I can’t be civilized.” She set her iPad next to the food and then, when her ritual was complete, touched the local news app. Her eyes opened wide when the top story came up.


Sean’s call for the nurse was answered by three F.B.I. agents, one was the agent who had tried to interrogate him when he had been in intensive care. The other two were younger and unfamiliar.

“Going somewhere?” said one of the younger agents as he looked at the clothes which had been laid out on the bed.

“Who are you, Ma’am, and what are you doing here?” asked the other young agent.

“I-I-I’m a friend of the family, I was just bringing Billy some clothes,” Sally said, terrified.

“She wanted me to leave with her, against doctor’s orders,” said Sean.  He wasn’t going to play the Billy game anymore.

“Why don’t you come with me, Ms. O’Donnell?” said one of the younger agents, as he took her hand and escorted her out of the room.

One of the remaining agents sat down in the corner. The older one stood beside the bed.

“We’re going to have a little talk, Mr. Carroll,” said the older one.