dina Amin is an industrial designer who creates inspired stop-motion animations from common objects. My favorite (so far):

Hot Fun in the Summertime 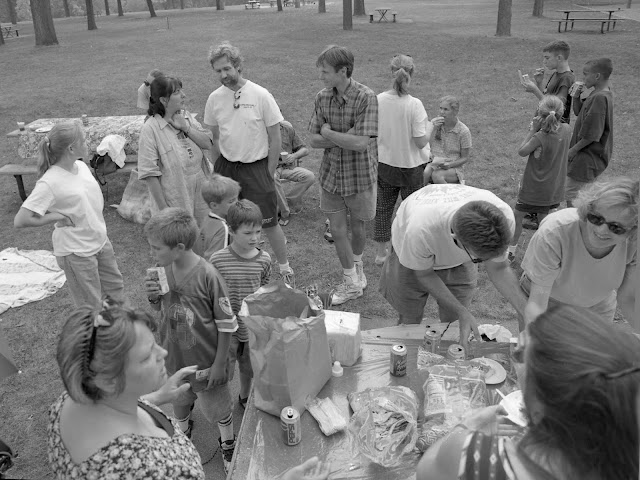 A summer picnic, tons of kids, all the couples were still together, no worries.

It is easy to burnish these memories: time smooths the rough edges.

Time diminishes the glory of those days, too.

Some of us still get together, and the kids, grown-ups now, are all still with us.

But it will never be quite the same.

Boop-boop-ba-boop-boop when I want to
Out of school, yeah
County fair in the country sun
And everything, it's true, ooh yeah


Until the start of the 2018 Iceland Airwaves music festival, that is. I’ll be there, on the scene, with daily updates on all the finest Icelandic music I see (and hear) performed. Until then, I'll be sporadically posting images (and videos if available) of some of these fine musicians: 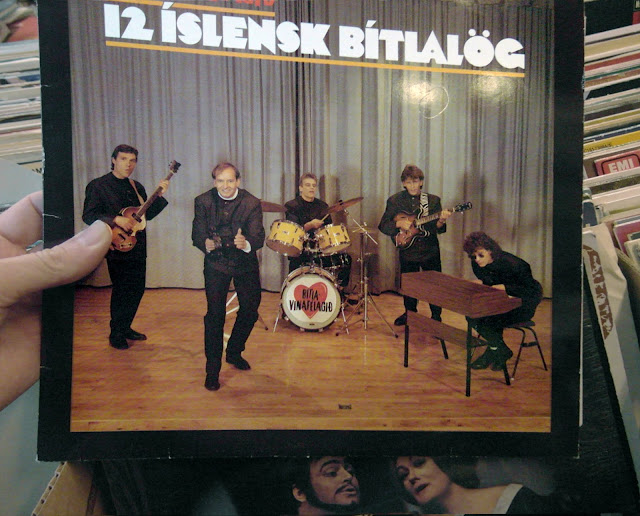 Bitlavinafelagið (Bite the Friend's Club?) was an Icelandic pop band from the 80s:

I Dig the Nightlife #1

On the advice of my music guru (Tom Surowicz), I headed out to The Schooner Tavern last Tuesday night to catch King Kustom and the Cruisers:

Bill and Ernie Batson have been mainstays of the Twin Cities music scene for over 40 years now, in this group (specializing in obscure 50s rock-a-billy and garage rock),The Hypstrz (similar, but faster) and The Mighty Mofo's (similar but punkier). Dressed in complimentary bowling shirts, the brothers served up a raucous stew of crowd-pleasers: 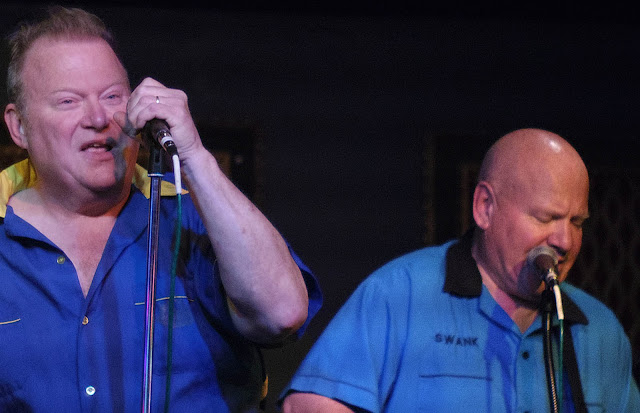 This woman (selling pull-tabs) made a surprise “guest appearance” when she went home for the night: 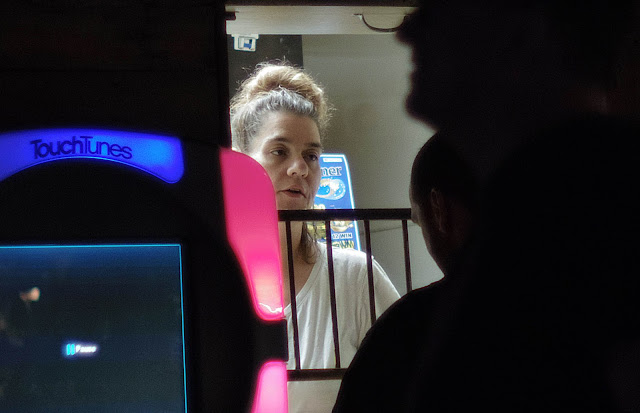 The booth’s only door opened to the stage and she had to walk between the brothers!

Some of the patrons found other amusements more enticing: 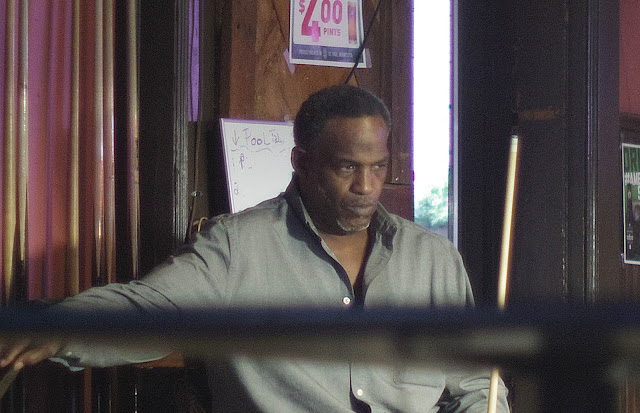 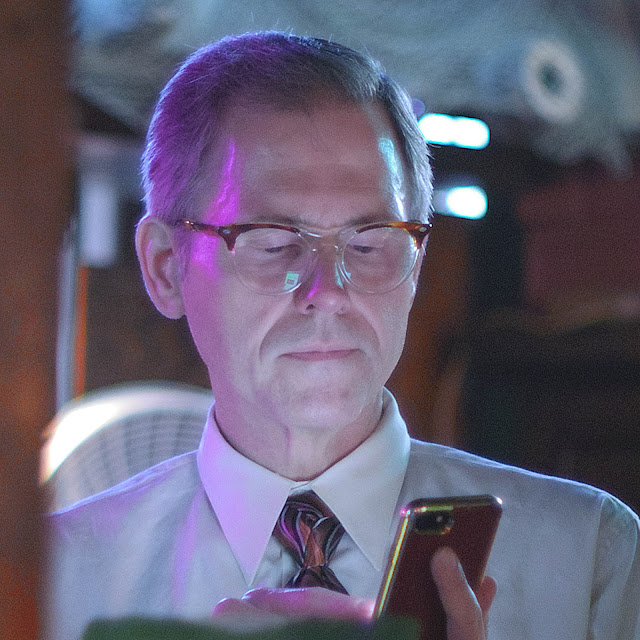 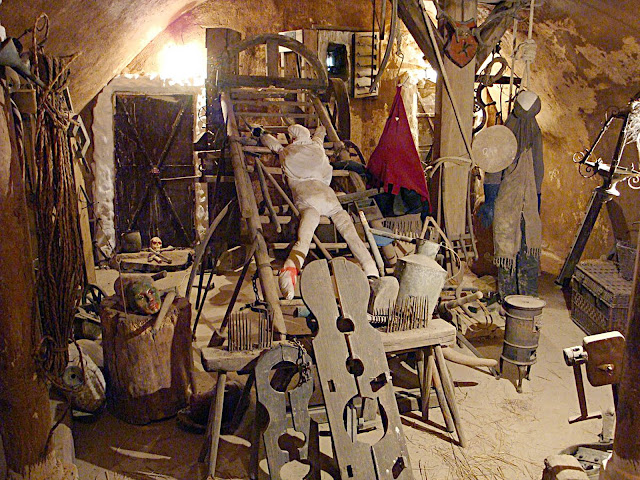 It all started with a pore on my nose.

For several months I had an enlarged pore, right on the tip of my nose. It didn’t hurt but would seep for a couple of weeks, then heal over. After a couple of cycles of this I went in for a checkup.

First, a general physical (my B.P. was high), then a referral to a dermatologist for my nose (biopsied) and, finally, a colonoscopy follow-up (the previous one was five years ago.

So, what did I get for my efforts?

The nose was benign, it’s fine now, it healed on its own.

The colonoscopy was fine too—at least that’s what they tell me. I was completely out for the duration (yay Fentanyl!) and pretty loopy the rest of the afternoon. I don’t think I’ll have another—they aren’t recommended for non-risk geezers. While being prepped I did have some ruminations on my future health procedures: I’m not looking forward to it. 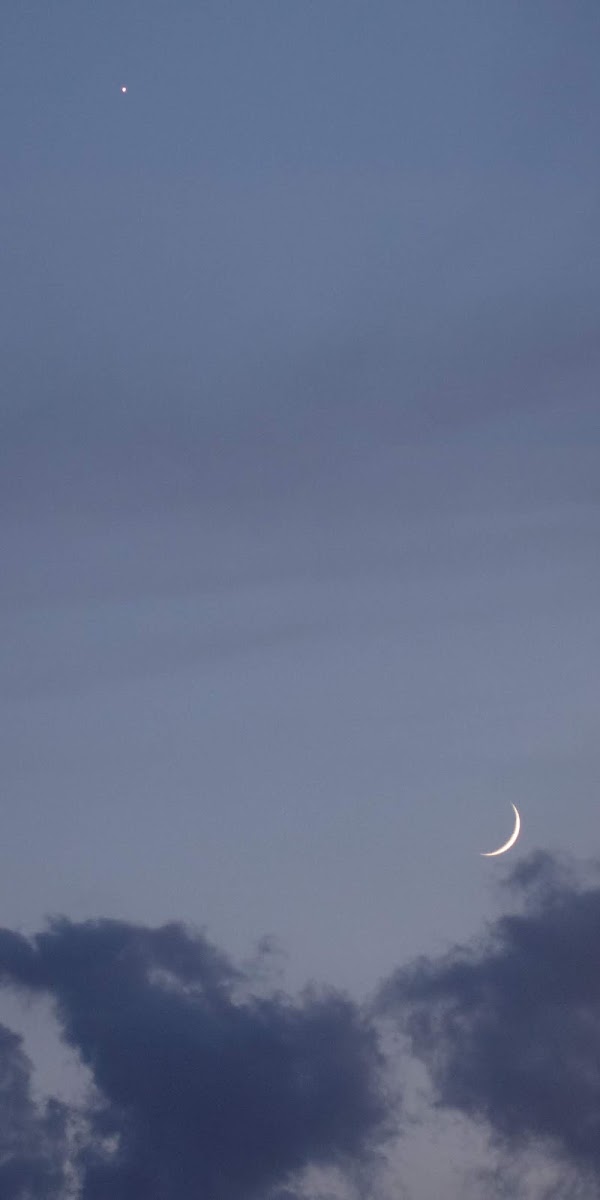 There will be a brief pause in FITK posting during which the Professor will be having some quality time with his gastroenterologist. 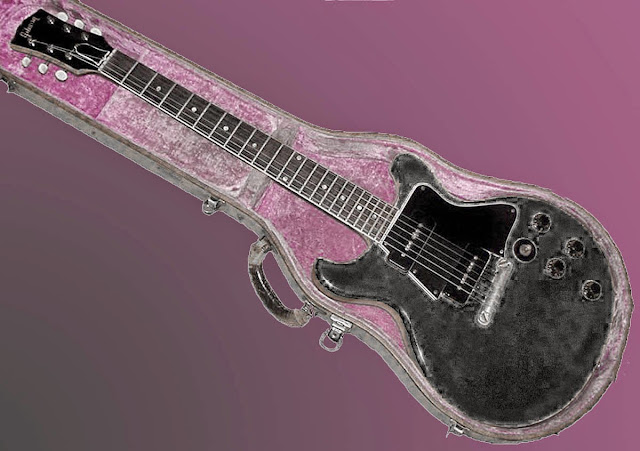 The one that got away. This was a guitar which had been repaired; broken necks were common with this style. Mine had been stripped of its original TV Yellow finish: it was a dirty white which I quickly covered with black enamel. I got it at Bell Music, a short-lived music store on West Broadway which also had a small practice studio in the basement— under a pizza parlor—you weren't allowed to play with your amps turned up!

I bought it in 1965, for $50 and my Vox in trade. When my high school band, The Others, broke up, my mother wanted me to get rid of all my band stuff, which I foolishly did. If I only had one guitar in my whole life, this would be the one. I sold it to a neighbor, who resold it to a classmate. He restored it but I have no idea where it is today.

They sell for big bucks now. Yours truly on stage with The Special: 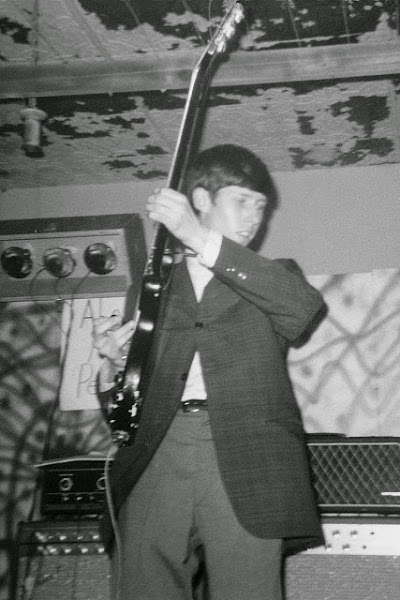 In 1943, the U.S Government began issuing stamps commemorating countries that were occupied by the Axis powers in World War II. The series was somewhat controversial in that none of the the Balkan States were pictured, nor was China (Manchuria.) Some people thought that Austria was properly considered part of Germany. But one country that was occupied, albeit by the British, Canadian and United States, was Iceland. The Icelandic invasion and subsequent occupation was pretty much a strong-arm tactic, done to prevent Germany from establishing a naval base. It remains a touchy subject for some Icelanders, although it has faded from discourse since the U.S. closed its naval base there in 2006.

Or, as Alda and Auður would say: “Þetta reddast!”

To make up for the historical oversight, here is my Photo-shopped rendition: 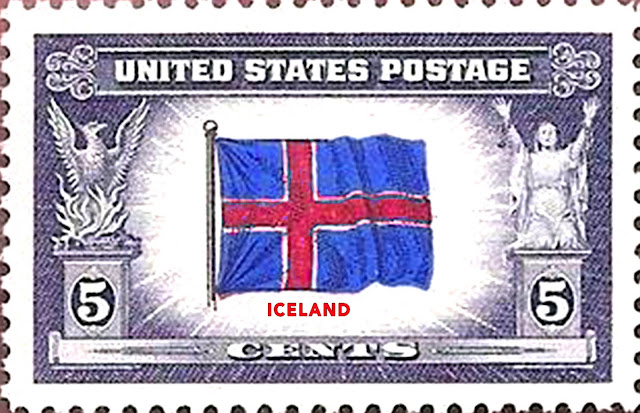 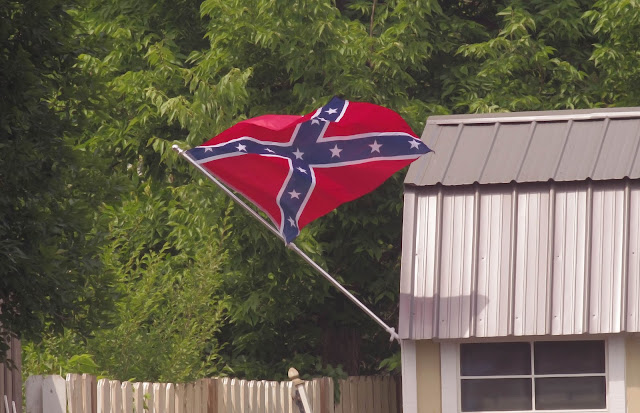 My hometown is generally free of provocative displays.

This "Confederate" flag sprouted on a neighbor’s shed recently. This flag is a distillation  of various Confederate battle flags; since the Civil War it has become a divisive symbol often used by white supremacist groups and popularized by films (Birth of a Nation, Gone With the Wind) as well as in the TV show The Dukes of Hazzard.

Its appearance here comes at an odd time; there have never been so many minorities in our town, most of whom have assimilated very well.

I can’t see any good coming from this.

UPDATE: This Confederate flag has now been replaced by a US flag. Have more reasonable minds prevailed, or was it just a case of poorly chosen yard decor? 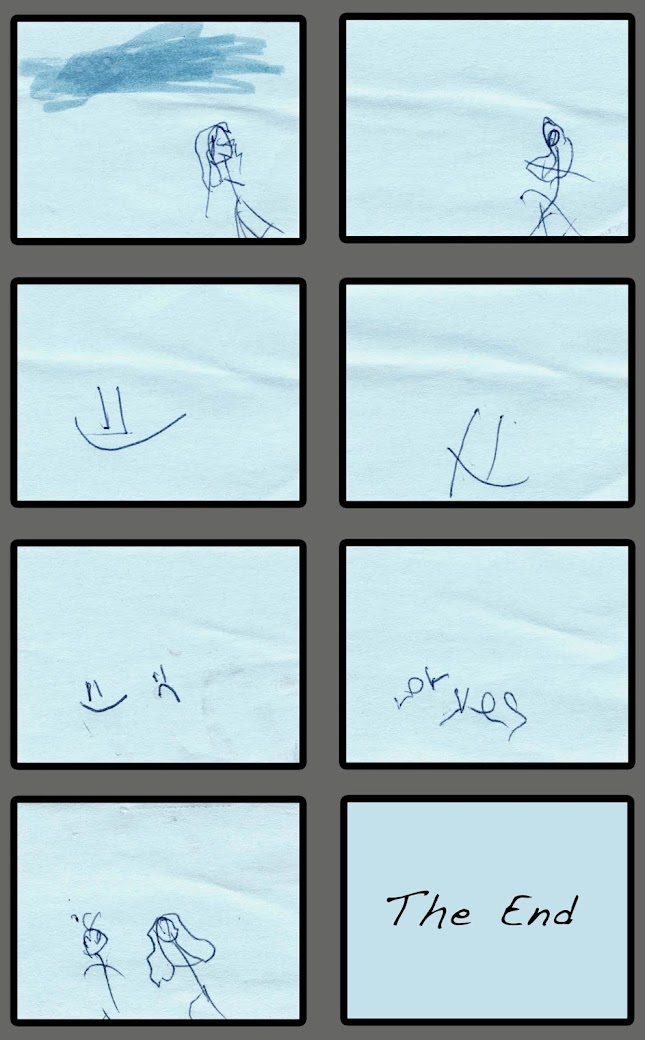 A pad of Post-its dropped by a child - school is out!

I must have liked the color. Live and learn, I guess. 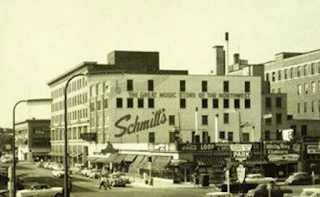 This one did come with a fiberboard case though—which even had a lock and key. I traded my Alamo Fiesta and too much cash for it, buying it new at Schmitt’s music in downtown Minneapolis. Schmitt’s was a traditional store: specializing in pianos, sheet music, band and orchestral instruments. The rock revolution sort of caught them off-guard, their guitars and amps were on the third floor, in small showroom, usually filled by pimply teen-aged boys (i.e., ME), who were a far cry from their usual clientele. The lack of a bridge that could be intonated and its non-adjustable neck made this even more dismal than the Alamo. And, it was manufactured by a cabinet-making factory in rural England! I did manage to play a few gigs with it, however: 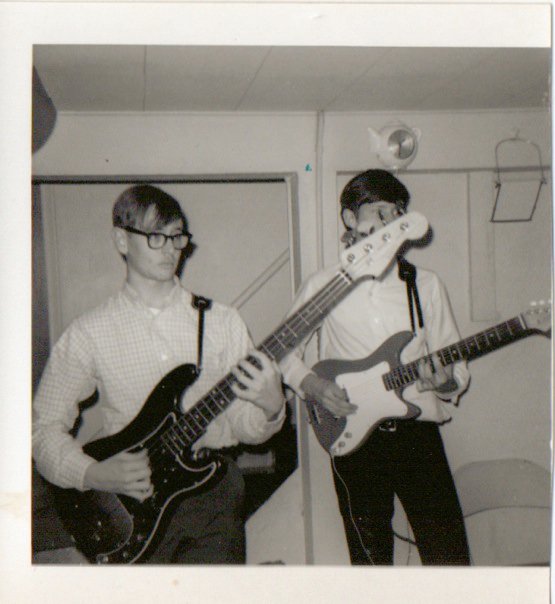 I soon wised up and traded it in on a REAL GUITAR, a 1959 Les Paul Special.

A noodle-ly YouTube video that somehow suits this undistinguished guitar: 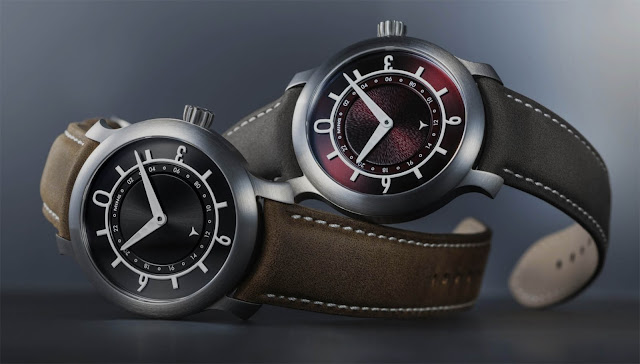 The old Timex Forester I had worn for twenty years had given up the ghost. It was a cheap watch to begin with and I never liked it. I should rephrase that. I had the Timex for twenty years, but I seldom wore a timepiece. But I have found a watch to be essential in my world travels—sometimes you just have to be at a certain place at a certain moment. I thought about the Apple Watch, a fabulous thing to be sure, but much too much for me. The Ming Thein watches shown above are considered “affordable” in the classic watch world, but not in mine. I find it interesting that they are priced almost exactly the same as the latest top of the line ceramic Apple Watch: $1300.

Leaving the world of luxury watches aside, I began to prowl the almost infinite offerings from Amazon and eBay. A much cheaper (and funkier) option was an Indian HMT, a 17 jewel mechanical watch. It was still being made, by hand, up until a few years ago. A mainstay of Indian police, military and railroad workers for half a century, they came in a variety of styles and colors; refurbished models are about $18.

I did actually buy this Tonnier “Naviforce”, a brand-new military style timepiece, less than $10 new, it came directly from China: 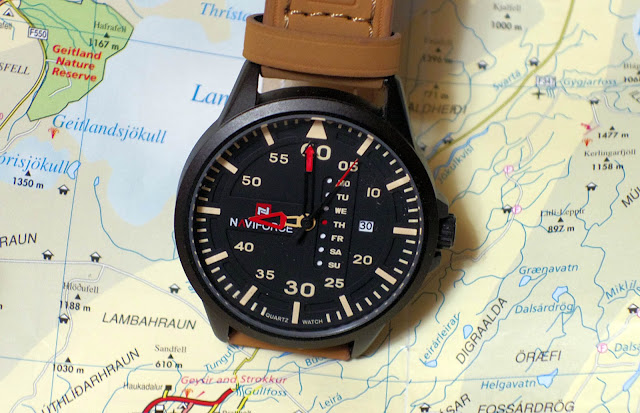 It was too bulky so I finally sprang for this sleek Danish design ($70): 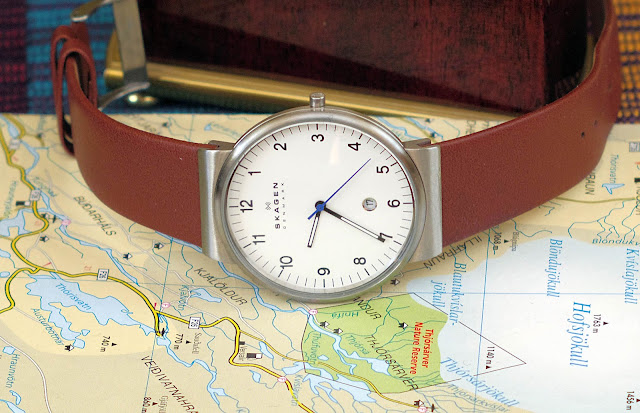 Scandinavian enough for my Iceland trip although, if I really wanted to go all out, there is a watch manufacturer in Reykjavík: