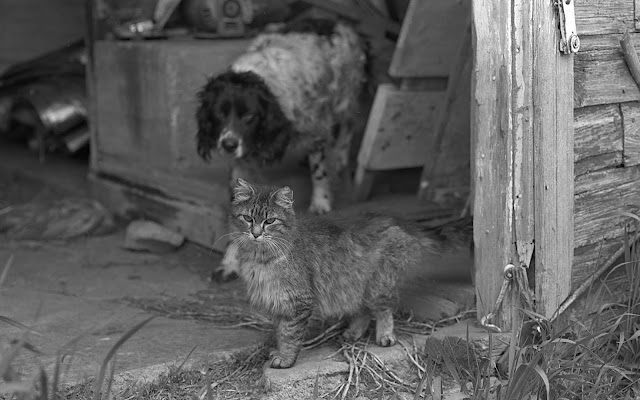 
The barn cats have lives of their own, unencumbered by human bonds.

The farm dog knows to keep his distance. 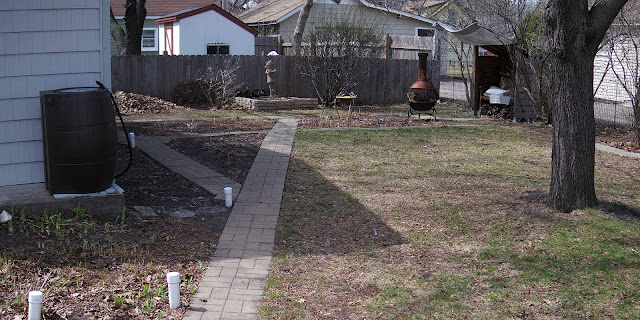 The grass is greening up slowly; tomorrow’s rain will accelerate that trend.

All the trees and bushes are budding; they’ll be fully leafed out by this time next week.

The near-term forecast is for mild temps; Spring is rolling out easy this year.

The outdoor statuary has been uncovered; flower beds are cleared.

The patio furniture has been put out; all the early spring chores are done. 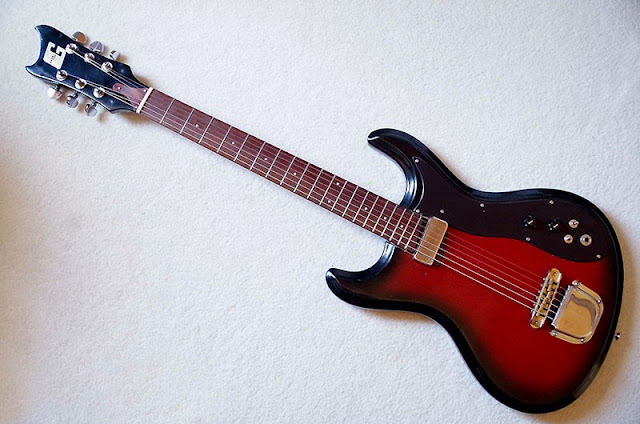 Guyatone was once a powerhouse of Japanese guitars. In the late 50s to the early 70s they made millions of guitars, both for the Japanese market and for export. This Mosrite-inspired LG-30 was made in the mid 60s. It was a 'beginners' model and although it was well made it was not without its quirks. The neck width is constant from the nut to the body- certain Silvertone and Harmony guitars of the 60s also had this characteristic. It means that the string spacing is rather narrow at the bridge, not the best for large hands. I bought it in pieces from eBay, it was missing the bridge, nut, pick-guard, pick-up, controls and tuners: 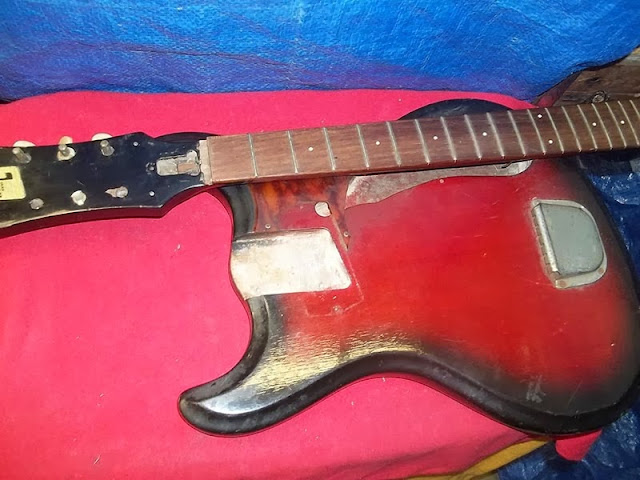 The narrowness of the string spacing made finding a workable bridge a bit of a challenge. I found a 70s era brass bridge that had never been notched. The long-tongue bolt-on neck also was a challenge, I had to get a very thin pickup (Guitar Fetish 'jazz' style) in order to make it fit: 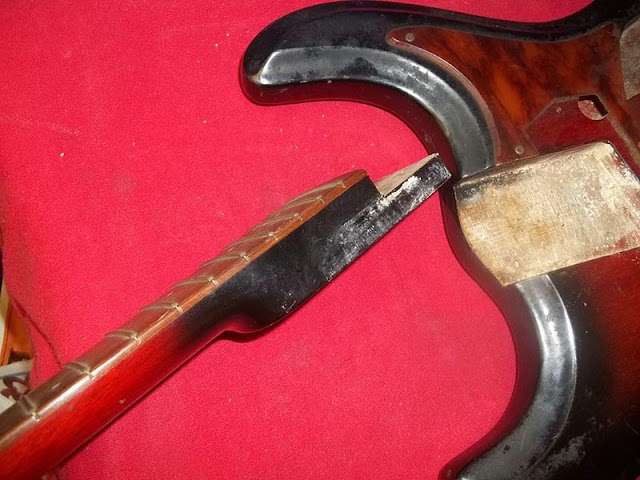 A new pick guard and some basic wiring turned this into a pretty nice little guitar. The body was solid (plywood) and the D-shaped neck was in very good condition, certainly worth the $40 I paid for it.

I ended up redoing the pick guard in tortoise, and installed a pair of P-90 pickups with a custom wiring scheme: 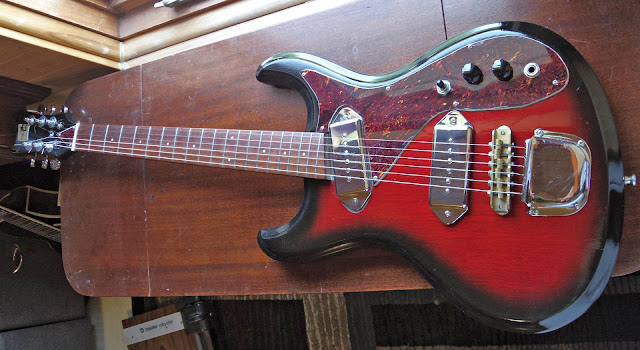 It was sold in the Great Guitar Purge of 2019, I hope the new owner has as much fun with it as I did! 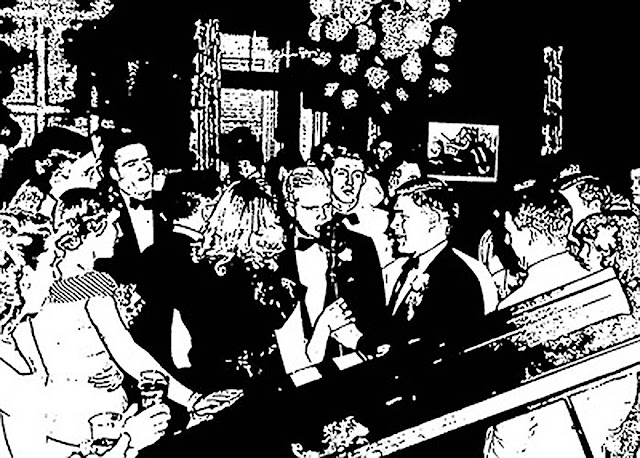 Let me tell you about the very rich. They are different from you and me. They possess and enjoy early, and it does something to them, makes them soft where we are hard, and cynical where we are trustful, in a way that, unless you were born rich, it is very difficult to understand.


It was a routine scan job. Bigger than most, but not the biggest I’d ever done. When you actually get down to the nitty-gritty of it, I was a glorified xerox operator converting old photos into 1's and 0's and then putting them on shiny discs of aluminized plastic.

I had settled into a pleasant, if not exactly stellar, career peering into other peoples’ lives. The best part of the job was that every day there was something different: new wrinkles on family dynamics, history as told by a folding Kodak, a moldering pile of images and clippings, frozen moments in time, glaciers of images.

That particular morning I had worked most of the way into a large photo album. There were over one hundred pages of nearly a thousand snapshots pasted on rough black paper, dating from the turn of the 20th century until the early nineteen- fifties. One of the girls in the album was having her debutante ball in the old Lafayette Club. One photo in particular caught my eye. In it a group of young men in tuxes were standing around a microphone. In the center of the group was The Golden Boy.

The Golden Boy was as close to a sure thing as could be found on the prairies of Minnesota. With a family history in banking, The Golden Boy would grow up to create his own fame and wealth: in investments, in pro sports, in politics. He ran for governor once but his blood was a bit too blue for farmers and laborers to rally around him, his real power in the political sphere was nonetheless as strong as if he had actually been elected. Buildings with his name would grace colleges in the state; he was not stingy with his success.

But all that would come later. This night, the night of the photo, he was letting loose and singing with the abandon of youth. A leader, even then, his well-oiled blond hair glowed as if afire, The Golden Boy in his greatest glory.

Of all the girl-groups I saw at last year’s Iceland Airwaves music festival, the most vibrant was Gróa: 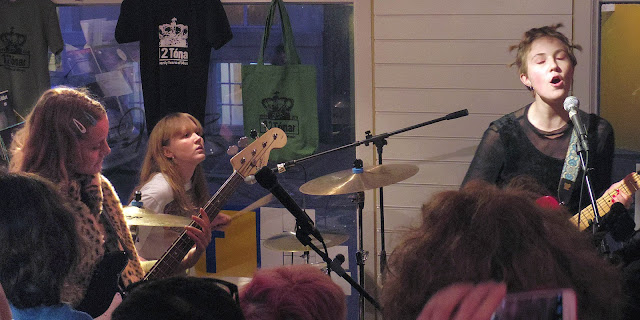 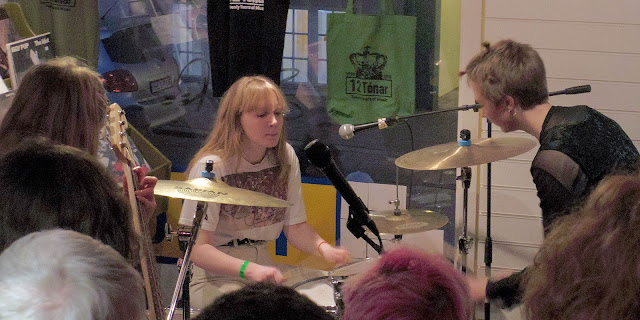 Hrafnhildur lays down the groove 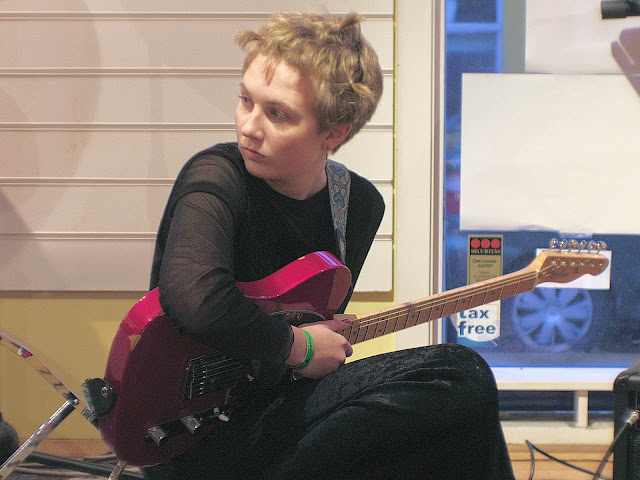 Karólina takes a moment for reflection before the show 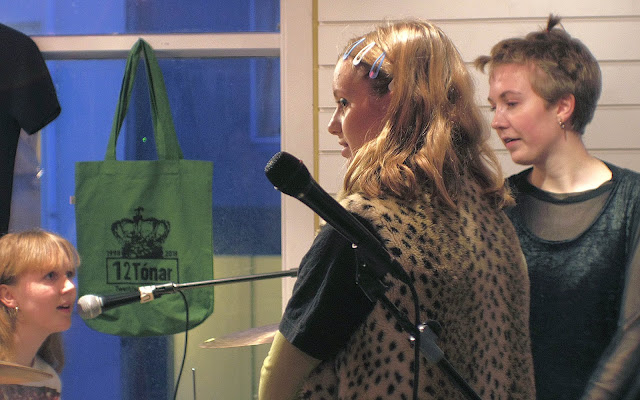 The group discusses their strategy 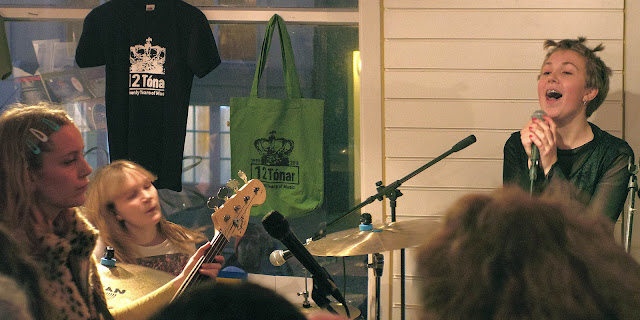 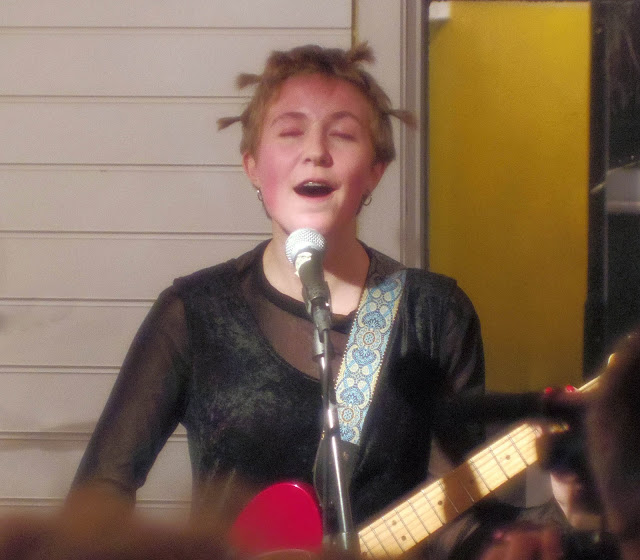 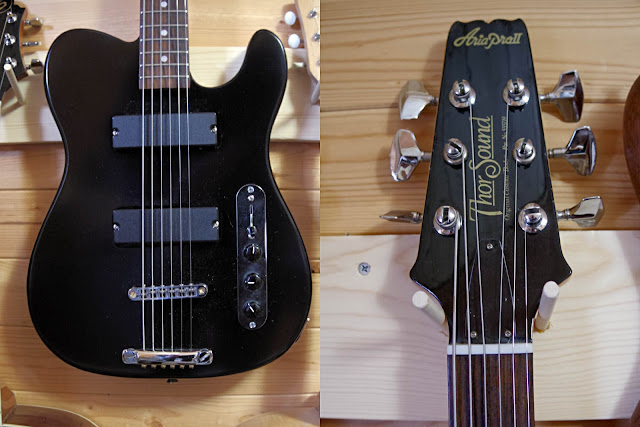 Made from a recyled AriaProII "Thor Sound" 22 fret bass neck and a Telecaster body. The neck was originally for a 4 string bass, but they conveniently left space for the two additional tuners. Fitting a new nut, two generic 6 string bass pickups, and a GFS roller bridge made this into a very usable instrument. It is a mid-scale neck tuned A to A and yes, you can play chords on it. I used Balanced Tension Circle K Strings to get the right intonation.  Standard Telecaster switching, with independent volume and master tone controls, completes this package. 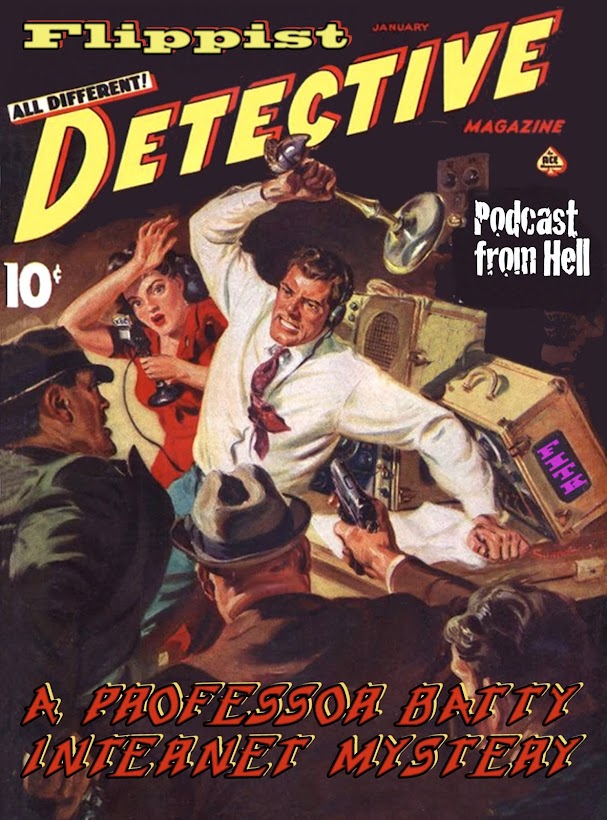 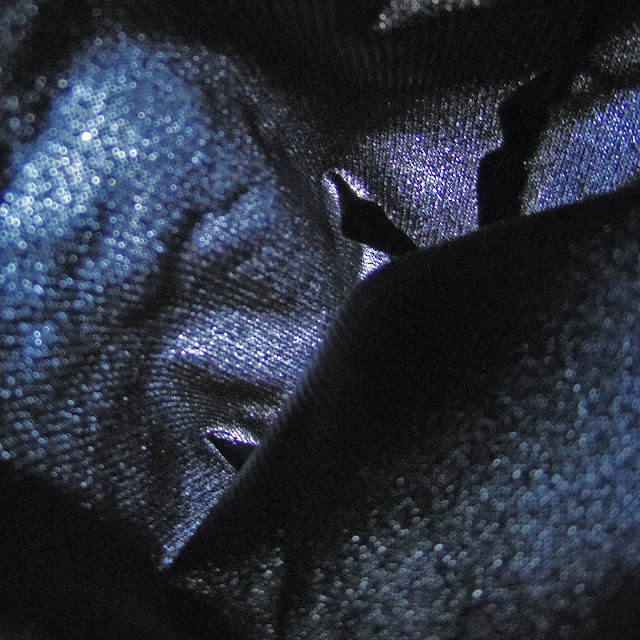 3 a.m. and the nightmare returns.

An unresolved issue from the previous day?

Or an unresolved issue from my childhood?

Or an unresolved issue from a previous life?

Or is it an unresolved issue from the pizza I ate for supper? 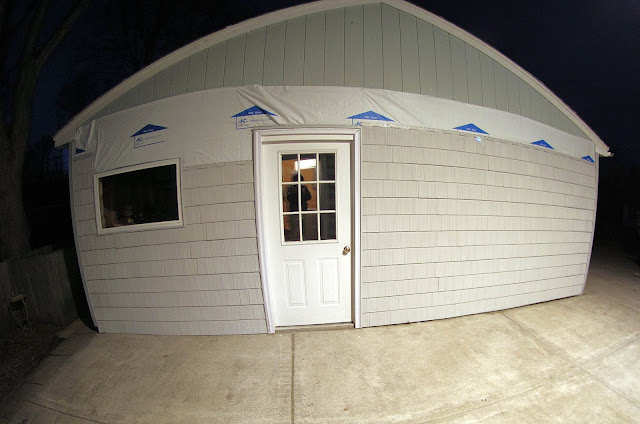 After 30 years I finally decided to put vinyl siding on my garage. It was shethed in painted plywood and. frankly, it was looking pretty shabby—the paint was flaking off and I wasn’t in the mood to scrape it all off and start over. A sale at the local “home improvement” center tipped the deal. My biggest beef with vinyl siding is that it looks so bad but some newer styles don’t show the seams like the old stuff. We’ll see if it can handle a hail storm.

I didn’t stop there.

I had been looking into pressure washers for a long time. My driveway/patio has been neglected for as long as the garage. While looking at the Amazon reviews, I actually found a review from someone I knew. He had owned several previously and he thought this AR Blue Clean was the best one yet, so I bought it: 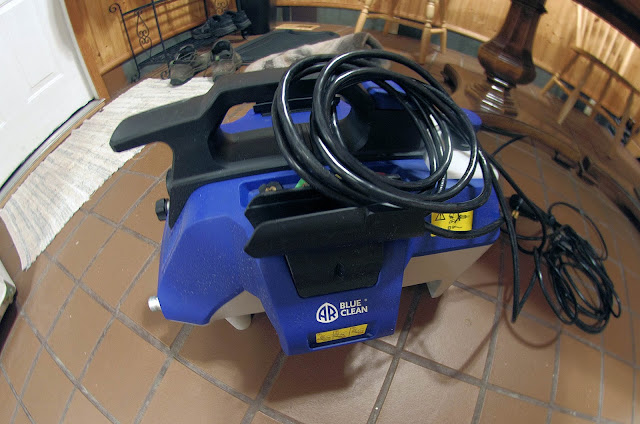 We had one warm day this week and I used it to clean off the worst of the gunk from our concrete. It worked as promised, although the real revelation was in using it to edge my sidewalks. I’ll never spade again!

I’ve joined the dark side of suburban consumerism, I’m afraid.

As per the quote above:

Hippies in the Heartland III 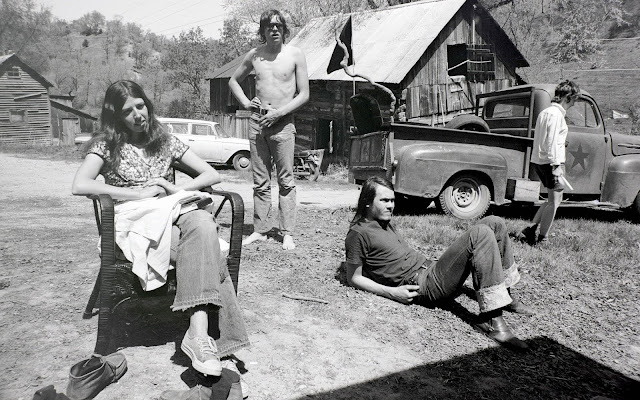 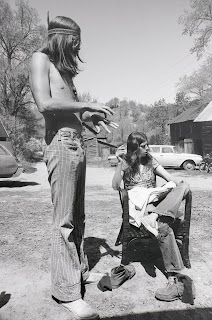 The “trip” was set up by my film-making teacher at the University of Minnesota.

I had nothing going on in my life since returning to the U after a year at the community college. The chance to spend a weekend in the country appealed to me.  There wasn’t going to be any instruction (sort of like his class), this field trip was a chance to get away from my bleak home scene. We met Saturday morning at the old art building on campus and our caravan made its way to an old homestead farm located somewhere in southern Minnesota. There was a faction trying to make a soft-core porn flick but the rest of us of us just hung out. I took some pictures but was uninspired. I was in my militant sobriety days then which probably explained a lot. Including my lack of social skills. When night fell I set up my tent beside an idyllic burbling brook where I managed to get to sleep despite the friendly mosquitoes. A while later the sounds of footsteps and the glare of a flashlight outside the tent woke me up. The local sheriff had gotten the notion that a “hippie invasion” was taking place and was prowling around, looking for some “heads” to bust. I feigned sleep and he eventually left. His visit took the damper out of the festivities; the next day things just kind of petered out and we went back to the city.

The “Hippie” movement didn’t die at Woodstock, not even at Altamont. It lingered on into the degenerate 70s in various ways, mostly as a back to nature movement, even giving rise to a new form of consumerism.  It didn’t require much effort: let your hair grow, get some tattered second-hand duds, pick up a nickle bag and a pack of Zig-zags and you were all set. In a way, it still exists as a default. Kicking back on a week-end with in comfortable clothes, an adult beverage of choice and, maybe, even some cannabis if the laws where you live have changed to allow it. 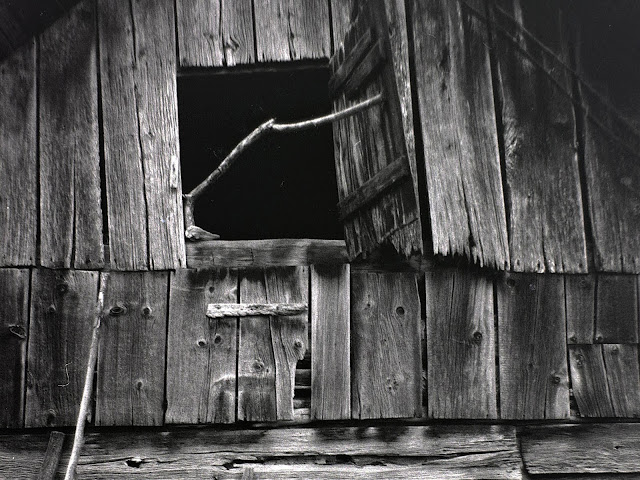 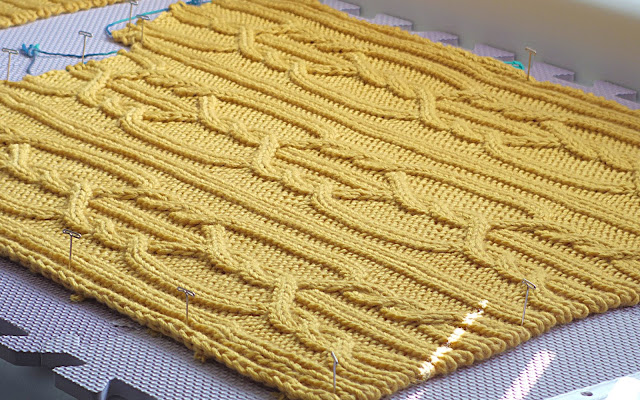 Another of The Weaver’s projects, half of a cable knit vest.

Knitting is one of those things that I appreciate but don’t understand.

How such intricate three-dimensional designs can be created using only yarn, two sticks and fingers  is way beyond me. Weaving I can suss out a little, the grid helps.

One textile worker who was a cut above was Anni Albers, one of the Bauhaus instructors who went on to become a seminal force in the modern artistic textiles movement. For a time she lived in a house that had also been lived in by Estrid Bannister Good, the muse/translator/editor that I had written about before. I still get hits on that piece, and even a comment from someone who knew Estrid. The house still stands, Anni and her husband Josef bequeathed it to an artist’s residency—Carraig-na-gcat—that looks tempting. If I had a worthwhile project (another novel?) it would be a truly worthwhile experience. From the prospectus:


Carraig-na-gcat is best suited for visual artists, as well as for writers, but all genres are welcome, the only criteria for applying being a true dedication to whatever you do. In order to benefit the most from their stay, participating artists must be open to let go of possible strategies of self-representation during their time at Carraig-na-gcat, and willing to live without Internet, while instead dwelling into the process of working, without knowing the outcome in advance.


That last part about “… not knowing the outcome in advance… ” fits me to a T in my artistic endeavors. 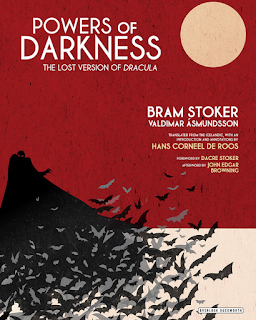 Whew! This book took me on a strange trip into a more obscure part of the Dracula canon.

When Bram Stoker first published Dracula he made an effort to get it translated into as many languages as possible. Valdimar Ásmundsson was an Icelandic scholar who dabbled in many things literary. He evidently hit it off with Stoker and this was the result. Originally published in serial form, it was assembled into a book and subsequently reprinted in Icelandic a couple of times, it remained largely unknown to the English-speaking world for over a century. It has now been translated: with copious notes, a foreword by one of Stoker’s descendants, and even Bram Stoker’s original introduction.

None of this would matter much excepting that this book is quite different from the original English version; it is much sexier and is even more political—the Count comes across as sort of a 18th century Transylvanian Donald Trump. In another twist it has characters not in the Stoker book, but were in Stoker’s original notes! The first part of the story, with Harker in the castle, is greatly expanded, while the second part, with the Count in England, is merely sketched out.

I found it fascinating that Iceland, with a population of about 70,000 in 1901, could produce such a book. There is also a Swedish version! Who knows what other treasures await?